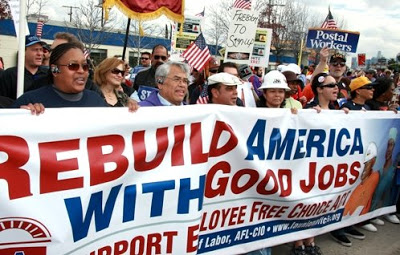 Virtually the entire organized business lobbying apparatus is united in attempting to convince the public that the Employee Free Choice Act is a terrible blow against workers’ rights.

The US is facing its gravest economic crisis since the Great Depression. Last Fall, Congress was stampeded into giving $700 billion to the financial sector with virtually no strings attached. Then Congress refused to authorize less than $20 billion to help two of the US automobile giants stay afloat. One of the reasons advanced was that autoworkers’ wages were too high.

This argument is part of a general campaign that suggests that in the modern era of globalization, union negotiated wage and benefits packages are out of date and counter-productive. This campaign is also aimed at convincing Congress not to pass the Employee Free Choice Act.

Virtually the entire organized business lobbying apparatus is united in attempting to convince the public that the Employee Free Choice Act is a terrible blow against workers’ rights. To hear these individuals (usually lawyers working for firms dedicated to helping employers defeat union organizing efforts) tell it, they and their corporate employers are just sick at heart at the prospect that workers will be denied their rights to a secret ballot election to determine if they want to be represented by a union.

So what is the Employee Free Choice Act? Its major section says, if the majority of workers in a particular company covered by the National Labor Relations Act show that they want to join a union by signing membership cards, then the company must recognize and bargain collectively with that union. Currently, if the majority sign up, then the company may choose whether to recognize and bargain or, as is most common, to require the National Labor Relations Board to conduct a secret ballot election.

Why would such a law be necessary? Why aren’t secret ballots enough? The answer is that employers have proven extremely adept at delaying the vote once the cards are signed and using the time before the vote to intimidate pro-union workers and mislead others by controlling the terms of the debate.

The election campaign with secret ballots is not enough to ensure a democratic process. When people run from Congress or the Presidency, voters have relatively equal access to their positions and the people running have equal access to the voters. Not so in union representation elections. Under the current election process, management has almost unlimited and mandatory access to employees, while union supporters have almost none. This would be the equivalent, in a congressional election, of one candidate owning all the local media outlets and denying the candidate’s opponent any access. In addition, management knows who the employees are, obviously, but union supporters have access very late in the process to a list of their potential constituents.

The argument that absent the secret ballot, “labor goons” will intimidate workers into signing cards even though they do not want to join a union fails the laugh test because management has much more power, the power to deprive employees of their livelihood and to control their pay, hours, and working conditions.

And they use that power. Kate Bronfenbrenner of Cornell University conducted a survey of 400 NLRB election campaigns in 1998 and 1999 for the United States Trade Deficit Review Commission. Her research team found numerous examples of explicit and implicit threats to close the plant if the union won the election. The report (Uneasy Terrain: The Impact of Capital Mobility on Workers, Wages, and Union Organizing, p43) notes that “one in every four employers in our sample discharged workers for union activity.” A major study covering the Chicago area found that 30% of the companies targeted for union organizing fired pro-union workers.

Firing and harassment are against the law but the sanctions are relatively mild (and it takes years to win those cases). Thus, employers routinely employ this tactic and if they do get sanctioned by the NLRB, the fine and back wages become a cost of doing business – well worth the investment because they have kept the union out of their plants.

According to survey after survey, a very high percentage of American workers would like to join unions but they have to this date been defeated by the ability of management to “win” the organizing campaigns in a decidedly unlevel playing field. The Employee Free Choice Act would redress that imbalance.

The great American middle class was built after World War II when a high percentage of the workforce was covered by union-negotiated contracts. As the percentage of the workforce covered by union contracts has declined, workers’ wages have stagnated. In the context of our current efforts to prevent a re-run of the 1930s, we must remember that the key to a prosperous business is a prosperous group of workers who can then buy the products of business.

Congress should pass the Employee Free Choice Act and we must resist the siren song that suggests wage cutting in places like Detroit will solve our economic problems. These are two important steps towards recreating an America where the middle class can rise again.

The Secret Big Business Doesn’t Want You to Know