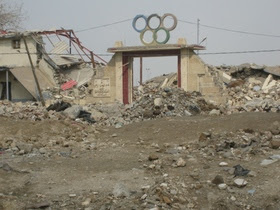 Rubble outside an old Olympic football pitch in Mosul

Iraqis of Mosul speak of suffering

Five years of war have taken their toll on the Iraqi city of Mosul, where people live in fear, many without jobs, electricity or a reliable supply of water.

Engineer Ashwak al-Jaaf lost her husband and the eldest of her six children when unknown assailants killed them following the invasion, writing over their bodies that the pair had been members of Saddam Hussein’s Ba’ath regime.

“When I returned I found that everything had been stolen, even my car. Life is very bad now, dangerous and there are no basic services. This is what happens if you leave a country without a strong leader.”

In certain parts of Mosul, whole roads are lined with mounds of rubble, the remains of a building destroyed by an American hellfire missile or a car bomb.

Sewage runs in the street and the graffiti on walls advertises house after house up for sale.

Mrs Jaaf said that she too would leave again if she had the resources.

“Before the war, life was perfect. My husband was a manager at the Ministry of Oil and we felt very well protected. I am unable to believe that the situation can ever be restored,” she said, blaming the US military for instigating the chaos.

“They destroyed our country and caused many people to be killed because they wanted to oust Saddam and take Iraq’s oil,” she said.

American commanders are working alongside the Iraqi army and the police to stop extremist groups, such as al-Qaeda, from operating in Mosul. Militants, opposed to the US military and US-backed Iraqi Government, have conducted a campaign of killing and intimidation in the city since 2004.

But some local people fear both sides of the fight in equal measure.