Evidence of and Witnesses to War Crimes in Gaza 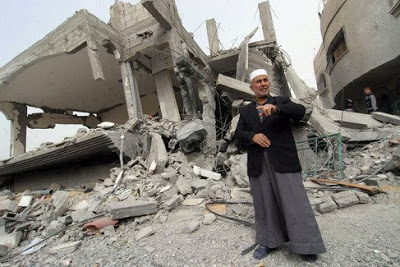 EZBT ABED RABBO, Gaza Strip — Nasser Abu Freeh was one of the first to see the Israeli soldiers as they entered this pastoral Gaza neighborhood overlooking the Israeli border on Jan. 3, hours after the Israeli government ordered the first ground forces into Gaza.

Abu Freeh’s two-story hilltop home is a favorite spot for Israeli soldiers, who used it as a command post during three previous attempts to deter Gaza militants from firing crude rockets into Israel from the surrounding cattle farms, orange groves and dirt alleys.

Scouts from the militant Islamist group Hamas also favored the hilltop as a place to watch for approaching Israeli soldiers, and the fighters tried to lure the Israelis into a trap by planting land mines outside Abu Freeh’s home.

As the Israelis moved in, neighbors said, the Hamas scouts put up little resistance and quickly fell back into the more densely populated part of the neighborhood.

Within hours, the Israeli soldiers took over Abu Freeh’s house, moved the seven people living there into one room and began interrogating the adults. The questioners were angry because one of their soldiers had been killed nearby in the early hours of the ground offensive, and they wanted to know what traps Hamas had set for the Israeli forces.

“Where are the tunnels?” Abu Freeh said the soldiers asked in Arabic. “I will kill you if you don’t tell me.”

Israeli tanks and bulldozers soon took up hilltop positions around Abu Freeh’s home, and Khaled Abed Rabbo’s five-story house in the valley below was one of those in the line of fire.

More than 70 members of his family crowded into one apartment for days. On Jan. 7, Abed Rabbo said, the shelling intensified, and they heard an Israeli solider calling for people to come out of their homes.

Abed Rabbo said he gathered his wife, their three daughters and his mother, Souad. Souad Abed Rabbo said that she tied a white robe around a mop handle and two of her granddaughters waved white headscarves as they walked outside.

When they opened the door, they saw an Israeli tank parked in their garden about 10 yards away.

“We were waiting for them to give us an order,” Khaled said last week as he stood in the ruins of his home. “Then one came out of the tank and started to shoot.”

Souad Abed Rabbo said she was shot as she pushed her son back inside and her granddaughters fell on the stairs. When the shooting was over, she said, 2-year-old Amal and 7-year-old Souad were dead.

The allegation is one of at least five such white flag incidents that human rights investigators are looking into across the Gaza Strip. It’s part of a growing pattern of alleged abuses that have raised concerns that some Israeli soldiers may have committed war crimes during their 22-day military campaign in Gaza.

“The evidence we’ve gathered in two of the cases so far is exceedingly strong,” said Fred Abrahams, a senior researcher with Human Rights Watch working in the Gaza Strip. “All the research so far suggests they shot civilians that were leaving their homes with white flags.”

Along with the white flag incidents, Human Rights Watch is calling for an international investigation into widespread charges that Israel prevented medical teams from helping wounded Palestinians trapped in their homes and needlessly demolished hundreds of houses, including dozens in Ezbt Abed Rabbo.

“This was not a rogue unit,” said Abrahams. “The needless civilian deaths resulted from concrete decisions made by the military.”

The Israeli military, which Prime Minister Ehud Olmert called “the most moral army in the world,” said it’s investigating the increasing number of war crimes allegations, but it rejected any suggestion that its soldiers had targeted civilians.

“IDF forces have clear firing orders,” the Israel Defense Forces said in a statement in response to questions from McClatchy. “But in the complex situation in which fighting takes place inside towns and cities, placing our forces also at great risk, civilian casualties are regrettably possible.”

Throughout the war, Israeli officials said Hamas militants put Palestinian civilians in danger by booby-trapping homes and firing on soldiers from crowded buildings.

However, residents living near Khaled Abed Rabbo all said that Hamas forces quickly abandoned the outlying neighborhood once the Israeli forces took over.

With his daughters bleeding to death, Abed Rabbo said, the family screamed for help.

Samieh al Sheik, an ambulance driver who lived in an adjacent home, heard the shouting. Without thinking about what could be waiting outside, Sheik said he ran to his ambulance, turned on the emergency lights and drove toward the screams.

As he turned the corner and headed for Abed Rabbo’s home, Sheik said he came face-to-face with the Israeli tank unit. The soldiers ordered him to get out of the ambulance and told him to walk straight out of the neighborhood.

“I didn’t see what happened to the family that day because I couldn’t reach them,” said Sheik, who returned to find the ambulance crushed under a demolished building.

Faced with his dying children, Abed Rabbo gathered up the wounded and sought to escape, even if the Israelis opened fire.

With Israeli soldiers shooting at the ground near their feet, Abed Rabbo said, the family walked more than a mile to the main road, where they finally found help. His surviving 4-year-old daughter, Samer, was one of the few to be allowed out of Gaza to receive special medical care in Brussels.

Halima Badwan was less fortunate. As Abed Rabbo rushed his surviving daughter to the hospital, she lay dying in a house nearby.

Halima and her husband, Ahmed, a retired 63-year-old Palestinian Authority general, were among nine people who’d gathered in one room during the fighting. The previous day, Ahmed Badwan said, a tank round had smashed into the room, killing a neighbor and seriously injuring his wife.

Badwan didn’t think he could carry his wife to safety. Red Cross officials in Gaza said that Israeli military officials repeatedly denied their requests to send medical teams to the neighborhood.

So, when the Israeli military began declaring a short “humanitarian pause” to the shooting each day, Badwan said he took his wife’s gold necklace and left her lying nearly unconscious in the ruins of their home.

As he walked out of his neighborhood, Badwan said, he stopped at a nearby ambulance station and asked for help. The International Committee for the Red Cross was powerless to do anything.

Iyad Nasr, a Red Cross spokesman in Gaza, said Israeli soldiers had fired at ambulances that tried to reach some areas, even when medical officials had received approval from the Israeli military to enter certain neighborhoods.

Israel’s widespread denial of access to medical crews in Gaza appears to be a breach of humanitarian law, said Yuval Shany, a legal scholar at Hebrew University in Jerusalem.

“In international law, there is obligation to facilitate access to the wounded and even to treat the wounded,” Shany said. “In this area, I think there was a deviation from the international standard and this should be investigated.”

Using bulldozers, tank shelling and explosives placed in the houses, the Israeli military had leveled entire blocks of homes.

Badwan found his wife’s body buried under the rubble of their building.

The destruction didn’t come as a complete surprise to Taysir Abed Rabbo, who lived in a two-story home near Badwan’s that Israeli soldiers had used as a temporary post.

Abed Rabbo, a member of the Palestinian Authority presidential guard, was among dozens of men who were rounded up nearly a year ago during an operation called Operation Warm Winter and taken to Israel for interrogation.

“They said if we did not stop the rocket fire, they planned to make this area ‘a red area,'” said Abed Rabbo, who said he wasn’t sure at the time what the Israelis meant.

Israeli leaders are moving swiftly to insulate their soldiers from any penalties for their actions during the offensive, which left more than 1,200 Palestinians dead, destroyed more than 4,000 buildings and caused $2 billion in damage.

The Israeli military has barred reporters from printing the names of military leaders who took part in the Gaza campaign, known as Operation Cast Lead, and Israeli Prime Minister Ehud Olmert has created a legal defense unit to protect any soldiers accused of war crimes.

In a defense of his military on Sunday, Olmert accused Israel’s critics of using “moral acrobatics” to question Israel for using its military to try to halt the Palestinian rocket fire from Gaza that’s killed 12 people since September 2005.

“The soldiers and commanders who were sent on missions in Gaza must know that they are safe from various tribunals, and that the State of Israel will assist them on this issue and defend them just as they bodily defended us during Operation Cast Lead,” Olmert said.

While human rights groups are investigating the allegations, Shany said, Israeli leaders should take the lead and investigate allegations of wrongdoing.

[Special correspondent Cliff Churgin contributed to this article from Jerusalem.]