Evidence of War Crimes in Afghanistan Coming to Light

Juan Cole says it as well as it can be said: “I can tell by various web metrics that you guys are not interested in the Afghanistan story. You should be and I am going to parse it today anyway. It is one of the advantages of being non-profit that I write what I want and you can read it or not as you like. But really, you should be following this war.“ 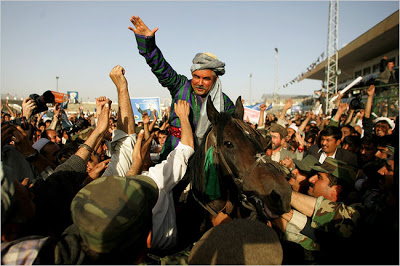 WASHINGTON — After a mass killing of hundreds, perhaps thousands, of Taliban prisoners of war by the forces of an American-backed warlord during the 2001 invasion of Afghanistan, Bush administration officials repeatedly discouraged efforts to investigate the episode, according to government officials and human rights organizations.

American officials had been reluctant to pursue an investigation — sought by officials from the F.B.I., the State Department, the Red Cross and human rights groups — because the warlord, Gen. Abdul Rashid Dostum, was on the payroll of the C.I.A. and his militia worked closely with United States Special Forces in 2001, several officials said. They said the United States also worried about undermining the American-supported government of President Hamid Karzai, in which General Dostum had served as a defense official.

“At the White House, nobody said no to an investigation, but nobody ever said yes, either,” said Pierre Prosper, the former American ambassador for war crimes issues. “The first reaction of everybody there was, ‘Oh, this is a sensitive issue; this is a touchy issue politically.’ ”

It is not clear how — or if — the Obama administration will address the issue. But in recent weeks, State Department officials have quietly tried to thwart General Dostum’s reappointment as military chief of staff to the president, according to several senior officials, and suggested that the administration might not be hostile to an inquiry.

The question of culpability for the prisoner deaths — which may have been the most significant mass killing in Afghanistan after the 2001 American-led invasion — has taken on new urgency since the general, an important ally of Mr. Karzai, was reinstated to his government post last month. He had been suspended last year and living in exile in Turkey after he was accused of threatening a political rival at gunpoint.

“If you bring Dostum back, it will impact the progress of democracy and the trust people have in the government,” Mr. Prosper said. Arguing that the Obama administration should investigate the 2001 killings, he added, “There is always a time and place for justice.”

While President Obama has deepened the United States’ commitment to Afghanistan, sending 21,000 more American troops there to combat the growing Taliban insurgency, his administration has also tried to distance itself from Mr. Karzai, whose government is deeply unpopular and widely viewed as corrupt.

A senior State Department official said that Secretary of State Hillary Rodham Clinton and Richard C. Holbrooke, the special representative on Afghanistan and Pakistan, had told Mr. Karzai of their objections to reinstating General Dostum. The American officials have also pressed his sponsors in Turkey to delay his return to Afghanistan while talks continue with Mr. Karzai over the general’s role, said an official briefed on the matter. Asked about looking into the prisoner deaths, the official said, “We believe that anyone suspected of war crimes should be thoroughly investigated.”

While the deaths have been previously reported, the back story of the frustrated efforts to investigate them has not been fully told. The killings occurred in late November 2001, just days after the American-led invasion forced the ouster of the Taliban government in Kabul. Thousands of Taliban fighters surrendered to General Dostum’s forces, which were part of the American-backed Northern Alliance, in the city of Kunduz. They were then transported to a prison run by the general’s forces near the town of Shibarghan. 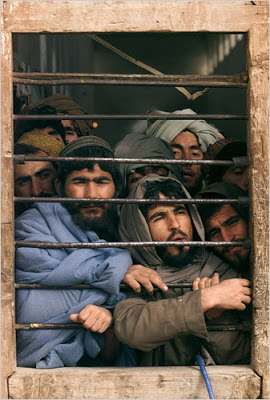 Some members of the Taliban were held at a prison in Shibarghan in February 2001. A mass grave of Taliban prisoners of war is thought to be in a desert stretch just outside Shibarghan. Photo: Claro Cortes IV/Reuters.

Survivors and witnesses told The New York Times and Newsweek in 2002 that over a three-day period, Taliban prisoners were stuffed into closed metal shipping containers and given no food or water; many suffocated while being trucked to the prison. Other prisoners were killed when guards shot into the containers. The bodies were said to have been buried in a mass grave in Dasht-i-Leili, a stretch of desert just outside Shibarghan.

A recently declassified 2002 State Department intelligence report states that one source, whose identity is redacted, concluded that about 1,500 Taliban prisoners died. Estimates from other witnesses or human rights groups range from several hundred to several thousand. The report also says that several Afghan witnesses were later tortured or killed.

In Afghanistan, rival warlords have had a history of eliminating enemy troops by suffocating them in sealed containers. General Dostum, however, has said previously that any such deaths of the Taliban prisoners were unintentional. He has said that only 200 prisoners died and blamed combat wounds and disease for most of the fatalities. The general could not be reached for comment, and a spokesman declined to comment for this article.

While a dozen or so bodies were examined and several were autopsied, a full exhumation was never performed, and human rights groups are concerned that evidence has been destroyed. In 2008, a medical forensics team working with the United Nations discovered excavations that suggested the mass grave had been moved. Satellite photos obtained by The Times show that the site was disturbed even earlier, in 2006. 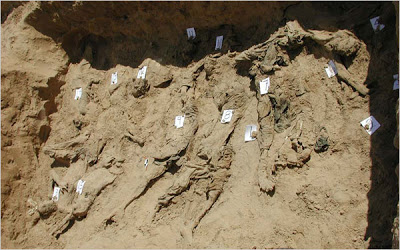 In a 2001 mass killing, bodies were said to have been buried at a mass grave in Dasht-i-Leili. Photo: Physicians for Human Rights.

“Our repeated efforts to protect witnesses, secure evidence and get a full investigation have been met by the U.S. and its allies with buck-passing, delays and obstruction,” said Nathaniel Raymond, a researcher for Physicians for Human Rights, a group based in Boston that discovered the mass grave site in 2002.

The first calls for an investigation came from his group and the International Committee of the Red Cross. A military commander in the United States-led coalition rejected a request by a Red Cross official for an inquiry in late 2001, according to the official, who, in keeping with his organization’s policy, would speak only on condition of anonymity and declined to identify the commander.

A few months later, Dell Spry, the F.B.I.’s senior representative at the detainee prison at Guantánamo Bay, Cuba, heard accounts of the deaths from agents he supervised there. Separately, 10 or so prisoners brought from Afghanistan reported that they had been “stacked like cordwood” in shipping containers and had to lick the perspiration off one another to survive, Mr. Spry recalled. They told similar accounts of suffocations and shootings, he said. A declassified F.B.I. report, dated January 2003, confirms that the detainees provided such accounts.

Mr. Spry, who is now an F.B.I. consultant, said he did not believe the stories because he knew that Al Qaeda trained members to fabricate tales about mistreatment. Still, the veteran agent said he thought the agency should investigate the reports “so they could be debunked.”

But a senior official at F.B.I. headquarters, whom Mr. Spry declined to identify, told him to drop the matter, saying it was not part of his mission and it would be up to the American military to investigate.

“I was disappointed because I believed that, true or untrue, we had to be in front of this story, because someday it may turn out to be a problem,” Mr. Spry said.

The Pentagon, however, showed little interest in the matter. In 2002, Physicians for Human Rights asked Defense Department officials to open an investigation and provide security for its forensics team to conduct a more thorough examination of the gravesite. “We met with blanket denials from the Pentagon,” recalls Jennifer Leaning, a board member with the group. “They said nothing happened.”

Pentagon spokesmen have said that the United States Central Command conducted an “informal inquiry,” asking Special Forces personnel members who worked with General Dostum if they knew of a mass killing by his forces. When they said they did not, the inquiry went no further.

“I did get the sense that there was little appetite for this matter within parts of D.O.D.,” said Marshall Billingslea, former acting assistant defense secretary for special operations, referring to the Department of Defense.

Another former defense official, who would speak only on condition of anonymity, recalled that the prisoner deaths came up in a conversation with Paul D. Wolfowitz, the deputy secretary of defense at the time, in early 2003.

“Somebody mentioned Dostum and the story about the containers and the possibility that this was a war crime,” the official said. “And Wolfowitz said we are not going to be going after him for that.”

In an interview, Mr. Wolfowitz said he did not recall the conversation. However, Pentagon documents obtained by Physicians for Human Rights through a Freedom of Information Act request confirm that the issue was debated by Mr. Wolfowitz and other officials.

As evidence mounted about the deaths, Secretary of State Colin L. Powell assigned Mr. Prosper, the United States ambassador at large for war crimes, to look into them in 2002. He met with General Dostum, who denied the allegations, Mr. Prosper recalled. Meanwhile, Karzai government officials told him that they opposed any investigation.

“They made it clear that this was going to cause a problem,” said Mr. Prosper, who left the Bush administration in 2005 and is now a lawyer in Los Angeles. “They would say, ‘We have had decades of war crimes. Where do you start?’ ”

In Washington, Mr. Prosper encountered similar attitudes. In 2002, Zalmay M. Khalilzad, then the White House coordinator for Afghanistan, made it clear that he was concerned about efforts to investigate General Dostum, Mr. Prosper said. “Khalilzad never opposed an investigation,” Mr. Prosper recalled. “But he definitely raised the political implications of it.”

Mr. Khalilzad, who later served as the American ambassador to Afghanistan, did not respond to a request for comment.

Mr. Prosper said that because of the resistance from American and Afghan officials, his office dropped its inquiry. The State Department mentioned the episode in its annual human rights report for 2002, but took no further action.