Woodstock: The Memories Live On for These Two

Love It: Everyone quoted in the story sounds like they’re still trippin’! 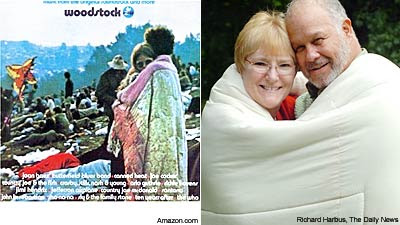 Forty years after the legendary festival in Bethel, N.Y., a photo of two lovebirds taken at Woodstock has become an iconic symbol of love. Having only met three months prior, the picture captures a young couple — Nick and Bobbi Ercoline, both now 60 — embracing underneath a dirty blanket, surrounded by exhausted concertgoers. To the Ercolines’ surprise, the image became the cover of the ‘Woodstock’ album in 1970 and was featured on posters for the subsequent documentary film.

What resonates most about the photo is that it speaks to what many Woodstock veterans consider to be the true meaning of the festival — not just music but a movement of peace, love and unity. In a recent interview with Spinner, Woodstock performer Richie Havens cited a Martin Luther King Jr. speech, saying “It’s not him or him or him, it’s all of us or nothing. That was our thing, that’s what we went against the war with.”

The couple themselves acknowledge the social significance of the now legendary picture. “It’s an honest representation of a generation. When we look at that photo … I see our generation,” Nick told the NY Daily News.

Original Santana percussionist Michael Carabello witnessed firsthand how his generation came together for three days in 1969. “It was about the music and it was about everything else, but it was more about us getting along.” Noting the hectic and exhausting nature of the festival (as evidenced by the background of the photo), Carabello told Spinner, “You know, you get so absorbed in it you just don’t want to hear it anymore, you forget about it, so the only thing you can do is become a family. You just help one another out.”

Certainly Woodstock has been romanticized over the years, but for many, the image of Nick and Bobbi wrapped in a blanket represents exactly what Carabello is talking about.

What’s more, the couple has been together ever since.

This entry was posted in RagBlog and tagged Music, Peace Movement, Woodstock. Bookmark the permalink.

4 Responses to Woodstock: The Memories Live On for These Two