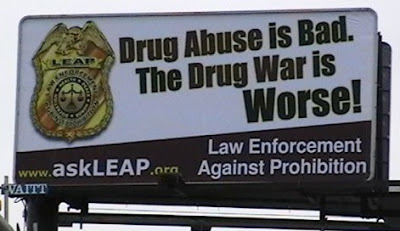 Prohibition will never curb border violence related to the illegal drug trade, nor will it ever reduce any of the devastating consequences associated with illegal drugs. The only way to reduce illegal drug-market violence is to legalize and regulate drugs, putting the cartels out of business.

[Terry Nelson, a native Texan and an expert on border security, was for 30 years a federal anti-drug agent. He now works with LEAP (Law Enforcement Against Prohibition). Please see our earlier report on the El Paso City Council’s action.]

When I learned that the mayor of El Paso vetoed a resolution calling for a national discussion on drug legalization after it was passed unanimously by his city council, I was ready to help my neighbors. The city council had shown the good sense to vote 8-0 to show support for their sister city of Juarez, Mexico, which is overrun with drug war violence. By calling for an open debate on ending drug prohibition, the El Paso city council took a big step in the right direction, and I knew they could use the support of cops who’ve been on the front lines of the failed “war on drugs.”

Emboldened by their research and public comments, the city council members called for an override of the veto, spurring a week-long debate on whether there should be a national discussion about drug legalization. A debate about debating, if you will.

On the southern side of the border, lawmakers are talking about the El Paso debate as well. Juarez lawmaker Victor Quintana, who proposed the Chihuahua State Congress initiate a similar debate in 2008, said, “I don’t think it hurts anyone to initiate this debate, because the drug war has failed all over the world.”

You can be part of the debate by sending a strong message to your member of Congress in support of a national discussion on drug policy.

Unfortunately, the El Paso city council’s override vote ended in a tie, and Mayor John Cook’s veto of the unanimously-passed resolution was upheld. It wasn’t as if the city council members changed their minds on calling for a national debate; rather, four of the eight council members who originally supported the resolution ultimately reversed their votes under significant federal pressure, with three council members specifically citing two letters: one from U.S. Congressman Silvestre Reyes, and one from the El Paso’s state legislative delegation. The letters threatened El Paso with the loss of state and federal dollars if the council voted to override the veto and pass the resolution.

I attended the meeting, and you can view my testimony before the council here. [Or watch the video below.] Also in attendance was an aide to Congressman Reyes, who articulated the threats to the council should the resolution pass.

City Rep. Beto O’Rourke, who championed the council resolution, summed it up best: “It’s a sad day in America when you are threatened for wanting to have an open debate on an issue that is affecting our country and our region.”

As you know, prohibition will never curb border violence related to the illegal drug trade, nor will it ever reduce any of the devastating consequences associated with illegal drugs. The only way to reduce illegal drug-market violence is to legalize and regulate drugs, putting the cartels out of business.

I’m outraged at this blatant use of federal pressure to silence an open discussion, and I hope you are too. Drug prohibition is an issue that profoundly affects our country, and for our elected officials to resort to threats in order to prevent such a necessary debate contradicts the very core of democracy.

When confronted by the Huffington Post, Congressman Reyes said that he is not opposed to a debate on legalization; he only opposed the ‘timing,’ as it would coincide with President Barack Obama’s meeting with Mexican President Felipe Calderon and Congress’s debate of the economic stimulus package. Reyes said, “If it’s still an issue [after the stimulus passes], I’m not opposed to perhaps even entertaining a hearing. I can look at that if they want to pursue it.”

Take action now! Visit DrugWarDebate.com to ask YOUR federal and state representatives to support a blue ribbon commission reviewing the efficacy of drug prohibition. Please help us hold Congressman Reyes to his pledge!