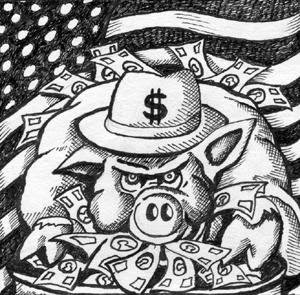 See A government takeover would cost taxpayers, by Chris Isidore, below.

At least the media is challenging the government lies that are so ridiculous on their face that they are a farce and badge of dishonor to officials like Paulson. At least the mainstream media, such as it is, is beginning to expose the big lie that the Fannie Freddie bailout is only going to cost us a mere $25 billion.

Does anyone really seriously imagine that one of the most serious economic problems in the US history, being federal guarantees for trillions of dollars in home mortgages, could possibly be resolved by applying a total of just a little piece of one month’s average citizen’s rent to fixing this problem? Only our Congress would be stupid enough to buy that line of BS.

NEW YORK — When it comes to rescuing Fannie Mae and Freddie Mac, there’s not likely to be any middle ground.

Treasury Secretary Henry Paulson hopes he’ll never have to use the unlimited authority he has just received to bail out the mortgage giants. If he’s right, the cost to taxpayers will be zero.

But if Treasury does have to rescue Fannie and Freddie, it’s likely to cost far more than the current estimate of $25 billion – even well beyond the $100 billion worst-case-estimate from the Congressional Budget Office.

Fannie and Freddie, which have charters with the government, are instrumental to the mortgage process since they provide funding to banks by purchasing pools of home loans and packaging them as securities.

Shares of the two companies have each plunged about 50% in the past month, raising fears about whether they have enough capital to deal with losses brought on by further declines in home prices.

But even if just one of the firms needs to turn to Treasury to borrow money or sell stock in order to raise more capital, the market reaction could be swift. And it would likely start both firms down an inevitable road to a government takeover.

“If one goes down it’s likely to so spook the market that it will bring the other one down as well,” said Jaret Seiberg, financial analyst for the Stanford Group, a research firm.

If that were to occur, taxpayers will be on the hook for huge losses on the $5 trillion in mortgage-backed securities the two firms either own or guarantee. So the cost of a government rescue of Fannie and Freddie is almost certain to soar well beyond last week’s official $25 billion cost estimate.

The CBO came up with its estimate based on the likelihood of different scenarios. The CBO said it believed there was a better than 50% chance that no rescue would be needed. Thus, it wouldn’t cost taxpayers anything.

However, the CBO also said there was about a 5% chance of a rescue that would cost taxpayers “more than $100 billion” because of the need to cover losses at the firms.

Some experts believe the probability of a full-blown takeover is much higher than the CBO’s 5% estimate.

Dan Seiver, a finance professor at San Diego State, said he thinks Fannie and Freddie will run into more financial problems “because the housing market hasn’t bottomed out yet.”

As a result, he believes “their essential independence from the federal government will disappear and they’ll become government entities.”

Just how much assistance, if any, Fannie and Freddie may ultimately need could come into clearer focus next month after the two firms report their latest financial results.

Fannie hasn’t announced a date for its second-quarter report yet but Freddie will release its second quarter results on Aug. 6.

The two companies have lost a combined $12 billion during the past three quarters, mainly due to write-downs in the value of their combined $1.5 trillion portfolio of mortgage backed securities.

Analysts expect losses for both firms to continue through this year, according to Thomson Reuters. And some analysts believe second quarter losses for Fannie and Freddie could top the losses from the first quarter.

Victoria Wagner, the chief credit analyst for the firms at credit rating agency Standard & Poor’s, said Fannie and Freddie are likely to post record losses from defaults and foreclosures on mortgages they own or guarantee.

S&P put Fannie and Freddie on credit watch last week, meaning it is considering whether to downgrade their debt. Still, Wagner said it’s too soon to predict whether Fannie or Freddie will need a bailout.

“Our belief is still they should be able to manage through the cycle,” she said.

Spokespeople for Fannie and Freddie wouldn’t answer questions about whether they could get direct government help and still stay independent.

“We do not believe this will ever happen, so we’re not going to speculate if this did happen, what the next step might be,” said Freddie spokeswoman Sharon McHale.

Treasury Department spokeswoman Jennifer Zuccarelli also did not want to speculate about whether the government would have to take over the firms should direct help from Treasury become necessary.

She did reiterate, however, that the Treasury Department “is interested in keeping Fannie and Freddie in their current shareholder-owned form.”