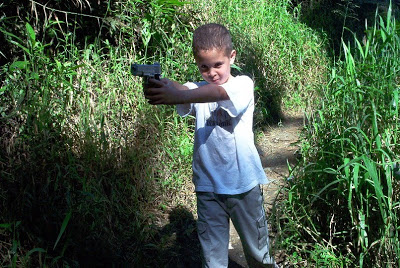 “Playing with Guns.” Photo from Mikesjournal.
The fear stimulus:
Year of the Bullet 2009

As one hand of history played high keys of hope and change during the inaugural days of 2009, the other hand was reaching for more ominous sound. Across the keyboard of our national concerto, some chimed celebration, others hoarded bullets.

Reporter Harry Pierson Curtis of the Orlando Sentinel wrote about the 2009 stampede for small arms and ammo in early February: “Most in demand is handgun ammunition, including 9 mm and .45-caliber for semiautomatic pistols and .38-caliber for revolvers.” Customers, retailers, manufacturers, and interest groups all had something to say. The usual American demand for 7 billion rounds of ammo per year (23 bullets per capita?) was fixin’ to head North.

“The Ammo Boom is No Dud,” declared ESPNOutdoors.com in late March. Special contributor Colin Moore attributed the “irrational” hoarding frenzy to a “fear factor” caused by the Democratic Party landslide. Handgun owners, especially, were worried that their ammo would soon be taxed into extinction. One Winchester bullet factory was said to be working 24/7 to meet the hyped-up demand.

By Labor Day, the Los Angeles Gun Club had imposed a four-box limit on ammo sales per customer per visit, reported L.A. Times writer W. J. Hennigan. Bullet manufacturers were running “full bore.” Even the military was outsourcing contracts to fill its need for 1.6 billion rounds per year.

Quarterly excise-tax figures posted November 2 by Ted Novin for the National Shooting Sports Foundation (NSSF) confirmed that the gun and ammo sector of the national economy was pumped up. Tax reports for the second-quarter of 2009, compared to the second quarter of 2008, were “up 44.4 percent for handguns, 51.3 percent for long guns, and 57.5 percent for ammunition.” Since the tax rate had not been raised, the increasing tax amounts could be roughly equated to rising sales. Gross Domestic Product meanwhile had fallen over the same two quarters, year over year. For bullet makers, fear of Obama Democrats turned out to be a stealth stimulus.

On the export front, USA ammo manufacturers also logged record sales to global customers. According to a Census Bureau database, exports of small arms ammunition through the first ten months of 2009 have exceeded $2 billion compared to $2.17 billion for all twelve months of 2008.

In 2008, the $Two-Hundred-Million Club was curiously occupied by The Netherlands, which has only booked about $17 million in ammunition receivables through October 2009. Israel in all of 2008 had purchased $184 million in American-made ammo supplies. So far in 2009, small arms ammo sales to Israel are up 69 percent.

As an item in the 2009 national account, small arms ammo has been good for GDP and for the balance of trade. Although imports of small-arms ammo are up slightly, edging toward $800 million for the year, American bullet makers are likely to end the year by maintaining something close to a three-to-one trade advantage over their foreign competitors. When it comes to guns and ammo, America knows her stuff. 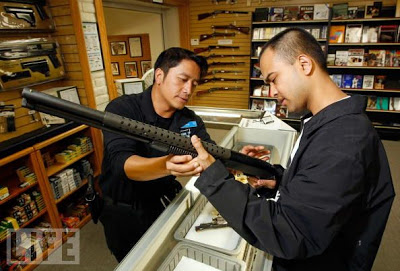 Shopping for guns in Las Vegas. Photo by Ethan Miller / Getty Images / Life.
According to Google Trends, the “ammunition” search term has leveled out to normal since its Second Quarter spike, although its value to the news industry seems to be steadily growing these past few years. Salt Lake City ranks first for taking interest in the term, followed by Phoenix, Denver, St. Louis, Houston, Dallas, Portland, Tampa, Austin, and Orlando (three cities in Texas, two in Florida, nothing on the East Coast North of Florida or the West Coast South of Portland). If you don’t shop for bullets, you might be interested to read what “ammunition” looks like under Google shopping. Kubrick fans should check out the Winchester Full Metal Jacket Value Pack.

Political theorist Hanes Walton, Jr. developed the concept of the “political context variable” to analyze what happened to history between 1965 and 1995. In the Year of the Bullet 2009 we find hard-core evidence of a singular economic countertrend that defies deindustrialization and depression. If political contexts have a material basis, then we have something material to consider about the political context of the first Obama year.

For every claim that the Obama landslide transformed American culture in 2009 we have “bullet points” that document a grassroots prairie fire of gut fear. If progressive activists have felt tiredness in their bones, it may have something to do with a visceral recognition that fear is what we are fighting but never get the chance to confront.

“Contextual transformation in the political arena is a multi-phased process,” argues Walton, Jr. “First, a desire to transform the political context must be evident, along with a strategy. Second, that desire and strategy must become institutionalized.” What progressives generally want is a different kind of fearlessness than the kind you buy with bullets. Yet the strategy of confronting bullets is not quite the strategy of confronting the fear that organizes the production and distribution of bullets. There will not be an end to the boom in bullets until the fear itself is busted.

In parts of Obama’s agenda there seems to be a spark of fearlessness. Health care security would supplement social security as a means of reducing the daily experience of fear. But Obama is also from the Jane Addams school of social progress, which means he’s not going to make a step forward today that people didn’t first demand yesterday. In 2009, people’s fear of health care insecurity got mowed over by louder fears. How do we strategize and institutionalize a truly disarming fearlessness? In the progressive activism of our post-9/11 world, every time we turn around another fear come smashing up.

Organizers of the upcoming SHOT Show in Las Vegas (Jan. 19-22) report that interest is up for “the world’s premier exposition of combined firearms, ammunition, archery, cutlery, outdoor apparel, optics, camping and related products and services.” If you go to Vegas for the SHOT Show, make sure you are a member of the industry (or media) and don’t forget that “personal firearms or ammunition are not allowed.” You don’t see industry attorneys challenging the Second Amendment infringements of that rule. In the end, even the purveyors of guns and ammo would rather push that fear out their door.