Feminism and the Wronged Wife 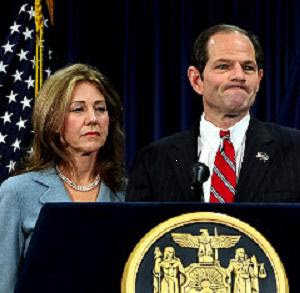 Just once, I’d like to see a politician caught with his pants down (so to speak) not trot out his wronged wife to stand beside him as he issues his mea culpa. I’d like to have been spared the spectacle of watching New York Gov. Eliot Spitzer announce that he had strayed from his own standards without wife Silda at his side.

Or if we have to see the wife, couldn’t it be as she is throwing his suits, socks and golf clubs on the sidewalk while invoking the name of a ruthless divorce attorney?

I should think that behind the scenes, there has been sobbing, screaming and recriminations – all well deserved. Yet for reasons beyond my ken, the political wife must show the public that she can bury what any cheated-on wife must feel. She must act as if she is unfazed by personal betrayal.

If his apparent ties with a prostitution ring really were a “private matter,” as Spitzer claimed Monday, then couldn’t he have left his wife to deal with the news in private? Instead, the Democrat followed the lead of GOP Sens. Larry Craig and David Vitter – and former Democratic New Jersey Gov. James McGreevey – and subjected his wife to an extra helping of gruel on a public podium.

I guess the point of the exercise is to show voters that Spitzer is not such a creep that his wife won’t stand by him. Problem is, by dragging his wife before the public, Client-9 shows himself to be an even bigger creep.

The Emperors Club VIP. Ha. The escort service’s name says it all. Deep down, the reformer didn’t want to be the Sheriff of Wall Street – he wanted to be Nero.

For her part, Silda Spitzer exhibited the good sense not to put a happy face on her situation. She looked completely shocked. She has her own future and three daughters to consider -and deserves the time and space needed to decide where she wants to go from here, and whether her marriage is worth saving.

As a role model for girls, I hope she will think about what feminism has wrought. There was a time in America when husbands cheated on wives and wives stayed with their husbands because they were economically bound to them. Feminism, and the career track it spawned, was supposed to liberate women from unequal marriages. Clearly, it hasn’t.

Spitzer is a Harvard Law School graduate, who once worked as a corporate lawyer for Skadden, Arps, Slate, Meagher & Flom. She likely has never earned the hourly rate an Emperors Club charges for its escorts’ services.

Hillary Clinton is a Yale law school graduate and former corporate lawyer, who like Tammy Wynette chose to stand by her man after he very publicly and repeatedly stepped out on her.

What’s the point? Are these women tigers in the board room who settle for leftovers at home? Did they become high-achievers in their careers only to allow themselves to become support staff in their own marriages?

Former Democratic presidential running mate Geraldine Ferraro has been taking heat this week for telling the Los Angeles Daily Breeze that if Barack Obama “was a white man, he would not be in this position. And if he was a woman (of any color) he would not be in this position. He happens to be very lucky to be who he is.” Camp Obama called Ferraro’s remarks “divisive.”

Look at it from another angle. Hillary Clinton is lucky she is not a white man, or man of any color.

As the cigarette ad used to say: You’ve come a long way, baby. Look at the cream of the crop of my generation’s feminists. They fought hard to win workplace equality with men, and in many corners, women have achieved parity or come close to parity.

Sort of. Look at today’s political marriages among this first wave of widespread American feminism, and you see that in some marriages women are equal to men, but their men will always be dogs.