Fighting Against Disenfranchisement in Michigan 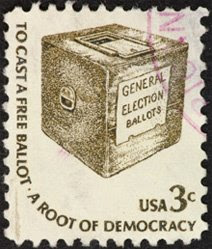 The ACLU and a national student group have sued Michigan Secretary of State Terri Lynn Land to halt two statewide voter purging programs that they say could disenfranchise hundreds of thousands of state voters before the November presidential election.

“We have repeatedly advised Secretary Land’s office that these voter purge programs are unlawful, yet they have refused to bring their practices into compliance,” said Bradley Heard, senior attorney with the Advancement Project, which joined the ACLU in the lawsuit.

The suit was filed Wednesday in U.S. District Court in Detroit. No hearings have been set on the suit which requests a preliminary injunction to halt the programs.

There was no immediate comment from the Secretary of State’s Office.

But based on press reports, she said “it appears these groups are challenging laws that have been on the books since 1975.”

One of them the Michigan’s Motor Voter law, served as a model for the National Voter Registration Act of 1993, which the ACLU cited in the suit, she said.

The groups say one program immediately cancels the registrations of voters who obtain driver licenses in other states instead of issuing confirmation notices and following procedures required by the National Voter Registration Act of 1993. The suit said that program removes an estimated 180,000 voters annually.

A second program requires local clerks to nullify the registrations of newly registered voters when their original voter identifications cards are returned as undeliverable by postal authorities. The groups said Detroit elections officials remove about 30,000 voters annually through the program.

“The state of Michigan is breaking the law,” said Meredith Bell-Platts, staff counsel with the ACLU Voting Rights Project. “With the election just weeks away, the effect of these undemocratic purges could make all the difference in deciding who becomes our next president.”

The other plaintiff in the suit is the United States Student Association. Defendants are state elections director Christopher Thomas and Ypsilanti City Clerk Frances McMullan.

The suit was assigned to U.S. District Judge Stephen Murphy.

This entry was posted in RagBlog and tagged Electoral politics, Voter Registration. Bookmark the permalink.

1 Response to Fighting Against Disenfranchisement in Michigan