US Recycling Is Poisoning the Rest of the World 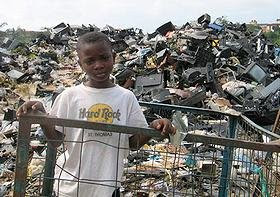 This boy was scavenging on a pile of broken electronics at the Alaba market, Lagos, Nigeria. 2006. (Photo © Basel Action Network)
EPA Faulted for Failing to Control E-Waste Exports
September 19, 2008

WASHINGTON, DC — U.S. hazardous waste regulations have not stopped exports of toxic used electronics to developing countries, partly because they are not being enforced by the U.S. Environmental Protection Agency, finds a new report issued Wednesday by the investigative branch of Congress.

In the report commissioned by the House Committee on Foreign Affairs, the Government Accountability Office says that in addition to the EPA’s poor enforcement performance, the regulations themselves are too limited to deal with the problem.

The rules address only one type of electronics – the old-fashioned rectangular type of monitors called cathode ray tubes. CRTs are particularly harmful because they can contain as much as four pounds of lead, a known toxin.

But exports of other used electronics flow virtually unrestricted, even to countries where unsafe recycling practices can cause health and environmental problems. This happens, the GAO reports, because the existing hazardous waste regulations assess only how products will react in unlined U.S. landfills.

While more Americans are recycling old computers and more companies are taking them back for recycling, there is a “tsunami of CRTs coming that will end up in developing countries contaminating their land and waters,” said Jim Puckett of the nonprofit Basel Action Network, who first documented computer breaking in China in 2001.

“Thousands of laborers, former farmers were making $1 a day smashing, melting, cooking our old computers,” Puckett told reporters on a teleconference call about the GAO report on Wednesday.

“Whole villages were making their living burning little wires, cooking computer chips, beathing toxic fumes,” he said. “Vats of chips were soaked in acid to extract the gold and all the residues were flushed into the river.” 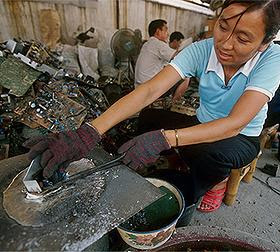 When he returned to the same area last year, Puckett said the scene had expanded with many more workers breaking many more electronic devices.

He says that some of the lead recovered from these scrapped computers is returned to the United States in the form of toys and jewelry that can poison kids.

“We are hopeful that the GAO report will help us achieve a full ban on exporting toxic electronic waste to developing countries,” he said. “Then we can starting taking back and doing recycling.”

Federal legislation is needed, said Puckett, because the current patchwork of state laws and regulations is not effective, and under the Constitution states cannot regulate foreign trade. “They must punt on that and now they’re punting into a black hole,” he told reporters.

The average useful life of a computer is about two years. Americans dispose of at least 50 million computers a year or 3,000 tons each day, and millions more are stored in homes and corporate warehouses awaiting disposal. Each computer contains toxics such as lead, cadmium and mercury, which if disposed of improperly can harm people and the environment. 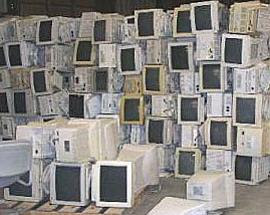 In January 2007, the EPA began regulating the export of CRTs under a rule that requires companies to notify the agency before exporting CRTs.

But companies easily circumvent this rule, GAO investigators found when they posed as foreign buyers of broken CRTs in Hong Kong, India and Pakistan, among other countries.

They identified 43 U.S. companies that expressed willingness to export these items. “Some of the companies, including ones that publicly tout their exemplary environmental practices, were willing to export CRTs in apparent violation of the CRT rule,” the report states.

Recent surveys made on behalf of the United Nations found that used electronics exported from the United States to many Asian countries are dismantled under unsafe conditions, using methods like open-air incineration and acid baths to extract metals such as copper and gold.

GAO observed thousands of requests for these items on e-commerce websites during a three month period, mostly from Asian countries such as China and India, but also from some in Africa.

“Some exported used electronics are handled responsibly in countries with effective regulatory controls and by companies with advanced technologies, but a substantial quantity ends up in countries where disposal practices are unsafe to workers and dangerous to the environment,” the GAO report states.

EPA officials acknowledged compliance problems with its CRT rule but said that because the rule is new, their focus was on educating the regulated community.

The GAO called this reasoning “misplaced” because investigators found so many exporters willing to engage in apparent violations of the CRT rule, even some who are aware of the rule.

The report faults the EPA for not assessing the extent of noncompliance. EPA officials told investigators they have neither plans nor a timetable to develop an enforcement program.

The GAO says hazardous waste regulations should be enforced and also expanded to include computers, printers, and cell phones.

To help make U.S. export controls more consistent with those of other industrialized countries, the GAO recommends that the United States ratify the Basel Convention, an international treaty governing the import and export of hazardous wastes.

Customs and other agencies need to improve identification and tracking of exported used electronics, the GAO recommends.

Congressman Gene Green, a Texas Democrat who chairs the House Subcommittee on the Environment and Hazardous Materials, told reporters on the teleconference that he considers the current EPA administration intransigent.

“The EPA is not as interested in doing what statutorily they should be on this and lots of other issues,” he said.

After the elections in November, said Green, “Whatever happens, we’re going to get ourselves a new EPA administrator.”

Congressman Mike Thompson, a California Democrat and founding member of the congressional E-Waste Working Group in 2005, said that when Congress reconvenes after the elections, “We’ll give a resonable time for a reconstituted working group to put something together, but if nothing emerges, then we’ll have to start from scratch.”