FILM : Bush Gets Stoned in ‘W’

‘Oliver Stone orchestrates the chaos effectively, and he is immeasurably aided by the stalwart presence of Josh Brolin, who nails his outstanding performance of Bush.’
By Wajahat Ali / October 17, 2008

Oliver Stone’s fascinating and entertaining portrait of “W.” depicts George W. Bush as the prodigal son whose desire for paternal validation breeds a paralyzing insecurity that simultaneously drives and suffocates his ambitions.

Stone and company at times veer dangerously close to parody in their depiction of the Magnificent 7 [Bush, Rumsfeld, Cheney, Rice, Rove, Powell and Tenent]: the camaraderie of Bush cronies responsible for the disastrous decision to attack Iraq. However, as we reflect now at the audacious and flabbergasting foreign policy blunders of the post 9-11 Administration, perhaps a Monty Python-esque satirical touch would be the ideal vehicle to fully dilute and appreciate the madness of it all.

Regardless, the movie is structurally anchored by a straightforward – at times overly verbose and familiar – depiction of the buildup to the Iraq War punctuated by a series of quick, erratic flashback vignettes chronicling the rise of the improbable Shrub. Through this narrative, Stone thematically implies that Bush Junior’s entire life until his Presidency was a series of aborted enterprises representative of a well intentioned but aimless man prone to impetuousness and heedlessness. However, this chaotic narrative could also reflect the rushed, streamlined film schedule, which was shot only a few months ago, and aggressively completed for a pre-election release date.

Despite the film’s budget and schedule restraints, Stone orchestrates the chaos effectively, and he is immeasurably aided by the stalwart presence of Josh Brolin, who nails his outstanding performance of Bush. Brolin portrays him as a well intentioned, charismatic, impulsive “gut player.” He is a man whose quest for greatness eventually transforms him into an ultimately semi-sympathetic yet tragically clueless figure who neither achieves self-realization nor personal fulfillment. 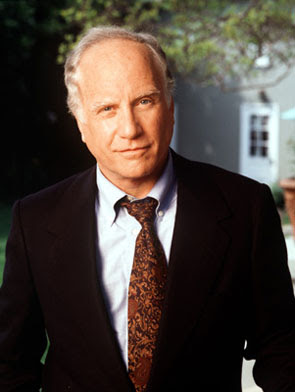 Richard Dreyfuss is ‘frightening and compelling’ as Dick Cheney in ‘W’.
Plaudits should also be heralded for Richard Dreyfuss’ frightening and compelling turn as Vice President Cheney, a man who strategically uses restraint to maximize the promotion and effectiveness of his foreign policy ideology: “Drain the Swamp” that is the Middle Eastern oil reserves and secure longevity for the American Empire. He emerges as both a manipulative Iago and Emperor Palpantine; a puppeteer who whispers and insinuates the necessity to implement harsh interrogation (“torture”) for sake of homeland security and a “War on Terror” to pacify the Middle East for future American economic interests.

After a blistering back and forth debate amongst the administration about invading Iraq, Bush – who was quietly absorbing the rhetoric – simplifies the complex policy into an easily digestible ideological battle between “good vs. evil” and “us vs. them.” Stone repeatedly highlights Bush’s sincere – if deluded – conviction that his actions are predicated upon ushering “freedom” to a starving population hungry for “democracy.” Throughout the movie, Bush is shown to crystallize nuances and complicated issues into a “Joe 6 Pack” narrative; one that is intensely influenced by his very sincere and passionate “Born Again” Christian beliefs. “God wants me to run for president,” says Brolin’s Bush to his Evangelical Reverend, comparing his ineloquence yet steadfast conviction to that of a persevering Moses carrying out God’s “Divine Plan.” Stone’s depiction is all the more frightening and comical due to its truth as evidenced by the countless articles, interviews and biographies that have painted a similar portrait.

As a counterweight, Colin Powell played with simmering anger and moral indignation by Jeffrey Wright, emerges as one of the movie’s sole voice of wisdom and conscience. The cocky, self-assured Rumsfeld, played by Scott Glen, and assertive Cheney, repeatedly rebuke his pointed critiques at the “Bush Doctrine” and requests for explanations for the pre-emptive strike. Naturally, Stone takes liberties with the dialogue, however Powell’s early resignation and subsequent comments elucidate a ring of truth to his depiction as “the odd man out.” Sadly, Stone and actress Thandie Newton make Condi Rice into a perky, cheerleader caricature. Although the makeup and wardrobe is impeccable, Newton simply mimics Rice, which hardly reflects the reality of her influential involvement.

Aside from Dubya, the central, supporting figure is “Poppy” Bush, the dynasty’s patriarch played exceptionally by veteran character actor James Cromwell. As his thematic foil, “Poppy” Bush represents everything “Junior” is not: a varsity, Yale baseball player, a prosperous businessman, and a respected and savvy politician. The movie’s most fascinating and illuminating aspects evolve from Stone’s psychoanalysis of Dubya as the shameful ne’er do well overshadowed by the towering legacy and failures of his ubiquitous father. Furthermore, Bush Sr.’s juxtaposition of “Junior” to his more intellectual and successful brother Jeb, who is wisely alluded to but rarely shown in the movie, creates another immeasurable adversarial shadow that “Dubya” can never wrestle. The heir apparent, Jeb, loses his rightful, Presidential Bush crown to Mordred, the unwanted, black sheep exemplified by Dubya and his lifetime of screw ups, alcoholism, failed businesses and insecurity complex.

“You think you’re a Kennedy? You’re a Bush! Act like one,” commands elder Bush to his wayward son in 1971 after Dubya’s string of failed enterprises at an investment firm, oilrig, ranch, and the air guard. As with most “Daddy didn’t love me” psychological narratives, the son’s entire existence is propelled simultaneously by a rebellion against anything resembling his father coupled with a painful yearning for his father’s unconditional acceptance. After Bush’s ’92 loss to Clinton, Stone portrays “Poppy” as tired, sentimental and old, weeping in Barbara’s bosom upon hearing his defeat. “Dubya” sees this as weakness and tells his supportive and patient wife [played well by Elizabeth Banks], “I will never let this happen to me!” blaming the loss on his father’s inability to finish the job [killing Saddam] in Desert Storm. After losing his Congressional bid, Dubya vows never to be “Out-Christian’d” and “Out-Texan’d” again, thus fueling his 2000 campaign image molded by Rove.

Throughout the movie, Bush’s motivations stem from endless attempts to one-up his father and prove that he can succeed without his influence and interference: he brags to advisors that he beat his father’s time when running the mile; he boasts he would find and kill Saddam unlike Poppy; and he rebukes Condi’s suggestion that he should consult the seasoned, elder Bush for advice on the Iraq War.

After a temporarily dull and familiar third act with overused images and rhetoric of Bush and the Iraq War [including reenactments of the “Mission Accomplished” speech and his Address to the Union], Stone re-engages his central psychoanalytic theme with an Oval Office dream sequence. Upon realizing the war effort is faltering and that WMD’s are nonexistent, an exhausted Bush dreams of encountering an aggressive and condescending Bush Sr. in the Oval Office. “Poppy” takes the gloves off and challenges Dubya to a “mano – a -mano” fight once and for all proving who’s the man. As with most events in his life, Dubya fronts bravado but ultimately cowers with confusion and fear. The elder Bush looks at him disdainfully and says that Junior’s entire life has been a “fiasco.”

In fact, the movie begins and ends with another symbolic dream sequence in which Dubya imagines himself in an empty, beautiful baseball field on a glorious afternoon. He hears the announcer bellowing from the speakers, the excited murmurs of the animated crowd; he hears the crack of the bat, and he runs to the bleachers making a stunning catch. At first, it doesn’t bother him that’s he’s all alone and simply playing make believe. At the end, we revisit the baseball dream and witness a similar scenario as Bush races to the outfield to make the catch. Only this time, Bush stares perplexedly at a darkened sky waiting for the ball that never drops.

Stone’s symbolism highlights the pathetic sadness of a man who was comically and fortuitously allowed to suit up as a slugger and play in the majors. A man motivated by a paralyzing obsession for vindication ultimately standing alone in the outfield without realizing his moment of greatness has passed him by and was perhaps never meant for him in the first place.

[Wajahat Ali is a Muslim American of Pakistani descent. He is a playwright, essayist, humorist, and Attorney at Law, whose work, “The Domestic Crusaders” is the first major play about Muslim Americans living in a post 9-11 America. His blog is at http://goatmilk.wordpress.com/. He can be reached at wajahatmali@gmail.com]

1 Response to FILM : Bush Gets Stoned in ‘W’