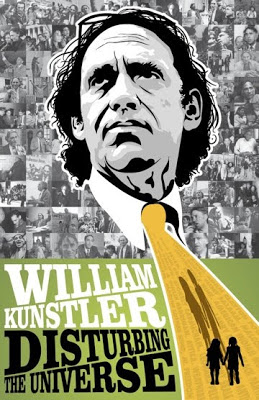 William Kunstler: Disturbing the Universe, a film by Emily Kunstler and Sarah Kunstler, premiered as part of the Austin Film Festival Wednesday, Ocober 27. The film, which was also selected for the 2009 Sundance Film Festival, has it’s public premiere in New York, November 13-15.

The ninety-minute documentary is the story of a larger than life attorney — a man who left his Westchester suburban home, his wife and his children for a journey to the south of Jim Crow and lunch-counter sit-ins. He never returned to the comfortable suburbs.

Along with Leonard Weinglass, Kunstler was defense counsel for the Chicago Seven conspiracy trial. The eighth defendant, Bobby Seale, was bound and gagged in the courtroom for demanding to speak in his own defense. Kunstler was sentenced to 40 months for contempt by Judge Julius Hoffman. Out on bail and fighting appellate battles, he waded into negotiations at the Attica Prison uprising.

He stood outside the gates listening to the gunshots as 31 inmates and nine guards were killed by police fire. He was counsel for the Catonsville Nine, Catholics who burned draft records with homemade napalm. He traveled to Wounded Knee to defend the American Indian Movement.

These legendary legal battles are documented with remarkable footage and interviews with many of the principals, including Bobby Seale, Tom Hayden, Nancy Kurshan, Dennis Banks, an Attica guard and many of Kunstler’s colleagues. But, it is the tender family scenes with his second wife and young daughters (the filmmakers) that add depth and subtlety to this portrait.

As young girls, Emily and Sarah Kunstler were raised to admire their legendary father. But Kunstler’s later years took him into high profile criminal defense of clients accused of gang rape, cop killing and the assassination of a Jewish Defense League leader. These cases brought angry protests to the daughters’ front door. In many ways the film is the effort to reconcile the legend with the man, the lawyer with the father, the civil rights defender with the attorney for murderers.

This is a film about the uprising of the 60s and 70s told from the perspective of a generation that had to live with a larger than life luminary of those times. 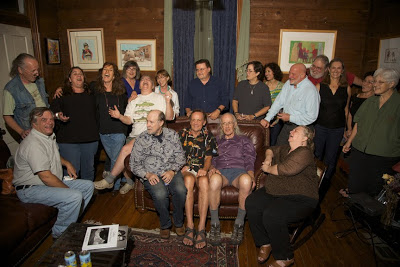 Members and friends of the 12th Street Law Collective in Austin held a reunion Oct. 4, 2009. On sofa, left to right, are Jim Simons, Brady Coleman and Cam Cunningham. On chair to their right is Bobby Nelson. John Howard is deceased. Photo by Alan Pogue / The Rag blog.
The film underscores the critical role that attorneys played in the uprisings of those times. On October 4th in Austin, there was a reunion for a law office that took on its local share of 60’s and 70’s defendants. The 12th Street Law Collective principals were Jim Simons, Cam Cunningham, Brady Coleman, Bobby Nelson and John Howard.

Jim was a co-counsel at the Wounded Knee takeover and defender of GI antiwar activists in Killeen. Cam and Brady defended the Gainesville Eight, Vietnam Veterans Against the War accused of conspiracy. Bobby blazed legal trails for women barred from employment as bus drivers, emergency medical technicians, and telephone cable splicers. She took UT to court for sex discrimination and was an early defender of the rights of gays and lesbians.

Those of us who were clients during those years owe a deep debt of gratitude to the attorneys. Their legal fees were often cobbled together through benefits or not at all. Like Kunstler, they used their skills and gave their hearts for the cause.

[Alice Embree, a long-time Austin political activist and writer, was a leader in the Sixties New Left and women’s liberation movements and was a founder of Austin’s The Rag and New York’s Rat, trailblazers in the Sixties underground press.]