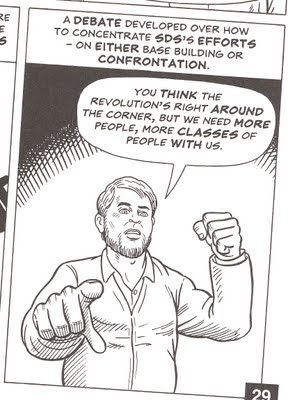 Image from Students for a Democratic Society: A Graphic History.
Today’s Red Book and the demise of SDS

Nobody present had repudiated Leftism, but everyone seemed to have reached a consensus that the heedlessness of youth had been our common flaw.

A few years ago, the Southern Student Organizing Committee, a white-folks group chartered by SNCC (Student Nonviolent Coordinating Committee), held a reunion in Nashville. SSOC was integrationist and anti-war, but generally speaking, less flamboyant than the Students for a Democratic Society (SDS).

Because I had been on its staff for a semester, and because old friends urged me, I attended the reunion. Its most-awaited speaker was Gregg Michel, a professor at UTSA, younger than all of the veterans, who had authored a manuscript on SSOC’s history, now available as a book, The Struggle for a Better South. Conference organizers assigned to him the topic that everyone else dreaded to take: the downfall of SSOC.

Michel spoke at a workshop which about 40 of us attended. In unsmiling terms he blamed SSOC’s demise on the Progressive Labor Party, or PL — then a Maoist outfit — and October League, OL, a Maoist party founded by Mike Klonsky, once a leader of the Revolutionary Youth Movement, or RYM faction of SDS. PL had introduced a resolution at a March 1969 national conference of SDS in Austin, calling for breaking fraternal ties with SSOC. The OL, for reasons of its own, later that year persuaded its leaders to disband.

A few SSOC figures had aided in the dissolution, two of whom were present in the room: me, one of the signers of the PL-SDS resolution, and an Atlanta comrade who, on orders from the OL, had burned SSOC’s records. Michel thought we and our ideological comrades were villains, and had written his final chapter in that vein.

Once he recapitulated SSOC’s demise, fearlessly castigating its liquidators, his audience drew its breath. Somebody raised a hand and in a tentative voice said, “Dr. Michel, I think there’s something you don’t understand. You see, in one way or another, we were all crazy in those days!” Laughter followed. Nobody present had repudiated Leftism, but everyone seemed to have reached a consensus that the heedlessness of youth had been our common flaw.

SSOC button, 1965. Use of the Confederate flag led to controversy.

In reading recent histories of SDS, with the possible exception of Mark Rudd’s memoir, I have not detected that same let-bygones-be-bygones approach. I last encountered you-guys-were-to-blame bitterness in Students for a Democratic Society: A Graphic History, in which at least three contributors to The Rag Blog had a hand. Their book was apparently compiled to tell members of the new SDS what the organization’s heritage might be.

A Graphic History lays the blame for the August 1969 collapse of SDS at the feet of both PL and the RYM. The book’s heroes are those upon whom it bestows the title “SDS Regulars,” a formerly unnamed group which for awhile kept on keeping on, even after the final SDS convention, held in Chicago. Several prior books took a similar view, and it’s apparently catechism in the SDS of today.

I haven’t given much thought to SDS for several years. But lately I’ve been reading about Depression-era Leftism in the South, and some explanatory ideas have come to mind.

One of them is that in times of upsurge, left-wing factions tend to merge instead of split. Communists gave up their independent unions and joined the CIO when it started rising to its feet, and in turn, the CIO hired red organizers. The Communist and Socialist parties and even a couple of Trotskyist front groups for the unemployed merged when the New Deal christened its job-creation programs, whose employees they brought into a single unionish group, the Workers Alliance.

But when war preparations began restoring the American economy in 1939-40, membership in the Workers Alliance dropped — and the Socialists and Communist quarreled to its bitter end. When the CIO lost ground to an anti-labor crusade that followed World War II, it started purging its reds, a factional or sectarian move, even if the offending sect was labor’s mainstream.

In reading Southern history, I have also noted that groups that don’t accomplish their ends soon wither. Committees to free the Scottsboro Boys, initially formed by the Communist Party and the NAACP as rivals, even after agreements to cooperate, became moribund when the accused weren’t set free. Several anti-lynching groups surged during the ‘30s, only to collapse by the decade’s end because they couldn’t get Congress to pass an anti-lynching law.

The Southern Negro Youth Congress pioneered the struggle to dismantle Jim Crow, but its victories were few, and in the end, it was eclipsed by the patriotic fervor of World War II. No organization is given an open-ended lease on life, and if it doesn’t win, it fades, even when sheltered from the blazing sun of factional hatred.

SDS by early 1969 faced several problems, the chief of which was that it wasn’t ending the war in Vietnam. In less than five years, with teach-ins, demonstrations, and draft resistance, it had developed a wide following. In the process it also produced — an experienced leadership!

Early on, SDS leaders had seen that politely asking the nation’s rulers to end the war, by petitioning, for example, would not bring peace. Some of them raised the Frederick Douglas slogan, “Power concedes nothing without a demand!” — but that only underlined their initial innocence: even with Abolition, it had taken a demand — and a civil war. By 1969, most SDS honchos were convinced that keeping on, keeping on, wouldn’t bring results. Concluding that American democracy was a sham, many, and maybe most of them, began to toy with the idea of revolution.

Of course, they could have maintained a big movement by bringing naive freshmen and high-schoolers into new rounds of demonstrations, but perhaps they were too honest to do a thing like that: what’s the point, if it doesn’t accomplish the goal? Even today, how many of us can believe that we would have ended the war had we merely kept on as before?

In the event, something else happened. In November, 1969 the federal government instituted the draft lottery. Its first drawing was held on Dec. 1. Within a day, the anti-war movement lost thousands, perhaps hundreds of thousands of supporters, those whose numbers had not been called, their parents and girlfriends. From December 2 forward, SDS faced a tougher task, even at keeping on, keeping on. Like the Scottsboro and anti-lynching committees or the Southern Negro Youth Congress, it was not accomplishing its goal, and its base was sliding away, just as Workers Alliance members did when the Depression economy improved. 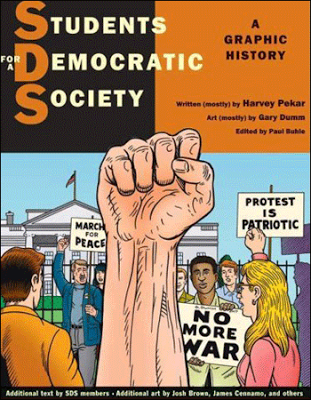 The downturn in activity that A Graphic History notes as the SDS split approached — which it blames on PL and RYM- — was no doubt owed in part to faction-fighting. But its deeper impetus was probably talk of the lottery draft and the lack of headway towards any peace.

A Graphic History lauds the Keeping On faction, but as I read the record, the war did not end because of their stick-to-it-ness, even despite the record numbers at demonstrations to protest the invasion of Cambodia. Perseverance, sometimes a virtue, can also be a symptom of insincerity or cluelessness.

When I look back on the history of the Dixie Left, it does not concern me that the Southern Tenant Farmers Union was Socialist and the Sharecroppers Union was Communist, nor do I feel afflicted because groups like these did not merge and live happily ever after. What I see in the pages of history is that people who built the Depression-era movements were our forerunners. We might today differ with much of what they advocated, but in their time and in our common place, they were what I would hope we would have been. They were defeated, as we were, because in politics, insurgent movements do not always survive, or win.

I do not think that losing is always attributable to lack of, or betrayal of, the “correct line,” “The Great Helmsman” or anything or anybody of the kind. Failure is not something for which its participants can always be blamed. Were people or factions whom we could name chiefly responsible for the multitudinous setbacks of the Left, we could hope to learn from their errors, and to rebuild a mass Left — tomorrow!

I suppose that those veterans and scholars of SDS who think we still stand a chance of leading the nation will probably continue laying blame; A Graphic History was published last year. And if none of those who admit that we were all crazy in those years is lucky enough to see the Revolution, I suppose it will be because we’ve given up Maoism even in its contemporary form. If we still believed, we’d take A Graphic History as our Red Book — and a few surviving “Regulars,” with the help of the new SDS, would erect grandiose marble statues on our graves.

[Dick J. Reavis — an award-winning journalist, educator and author — was active with SDS and the New Left in the Sixties. He wrote for Austin’s underground newspaper The Rag, and later was a senior editor at Texas Monthly magazine. Dick Reavis’ book, The Ashes of Waco: An Investigation, about the siege and burning of the Branch Davidian compound, was published by Simon and Schuster and may be the definitive work on the subject.]

And find on Amazon. com:

13 Responses to Dick J. Reavis : SDS and the Great Divide