Foster Kids In Texas Get Lots of Meds 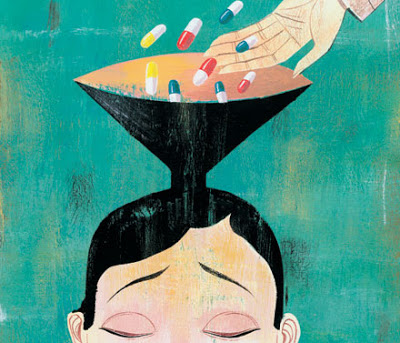 Copyright © Illustration by Olaf Hajek.
They get ‘three times the amount of psychotropic meds as their non-fostered Medicaid counterparts’
By Craig Malisow / August 4, 2008

As if they weren’t getting shafted enough, foster kids on Medicaid in Texas are receiving at least three times the amount of psychotropic meds as their non-fostered Medicaid counterparts – without any proven benefits.

This is according to a study led by Julie Zito, a professor of pharmacy and psychiatry at the University of Maryland-Baltimore, and published in the January issue of the journal Pediatrics.

The findings were based on the review of 32,135 Texas foster care kids enrolled in Medicaid between September 2003 and August 2004. More than 75 percent of the medications were used “off-label,” meaning not for their prescribed purposes.

“When two-thirds of foster care adolescents receive treatment for emotional and behavioral problems, far in excess of the proportion in non-foster care population, we should have assurances that the youth are benefiting from such treatment,” Zito testified in May, before a subcommittee of the U.S. House Ways and Means Committee.

2 Responses to Foster Kids In Texas Get Lots of Meds