FILM : The Sociology of Wealth in the USA 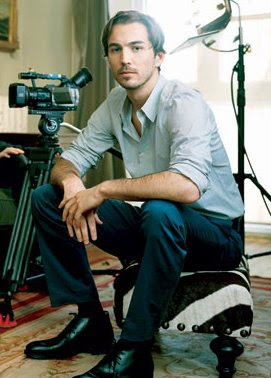 Johnson and Johnson heir and filmaker Jamie Johnson.
‘Johnson is obviously thoughtful and also disturbed by his view from the top of the class pyramid of American society’
By Roger Baker / The Rag Blog / August 4, 2008

Having no choice but the slim pickings at Blockbuster to rent a video for entertainment (San Antonio is apparently without a good classic and art video store like Vulcan Video in Austin), I carefully studied the small foreign and documentary section and lucked into two very good ones. First “Why We Fight” about Rumsfeld, Cheney and the military-industrial complex that inevitably pushes us toward war.

My other interestig choice was “Born Rich”, about the sociology of the kids of the ultra-wealthy in the USA. “Born Rich” was made by Johnson and Johnson heir Jamie Johnson, who got in trouble for revealing and discussing the existence of class in the USA . His video has not always flattering portraits of super-rich kids, to which he had unique access because of his own status as a wealthy heir.

“Born Rich” got a lot of exposure after it got picked up by HBO.

Johnson made a second video titled “The One Percent”, which is discussed
here.

Johnson is obviously thoughtful and also disturbed by his view from the top of the class pyramid of American society. The born-rich seem by and large to be average decent kids. But they are born into an exclusive insular class and culture in partial denial of their class status. It often considers discussing money tacky. It is logical that this should be the case, since the super-rich families usually hire the best top managers for increasing their wealth. There are certain things that it is impolite to know about or discuss, whether it is in the details of making the high possible profit or sausage.

Naturally the super-rich regard the latest crop of mere centa-millionaires as troublesome interlopers that get in the way of high society, as opposed to the old wealth and megawealth that make it into the Fortune 500. One pattern is that the super-rich tend by their nature to create exclusive self-perpetuating tribal, social institutions of denial. Blue blood social structures that prevent any feedback arising from the spreading discontent at the bottom from ever reaching and destabilizing or exerting influence at the top.

At least Jamie Johnson is willing to break the code of silence and let us see and try to understand the newest generation of the hereditary US ruling class up close, as the economic base of the pyramid of US wealth erodes. Will the hereditary super-rich in the USA react in similar ways to the British aristocracy, after Britain’s loss of economic power after WWI?

1 Response to FILM : The Sociology of Wealth in the USA