Frank Rich : Last Call for Change We Can Believe In 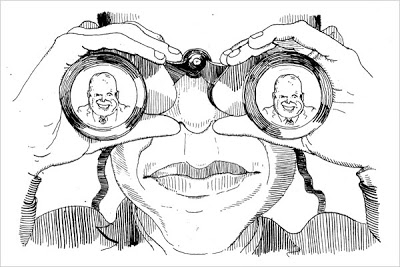 Drawing by Barry Blitt / NYT.
‘It’s time for Barack Obama to dispatch Change We Can Believe In to a dignified death’
By Frank Rich / August 24, 2008

AS the real campaign at last begins in Denver this week, this much is certain: It’s time for Barack Obama to dispatch “Change We Can Believe In” to a dignified death.

This isn’t because — OMG! — Obama’s narrow three- to four-percentage-point lead of recent weeks dropped to a statistically indistinguishable one- to three-point margin during his week of vacation. It’s because zero hour is here. As the presidential race finally gains the country’s full attention, the strategy that vanquished Hillary Clinton must be rebooted to take out John McCain.

“Change We Can Believe In” was brilliantly calculated for a Democratic familial brawl where every candidate was promising nearly identical change from George Bush. It branded Obama as the sole contender with the un-Beltway biography, credibility and political talent to link the promise of change to the nation’s onrushing generational turnover in all its cultural (and, yes, racial) manifestations. McCain should be a far easier mark than Clinton if Obama retools his act.

What we have learned this summer is this: McCain’s trigger-happy temperament and reactionary policies offer worse than no change. He is an unstable bridge back not just to Bush policies but to an increasingly distant 20th-century America that is still fighting Red China in Vietnam and the Soviet Union in the cold war. As the country tries to navigate the fast-moving changes of the 21st century, McCain would put America on hold.

What Obama also should have learned by now is that the press is not his friend. Of course, he gets more ink and airtime than McCain; he’s sexier news. But as George Mason University’s Center for Media and Public Affairs documented in its study of six weeks of TV news reports this summer, Obama’s coverage was 28 percent positive, 72 percent negative. (For McCain, the split was 43/57.) Even McCain’s most blatant confusions, memory lapses and outright lies still barely cause a ripple, whether he’s railing against a piece of pork he in fact voted for, as he did at the Saddleback Church pseudodebate last weekend, or falsifying crucial details of his marital history in his memoirs, as The Los Angeles Times uncovered in court records last month.

What should Obama do now? As premature panic floods through certain liberal precincts, there’s no shortage of advice: more meat to his economic plan, more passion in his stump delivery, less defensiveness in response to attacks and, as is now happening, sharper darts at a McCain lifestyle so extravagant that we are only beginning to learn where all the beer bullion is buried.

But Obama is never going to be a John Edwards-style populist barnburner. (Edwards wasn’t persuasive either, by the way.) Nor will wonkish laundry lists of policy details work any better for him than they did for Al Gore or Hillary Clinton. Obama has those details to spare, in any case, while McCain, who didn’t even include an education policy on his Web site during primary season, is still winging it. As David Leonhardt observes in his New York Times Magazine cover article on “Obamanomics” today, Obama’s real problem is not a lack of detail but his inability to sell policy with “an effective story.”

That story is there to be told, but it has to be a story that is more about America and the future and less about Obama and his past. After all these months, most Americans, for better or worse, know who Obama is. So much so that he seems to have fought off the relentless right-wing onslaught to demonize him as an elitist alien. Asked in last week’s New York Times/CBS News poll if each candidate shares their values, registered voters gave Obama and McCain an identical 63 percent. Asked if each candidate “cares about the needs and problems of people like yourself,” Obama beat McCain by 37 to 23 percent. Is the candidate “someone you can relate to”? Obama: 55 percent, McCain: 41. Even before McCain told Politico that he relies on the help to count up the houses he owns, he was the candidate seen as the out-of-step elitist.

So while Obama can continue to try to reassure resistant Clinton loyalists in Appalachia that he’s not a bogeyman from Madrassaland, he must also move on to the bigger picture for everyone else. He must rekindle the “fierce urgency of now” — but not, as he did in the primaries, merely to evoke uplifting echoes of the civil-rights struggle or the need for withdrawal from Iraq.

Most Americans, unlike the press, are not obsessed by race. (Those whites who are obsessed by race will not vote for Obama no matter what he or anyone else has to say about it.) And most Americans have turned their backs on the Iraq war, no matter how much McCain keeps bellowing about “victory.” The Bush White House is now poised to alight with the Iraqi government on a withdrawal timetable far closer to Obama’s 16 months than McCain’s vague promise of a 2013 endgame. As Gen. David Petraeus returns home, McCain increasingly resembles those mad Japanese soldiers who remained at war on remote Pacific islands years after Hiroshima.

Economic anxiety is the new terrorism. This is why the most relevant snapshot of voters’ concerns was not to be found at Saddleback Church but at the Olympics last Saturday. For all the political press’s hype, only some 5.5 million viewers tuned in to the Rev. Rick Warren’s show in Orange County, Calif. Roughly three-quarters of them were over 50 — in other words, the McCain base. By contrast, a diverse audience of 32 million Americans tuned in to Beijing that night to watch Michael Phelps win his eighth gold medal.

This was a rare feel-good moment for a depressed country. But the unsettling subtext of the Olympics has been as resonant for Americans as the Phelps triumph. You couldn’t watch NBC’s weeks of coverage without feeling bombarded by an ascendant China whose superior cache of gold medals and dazzling management of the Games became a proxy for its spectacular commercial and cultural prowess in the new century. Even before the Olympics began, a July CNN poll found that 70 percent of Americans fear China’s economic might — about as many as find America on the wrong track. Americans watching the Olympics could not escape the reality that China in particular and Asia in general will continue to outpace our country in growth while we remain mired in stagnancy and debt (much of it held by China).

How we dig out of this quagmire is the American story that Obama must tell. It is not a story of endless conflicts abroad but a potentially inspiring tale of serious economic, educational, energy and health-care mobilization at home. We don’t have the time or resources to go off on more quixotic military missions or to indulge in culture wars. (In China, they’re too busy exploiting scientific advances for competitive advantage to reopen settled debates about Darwin.) Americans must band together for change before the new century leaves us completely behind. The Obama campaign actually has plans, however imperfect or provisional, to set us on that path; the McCain campaign offers only disposable Band-Aids typified by the “drill now” mantra that even McCain says will only have a “psychological” effect on gas prices.

Even as it points to America’s future, the Obama campaign also has the duty to fill in its opponent’s past. McCain’s attacks on Obama have worked: in last week’s Los Angeles Times-Bloomberg poll, Obama’s favorable rating declined from 59 to 48 percent and his negative rating rose from 27 to 35. Yet McCain still has a lower positive rating (46 percent) and higher negative rating (38) than Obama. McCain is not nearly as popular among Americans, it turns out, as he is among his journalistic camp followers. Should voters actually get to know him, he has nowhere to go but down.

The argument against Obama’s “going negative” is that it undermines his message of “transcendent politics” and will make him look like an “angry black man.” But pacifistic politics is an oxymoron, and Obama is constitutionally incapable of coming off angrier than McCain. A few more fisticuffs from the former law professor (and many more from his running mate and other surrogates) can only help make him look less skinny (metaphorically if not literally). Obama should go after McCain’s supposedly biggest asset — experience — much as McCain went after Obama’s crowd-drawing celebrity.

It is, after all, not mere happenstance that so many conservative pundits — Rich Lowry, Peggy Noonan, Ramesh Ponnuru — have, to McCain’s irritation, proposed that he “patriotically” declare in advance that he will selflessly serve only a single term. Whatever their lofty stated reasons for promoting this stunt, their underlying message is clear: They recognize in their heart of hearts that the shelf life of McCain’s experience has already reached its expiration date.

Is a man who is just discovering the Internet qualified to lead a restoration of America’s economic and educational infrastructures? Is the leader of a virtually all-white political party America’s best salesman and moral avatar in the age of globalization? Does a bellicose Vietnam veteran who rushed to hitch his star to the self-immolating overreaches of Ahmad Chalabi, Pervez Musharraf and Mikheil Saakashvili have the judgment to keep America safe?

R.I.P., “Change We Can Believe In.” The fierce urgency of the 21st century demands Change Before It’s Too Late.