What Precisely Are YOU Afraid Of? 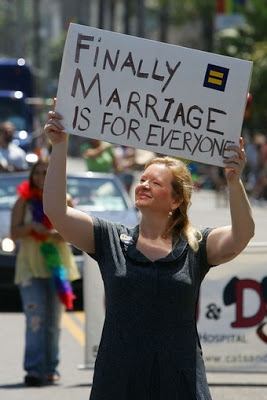 FRESNO, Calif. — Michael Bumgarner says he’s never campaigned for a political cause before, but his strong opposition to same-sex marriage has prompted him to join thousands of volunteers going door-to-door in support of a ballot initiative that would ban gay nuptials here.

“I’ve never stumped before, but I want to be a part of this,” Bumgarner said. The retired insurance executive and devout Mormon said his late mother would “turn over in her grave” if she knew that gays and lesbians could marry.

With less than 11 weeks until Election Day, supporters of Proposition 8 are ramping up their field organization and refining their message as they seek to persuade California voters to shut the door on same-sex marriage. It’s the first time voters will be asked to weigh in on the issue in either California or Massachusetts — the states where gays have won the right to wed.

An estimated 15,000 backers of the measure, most of them members of Mormon, Catholic and evangelical Christian churches, knocked on doors and distributed campaign literature to registered voters throughout the state this weekend and last, according to Jennifer Kerns, spokeswoman for the Yes on 8 campaign.

The initiative is a constitutional amendment, similar to ones already enacted in 26 other states, that would overturn the California Supreme Court decision that legalized same-sex marriage. It needs a simple majority of votes to pass.

Ron Prentice, director of the coalition of religious and social conservative groups that qualified the amendment for the November ballot, said the group has ordered 1 million yard signs and 1 million bumper stickers.

“Unless the people are angry, nothing will happen,” Prentice said. “We are going to change the Constitution and say on Nov. 4, ‘Judges, you can’t touch this.'”

For now, the campaign’s goal is to identify supporters and voters who are unaware or haven’t made up their minds about the measure, said Al Almendariz, a retired air traffic controller and a Mormon.

Almendariz led a team of five people canvassing a suburban neighborhood southeast of Sacramento on Saturday, and their script was concise. The volunteers told people who answered their doors they were with the Proposition 8 campaign, an effort that would define marriage as being between a man and a woman. They didn’t mention same-sex marriage unless a resident brought it up.

“We’re just polling — yes or no, not trying to find converts or change people’s minds,” said Christina Hirst, 28, a photographer with three young children. Hirst and her husband, Justin, 33, a high-school Spanish teacher, said they joined the door-knocking Saturday because they don’t want their children hearing about gay relationships at school.

The literature that volunteers distributed was intended to reinforce the campaign’s message that the amendment is “pro-marriage and children” instead of anti-gay.

“California should do more to encourage families to stay together,” reads the pamphlets illustrated with close-ups of heterosexual couples posed cheek-to-cheek.

Frank Schubert, who is co-managing the Yes on 8 campaign, said the outreach effort is designed to counter the principle message of gay rights advocates, who are portraying the upcoming vote as a matter of fairness and equality.

“They want people to feel like you are a bad person if you support what has been the definition of marriage since the dawn of time,” Schubert said. By having face-to-face conversations about why the amendment is necessary, organizers hope to reach potential supporters who may worry that voting for the measure would get them labeled as “bigots or homophobes,” he said.

Bumgarner distributed handouts listing “Six Consequences if Proposition 8 Fails” that volunteers were encouraged to use as talking points. They included warnings that ministers who preach against same-sex marriage could be sued for hate speech, churches would be sued for refusing to host wedding ceremonies for gays, and that “children in schools will be taught that same-sex marriage is OK.”

The amendment’s opponents dispute those claims, saying that the Supreme Court specifically exempted churches from having to participate in same-sex weddings and that nothing in state law requires teachers to discuss marriage — straight or gay — with students.