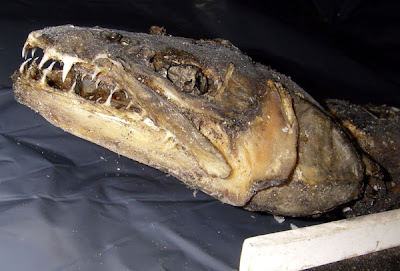 More than 4,000 fish dead of unknown causes
Brigham City, Utah — It looks like something from the swamps of a science fiction movie, not from Pioneer Park.

The remains of an unidentified aquatic species that appears to have been carnivorous were found near the shoreline of the Pioneer Park Pond in Brigham City.

The fish was found along with the remains of more than 4,000 other fish that died from unknown causes.

Bernie Develin, of Ogden, found the fish March 19 and reported it to the Division of Wildlife Resources.

DWR biologists are stumped as to what kind of fish it is and are seeking outside help to identify it.

Aquatics biologist Matt McKell sent photos of the fish to other biologists.

“It’s different than anything any of us have seen. It’s definitely not native,” he said. “Nobody that’s seen the photos can identify the fish, either.”

The approximately 21-inch-long fish sports sharp teeth, but is missing its fins and tail, making it difficult to identify.

The fish carcass was in bad shape when McKell recovered it, and he believes it may have been run over by a car.

The reason for the deaths of the other fish in the pond is also still unknown.

McKell said one possibility is that someone may have dumped something in the pond. However, results from a water analysis revealed no chemicals.

Drew Cushing, warmwater sport fish and community fisheries coordinator, believes that the kill was caused by thick ice blocking light to the vegetation in the pond, causing aquatic plants to decay.

As the plants decay, they absorb oxygen, leaving nothing for the fish to breathe, and they suffocate under the ice.

“Those fish looked like they’ve been dead for a long time,” he said. “Our thought is that it’s a winter kill.”

Of the species found, only the trout, catfish, bluegill and largemouth bass were placed there by the DWR.

Cushing said there may be some benefit to the fish die-off because nonnative and unproductive species are now cleared from the pond.

He said the unknown fish may have been an aquarium pet placed in the pond when it was smaller, and it just grew over time.

This is a problem that continues regardless of attempts to educate the public about the dangers of introducing nonnative fish into local waters, he said.

The angler who found the fish doesn’t believe the fish die-off theory. The 62-year-old has been fishing in Utah his whole life and has seen the effects of many winter kills.

“It doesn’t make sense to me that the winter kill killed off every fish in the water,” Develin said.

“That kill was not from a lack of oxygen. I could not believe how many dead fish there were and how many species.”

Develin believes some sort of parasite may have been in the water. He’s concerned that children who wade there could be in danger.

He also believes the unknown species may have left the water on its own.

“I believe that he actually worked his way up on the bank.

“This thing looks like something you would see in a prehistoric scary movie.”