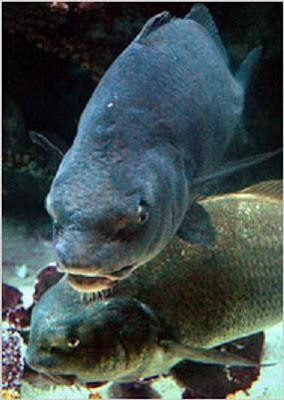 Mating calls of the black drum can carry through sea walls and into homes. Photo by Steven Senne/AP.
What’s Making That Awful Racket? Surprisingly, It May Be Fish.
By Nonny De La Peña / April 8, 2008

It was the end of January 2005, during the spawning season for a fish appropriately called the black drum. Nightly mating calls were at a crescendo. But no one living in the area seemed to realize the din was of aquatic origin.

The retirees who had come to spend their winters relaxing on the gentle estuaries and canals of the Gulf Coast in Florida blamed the municipal utility system. They were pushing the City Council to pay an engineering firm more than $47,000 to eliminate the noise reverberating through their homes.

Then James Locascio, a doctoral student in marine science at the University of South Florida, rescued the city from financial folly. After reading the newspaper article, Mr. Locascio called a Council member just hours before a vote to appropriate the money. He explained that at 100 to 500 hertz, black drum mating calls travel at a low enough frequency and long enough wavelength to carry through sea walls, into the ground and through the construction of waterfront homes like the throbbing beat in a passing car.

“Black drum have taken a liking to the canal system in Cape Coral,” Mr. Locascio said. “Their nightly booming is like a water drip torture that lasts for months.” (Listen to the mating calls of the black drum and other fish sounds.)

At first residents wouldn’t buy it. “The most vocal and persistent complainers said that there was no way a fish could produce a sound that could be heard inside a house,” he recalled.

Mr. Locascio and David Mann, a marine biologist at the University of South Florida who is a bioacoustics expert, recruited these naysayers into a study by asking them to score noise levels and times in notebooks. “We took their data and plotted them with the fish sounds we had recorded with hydrophones under the water,” Mr. Locascio said. “Concordance was perfect.”

A similar situation unfolded two decades ago in Sausalito, Calif., when houseboaters were inundated with toadfish calls. The Marin Independent Journal said in an editorial, “We don’t believe for an instant that the drone keeping Sausalito houseboaters awake at night is caused by a bunch of romantic toadfish humming their version of the Indian Love Song.”

Greg Coppa, a retired high school science teacher, was also greeted with derision when he said he heard noisy fish while boating near Block Island in Rhode Island. “Some people even asked what I drank before hearing the sounds or gave me that look reserved for a good but pathetically impaired friend,” Mr. Coppa said, laughing.

With the help of Rodney A. Rountree, a senior scientist at the research company Marine Ecology and Technical Applications and an adjunct assistant professor at University of Massachusetts at Amherst, Mr. Coppa learned that the fish he had imagined to be a massive sea creature was actually the tiny striped cusk eel, which can sound like a jackhammer.

Naturalists as far back as Aristotle have known that fish make sounds. But when Jacques Cousteau titled his 1956 documentary “The Silent World,” it seemed that he captured the public’s imagination about underwater life while leaving our ears deaf to fish barks, chatter, groans, drones and cries.

“His diving tanks masked all the sounds in the water,” Dr. Rountree said. “In fact, the oceans are a noisy place.”

Yet of the 30,000 species out there, only about 1,200 sound producers have been cataloged, and far fewer have been recorded. Even common goldfish have merited just two scientific publications. In fact, said Philip Lobel, a professor of biology at Boston University, “Most aquarium fish are sonic. Keeping fish in an aquarium is like keeping a canary in a soundproof cage.”

The most definitive tome on fish sounds was published in 1973 by the auspiciously named Marie Poland Fish and William H. Mowbray. Working at the Narragansett Marine Laboratory at Rhode Island University, they were granted access to Navy audio recordings made to detect enemy submarines. Because noisy underwater life kept interfering with the military’s objectives, the authors were asked to tease out the biologic from the manmade. The resulting work, “Sounds of Western North Atlantic Fishes: A Reference File of Underwater Biologic Sounds,” identifies the vocalizations of over 150 fish.

For most fish, the sonic mechanism is a muscle that vibrates a swim bladder not unlike our vocal cord. The bladder is a gas-filled sac used for buoyancy, but it can also be used as a sort of drum. The Gulf toadfish contracts its sonic muscle against its swim bladder thousands of times a minute to generate a loud drone. At nearly three times the average wingbeat of a hummingbird, toadfish have the fastest known muscle of any vertebrate. Cusk eel rattle bones against their bladder, but clownfish have a sonic ligament they use to “chirp.”

Other fish use stridulation, rubbing their bones together in a way that is comparable to plinking the tines on a comb or using a ratchet mechanism on their pectoral fins to make sounds. Herring release bubbles from their anus in a “fast repetitive tick.”

Still, despite careful dissection, the sonic mechanism in many species remains a mystery.

Read all of it here.
New York Times / The Rag Blog