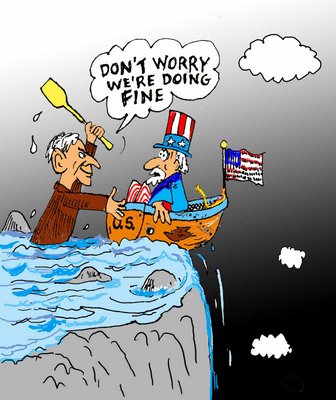 I would not send my college kid off for a semester abroad if I were you. Last week, we suspended human rights in America, and what goes around comes around. Ixnay habeas corpus.

The U.S. Senate, in all its splendor and majesty, decided that an “enemy combatant” is any non-citizen whom the president says is an enemy combatant, including your Korean greengrocer or your Swedish grandmother or your Czech au pair, and can be arrested and held for as long as authorities wish without any right of appeal to a court of law to examine the matter. If your college kid were to be arrested in Bangkok or Cairo, suspected of “crimes against the state” and held in prison, you’d assume that an American foreign service officer would be able to speak to your kid and arrange for a lawyer, but this may not be true anymore. Be forewarned.

The Senate also decided it’s up to the president to decide whether it’s OK to make these enemies stand naked in cold rooms for a couple of days in blinding light and be beaten by interrogators. This is now purely a bureaucratic matter: The plenipotentiary stamps the file “enemy combatants” and throws the poor schnooks into prison and at his leisure he tries them by any sort of kangaroo court he wishes to assemble and they have no right to see the evidence against them, and there is no appeal. This was passed by 65 senators and will now be signed by President Bush, put into effect, and in due course be thrown out by the courts.

And here’s what one of our members had to say about Highland Park Methodist Church:

I was baptized, attended Sunday school, vacation Bible school, youth groups and regular services at Highland Park Methodist Church until 14 when my parents got divorced, after which I staged my first revolt, against further participation. It was reputed to be the world’s wealthiest Protestant church. The head preacher of my youth was named Marshall Steele, a self-evident spokesman for America’s God. In the 60’s, they became notorious for barring black people from attending “services”. Their level of hypocrisy is rarely equaled. I was indelibly marked by that youthful trauma.