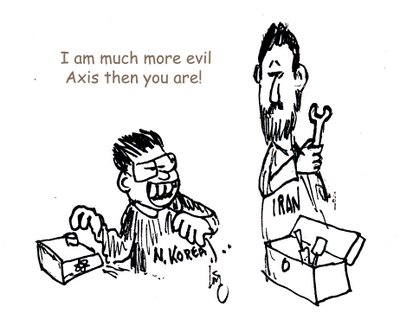 2000: director of a company which wins $200m contract to sell nuclear reactors to North Korea
2002: declares North Korea a terrorist state, part of the axis of evil and a target for regime change

The Two Faces of Rumsfeld
Randeep Ramesh
Friday May 9, 2003
The Guardian

Donald Rumsfeld, the US defence secretary, sat on the board of a company which three years ago sold two light water nuclear reactors to North Korea – a country he now regards as part of the “axis of evil” and which has been targeted for regime change by Washington because of its efforts to build nuclear weapons.

Mr. Rumsfeld was a non-executive director of ABB, a European engineering giant based in Zurich, when it won a $200m (£125m) contract to provide the design and key components for the reactors. The current defence secretary sat on the board from 1990 to 2001, earning $190,000 a year. He left to join the Bush administration.

The reactor deal was part of President Bill Clinton’s policy of persuading the North Korean regime to positively engage with the west.

The sale of the nuclear technology was a high-profile contract. ABB’s then chief executive, Goran Lindahl, visited North Korea in November 1999 to announce ABB’s “wide-ranging, long-term cooperation agreement” with the communist government.

The company also opened an office in the country’s capital, Pyongyang, and the deal was signed a year later in 2000. Despite this, Mr Rumsfeld’s office said that the de fence secretary did not “recall it being brought before the board at any time”.