Gay Bishop Gene Robinson a No Show on HBO 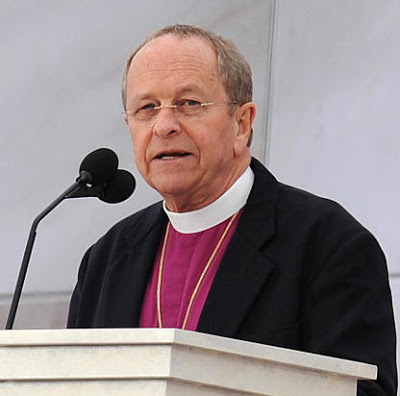 Bishop Gene Robinson: If a tree falls in the forest… Photo by Robyn Beck / AFP.

Bishop Gene Robinson asked the nation to pray for the “understanding that our president is a human being and not a messiah.” But only the people AT the concert heard that, because HBO did not televise Robinson’s message.

See Video and full text of Bishop Robinson’s speech at the initial Obama Inauguration ceremony, Below.

[The following article includes updates to include information available at the time of posting.]

After days of controversy and outrage from the religious right, openly gay Episcopal Bishop Gene Robinson opened Barack Obama’s inauguration concert on the National Mall today with a request that the nation pray for “understanding that our president is a human being and not a messiah.”

But only the people AT the concert heard that, because HBO did not televise Robinson’s message. Who engineered this blackout of Robinson? I suspect we’ll hear lots about this in days to come.

It turns out that a lot the people at the concert did NOT hear Robinson either. There were sound “difficulties” and most of the estimated 500,000 in the audience could not hear his invocation. Only those very close to the stage could hear.

The 7 p.m. rebroadcast of the show was identical, no Gene Robinson.

The full text of Robinson’s prayer is here. If you’d like to express your unhappiness to HBO, you can do that here. My gut tells me the call was made elsewhere.

AfterElton.com has spoken to HBO, who says the decision to cut Robinson was made by the Obama transition team.

Contacted Sunday night by AfterElton.com concerning the exclusion of Robinson’s prayer, HBO said via email, “The producer of the concert has said that the Presidential Inaugural Committee made the decision to keep the invocation as part of the pre-show.” Uncertain as to whether or not that meant that HBO was contractually prevented from airing the pre-show, we followed up, but none of the spokespeople available Sunday night could answer that question with absolute certainty. However, it does seem that the network’s position is that they had nothing to do with the decision.

Somebody seated near the stage recorded Robinson’s invocation:

A Prayer for the Nation and Our Next President, Barack Obama
By The Rt. Rev. V. Gene Robinson / January 18, 2009

[Gene Robinson is the Episcopal Bishop of New Hampshire. The following is the full text of Bishop Robinson’s speech at the opening event of Barack Obama’s Inauguration ceremonies, delivered at the Lincoln Memorial, Washington, DC.]

Welcome to Washington! The fun is about to begin, but first, please join me in pausing for a moment, to ask God’s blessing upon our nation and our next president.

O God of our many understandings, we pray that you will…

Bless us with tears – for a world in which over a billion people exist on less than a dollar a day, where young women from many lands are beaten and raped for wanting an education, and thousands die daily from malnutrition, malaria, and AIDS.

Bless us with anger – at discrimination, at home and abroad, against refugees and immigrants, women, people of color, gay, lesbian, bisexual and transgender people.

Bless us with discomfort – at the easy, simplistic “answers” we’ve preferred to hear from our politicians, instead of the truth, about ourselves and the world, which we need to face if we are going to rise to the challenges of the future.

Bless us with patience – and the knowledge that none of what ails us will be “fixed” anytime soon, and the understanding that our new president is a human being, not a messiah.

Bless us with humility – open to understanding that our own needs must always be balanced with those of the world.

Bless us with freedom from mere tolerance – replacing it with a genuine respect and warm embrace of our differences, and an understanding that in our diversity, we are stronger.

Bless us with compassion and generosity – remembering that every religion’s God judges us by the way we care for the most vulnerable in the human community, whether across town or across the world.

And God, we give you thanks for your child Barack, as he assumes the office of President of the United States.

Give him wisdom beyond his years, and inspire him with Lincoln’s reconciling leadership style, President Kennedy’s ability to enlist our best efforts, and Dr. King’s dream of a nation for ALL the people.

Give him a quiet heart, for our Ship of State needs a steady, calm captain in these times.

Give him stirring words, for we will need to be inspired and motivated to make the personal and common sacrifices necessary to facing the challenges ahead.

Make him color-blind, reminding him of his own words that under his leadership, there will be neither red nor blue states, but the United States.

Help him remember his own oppression as a minority, drawing on that experience of discrimination, that he might seek to change the lives of those who are still its victims.

Give him the strength to find family time and privacy, and help him remember that even though he is president, a father only gets one shot at his daughters’ childhoods.

And please, God, keep him safe. We know we ask too much of our presidents, and we’re asking FAR too much of this one. We know the risk he and his wife are taking for all of us, and we implore you, O good and great God, to keep him safe. Hold him in the palm of your hand – that he might do the work we have called him to do, that he might find joy in this impossible calling, and that in the end, he might lead us as a nation to a place of integrity, prosperity and peace.

Thanks to Jeff Jones and S. M. Wilhelm / The Rag Blog