Giving Up Something in Solidarity with Their Kids

Perhaps we can convince George W. Bush to show a little solidarity with some of these folks by giving up something near and dear to his heart, just the way golf was before he so generously ditched it to show solidarity with the American families who were losing sons and daughters in Iraq.

What a guy !! I spit on your shadow, Junior, you fuckin’ hypocrite. 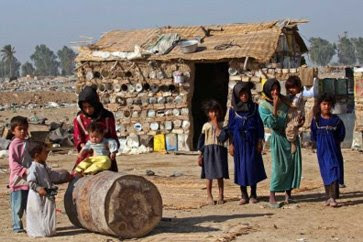 BAGHDAD — Iraq, which has the world’s third-biggest oil reserves, is making billions of dollars in oil exerts thanks to record-setting prices. Still, many of its citizens sell parts of their own bodies just to survive.

“I couldn’t see my children crying for food and I can not get them at even bread,” Ali Hassnawi, a 34-year-old Baghdad resident, told IslamOnline.net.

“One day a friend of mine told me he had sold his kidney and I decided to do the same,” he recalled.

Abject poverty in oil-rich Iraq has driven many like Hassnawi and his wife to a growing organs black market, where kidney is the most sought-after.

Prices vary between $500 to $5,000 dollars depending on and urgent the kidney is needed.

According to the Health Ministry, renal disease is common in the country and more than 7,000 Iraqis currently need urgent kidney transplants.

“The lives of many Iraqis are threatened because haemodialysis machine are old and many aren’t working properly,” stressed Taha Abdel-Rahman, a ministry media officer.

“We have a long list of patients requesting kidneys and in many times when they can get the organ, they are already dead.”

Iraq, which is a member of OPEC and has the world’s third-biggest oil reserves, earned $38 billion in oil export revenue last year.

For 2008, the country has already raked in $20 billion from oil shipments just through April, according to the US Energy Department.

Read all of it here. / Axis of Logic / Uruknet

This entry was posted in RagBlog and tagged Iraq, Poverty. Bookmark the permalink.