Global Economy in an Inverted World 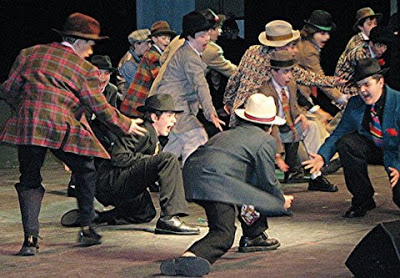 Guys shooting craps in musical “Guys and Dolls.”
The Stock Market :
Shooting Craps From the Left
By Steve Russell / The Rag Blog / June 5, 2008

[The following comments by Rag Blog contributor Steve Russell are followed by an Op-Ed piece from the New York Times by Roger Cohen titled “The World is Upside Down.”]

The left should pay more attention to stock markets. The markets have tales to tell even for people who have no interest in investments, who think the whole idea of pooling capital (the therefore stock) is immoral.

My own take is that stock ownership is no more inherently immoral than shooting craps and has the advantage that, unlike shooting craps, it can actually be constructive. I’ve been fooling with it as a retirement hobby.

I have some paper losses but the only realized loss I have was a Latin American mineral exploration stock that I dumped for a purposeful loss when two countries were massing troops on their common border. I figured their stocks tanking might help settle things down.

Conventional wisdom is that 1/5 to 1/3 of one’s portfolio should be outside the US. In fact, there are many economies growing much faster than the US. Peru was the winner last year. But for a balance of growth and managed risk, the happening thing is BRIC—Brazil, Russia, India, China.

I’m trying to avoid China and Russia because they are still struggling with a rule of law, and investment where there is no rule of law is worse than a crapshoot. As to China, there’s another problem. The price of oil is eating up China’s price advantage in manufacturing. This does not affect Russia because it has oil and it does not affect Brazil or India because the basis for their growth is internal, servicing their rising middle class. China is more dependent on trade and the trade is getting hammered by transportation costs.

So I own a few shares of Tata Motors, which makes the cheapest car in the world and the only one that runs on compressed air, and Sify Technologies, which is building internet cafes all over India. I also own some shares of Brazilian iron ore.

Funny, I still don’t feel like a capitalist, but I do feel that watching business news gives me information I’m not used to having. Below, a great metropolitan newspaper opines about the fall of the American Empire.

RIO DE JANEIRO — For a while the world was flat. Now it’s upside down.

To understand it, invert your thinking. See the developed world as depending on the developing world, rather than the other way round. Understand that two-thirds of global economic growth last year came from emerging countries, whose economies will expand about 6.7 percent in 2008, against 1.3 percent for the United States, Japan and euro zone states.

The sharp rise in prices for energy, commodities, metals and minerals produced mainly in the developing world explains part of this shift. That has created the balance of payments surpluses fueling dollar-dripping sovereign wealth funds in the gulf and East Asia. They amuse themselves picking up a stake in BP here, a chunk of Morgan Stanley there, and why not a sliver of Total.

We of the developed-world Paleolithic species are fair game for the upstarts now, our predator role exhausted. The U.S. and Europe may one day need all the charity they can get.

To place this inversion in focus, it helps to be in Brazil, where winter (so to speak) arrives with the Northern Hemisphere summer, and economic optimism, as exuberant as the vegetation, increases at the same brisk clip as U.S. foreclosures.

Huge offshore oil finds, a sugarcane ethanol boom, vast reserves of unused arable land, mineral wealth and abundant fresh water contribute to Brazilian buoyancy. But natural resources are only part of the story. As in China and India, an expanding internal market is bolstering growth. So is increasing corporate sophistication and global ambition.

At the annual National Forum, a gathering of business leaders, I felt like a first-world pipsqueak as leaders of the national energy company Petrobras (bigger than BP, Shell and Total) and Companhia Vale do Rio Doce, or C.V.R.D. (the world’s second largest mining company), reeled off head-turning statistics.

Petrobras, which has spearheaded Brazil’s push to self-sufficiency from heavy dependence on imported oil 30 years ago, will more than double oil production to 4.2 million barrels a day in 2015 from 1.9 million barrels today.

Roger Agnelli of C.V.R.D. waved away the United States (“It’s full of debt”) to focus on the company’s ambitions in Asia. It was imperative to be there, he said, because that’s where growth, capital and ambition are. China, he noted, will account for 55 percent of iron ore consumption, 31.6 percent of nickel, and 42 percent of aluminum by 2012. Case closed.

Like many other big emerging-market corporations, C.V.R.D. has been on a buying spree. It’s not just sovereign wealth funds that are acquiring first-world companies these days. It’s the new giants of the NAN (Newly Acquisitive Nations).

Emerging-market mergers and acquisitions are up 17 percent this year to $218 billion, while for the rest of the world they’re down 43 percent to $991 billion, according to Thomson Reuters.

That deal is being challenged by Grupo Mexico, creating a Latin-American-Asian fight for a U.S. company.

If you have trouble getting your mind around that, try standing on your head.

That’s also a good position from which to view India’s Tata Motors agreeing to buy Land Rover and Jaguar from Ford for $2.3 billion, or Tata Steel’s acquisition last year of the Anglo-Dutch Corus Group steel company for $12 billion.

Globalization is now a two-way street; in fact it’s an Indian street with traffic weaving in all directions.

“In an inverted world, not only have developing economies become dominant forces in global exports in the space of a few years, but their companies are becoming major players in the global economy, challenging the incumbents that dominated the international scene in the 20th century,” said Claudio Frischtak, a Brazilian economist and consultant.

A shift in economic power is under way to which the developed world has not yet adjusted. Of course the G-8 and the permanent membership of the U.N. Security Council need to be expanded to reflect this change. The 21st century can’t be handled with 20th-century institutions.

That’s obvious. Less obvious is how the United States, which underwrites global security at vast expense, begins to share this burden, so that the new multi-polarity of wealth is reflected in a multipolarity of security commitments.

Headstands are in order for the next U.S. president.

This entry was posted in Rag Bloggers and tagged Economy, Global Economy, Investments, The World. Bookmark the permalink.

3 Responses to Global Economy in an Inverted World