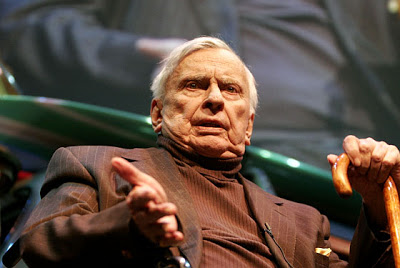 Gore Vidal in 2007. Photo courtesy of Getty Images.
‘Even from the corpse of the Republican Party, which Abraham Lincoln left somewhat hastily in the 19th century, this was an unusually sickening display.’
By Gore Vidal

October proved to be the cruelest month, for that was the time that Sen. McCain, he of the round, blank, Little Orphan Annie eyes, chose to try out a number of weird lies about Barack Obama ostensibly in the interest of a Republican Party long overdue for burial.

It is a wonder that any viewer survived his furious October onslaught whose craziest lie was that Obama wished to become president in order to tax the poor in the interest of a Democratic Party in place, as he put it in his best 1936 voice, to spend and spend because that’s what Democrats always do. This was pretty feeble lying, even in such an age as ours. But it was the only thing that had stuck with him from those halcyon years when Gov. Alfred M. Landon was the candidate of the Grand Old Party, which in those days was dedicated to erasing every policy of Franklin Delano Roosevelt, whose electoral success was due to, they thought, Harry Hopkins’ chilling mantra, “we shall … spend and spend and elect and elect.” Arguably, the ignorant McCains of this world have no idea what any of this actually signifies; Hopkins’ comment is a serious one, and serious matters seldom break through to cliché-ridden minds.

Although I am no fan of the television of my native land, I thought that an election featuring two historic novelties—the first credible female candidate for president and the first black nominee—would be great historic television, yet I should have been suspicious whenever I looked at McCain’s malicious little face, plainly bent on great mischief. Whenever Obama made a sensible point, McCain was ready to trump it with a gorgeous lie.

When Obama said that only a small percentage of the middle class would suffer from income tax during his administration, McCain would start gabbling the 1936 Republican mantra that this actually meant that he would spend and spend and spend in order to spread the money around, a mild joke he has told for the benefit of a plumber who is looking forward to fiscal good fortune and so feared the tax man, using language very like that of long-dead socialists to reveal Obama’s sinister games.

Advice to Obama: No civilized asides are permitted in McCain Land, where every half-understood word comes from the shadowy bosses of a diabolic Democratic Party, eager to steal the money of the poor in order to benefit, perversely, the even poorer.

So October (my natal month) was no joy for me, as the degradation of our democratic process was being McCainized. McCain is a prisoner of the past. Later, in due course he gave us the old address book treatment: names from Obama’s past, each belonging to a potential terrorist. Even from the corpse of the Republican Party, which Abraham Lincoln left somewhat hastily in the 19th century, this was an unusually sickening display.

Happily, physicists assure us that there is no action without reaction.

There were still a few bright glimmers of something larger than a mere candidate of the Republican Party, but Mr. McCain seems to be in the terminal throes of a self-love that causes him to regard himself as a great American hero. From time to time, he likes to shout at us, “I have fought in many, many wars,” and, “I have won many of them,” but he has, so far, never told us which were the ones that he has actually won, since every war that he has graced with his samurai presence seems to have been thoroughly lost by the United States. Consistency is all-important to the born loser as well as to the committed liar.

So what little fame he has rests on the fact that he was taken a prisoner of war by the Vietnamese—hardly a recommendation for the leadership of the “free world”—and thus aware of the meagerness of his own curriculum vitae, for his vice presidential choice he then turned radically, in the age of the awakening to power of women, to an Alaskan politician; a giggly Piltdown princess out of pre-history.

Her qualification? She has once been mayor (or was it “mare”?) of an Alaskan village and later governor of what had been known as “Seward’s Icebox,” named for Lincoln’s secretary of state, William Seward, who had over the misgivings of many bought all that ice from Russia.

One does get the impression that the senator from Arizona is living in a sort of echo chamber of nonsensical phrases, notions and unreality.

To further add insult to injury, as it were, he describes himself as a “maverick,” which one critic in the audience assures him he is not, anyway, like the great Maury Maverick, a New Deal congressman from Texas who was so dedicated to freedom that he allowed his cattle to roam unbranded, freely on the range—a tribute to a time when Texans were freer than now in the post-Bush era.

The critic in the audience said that he was no maverick in the usual sense on the ground that he was simply a sidekick. That just about sums it up: Sidekick to the only president we have ever had who lacked any interest in governance.

As we are going through a religious phase in this greatest of all great nations, I am reminded of Chancellor Bismarck’s remark about us Americans in the 19th century when he said: “God looks after drunks, little children and the United States of America.”

1 Response to Gore Vidal : John McCain in the Echo Chamber