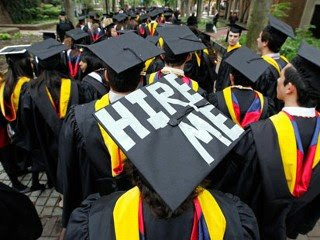 Grads at University of Pennsylvania commencement ceremonies May 18, 2009. Fewer than 20 percent of new graduates have landed work, compared to 50 percent two years ago. Photo by Matt Rourke / AP.

The problem with higher education is that few can predict where the economy will be hiring years from now.

I think it is common in many Third World countries for highly educated folks to drive taxis. It looks like that situation is probably coming here as a common situation.

The problem with higher education is that few can predict where the economy will be hiring years from now. Higher education investment is largely a guess when it comes to the needs of the future economy.

In the years ahead, the U.S. will be groping with trends toward survival basics that are now becoming apparent. Like rebuilding the transportation infrastructure, reducing carbon burning through serious conservation and planning higher energy costs, caring for the elderly in a much more cost effective way, and relocalizing agricultural production.

There is plenty of opportunity ahead for well-trained experts in these emerging but vital areas of the economy to do such work. But our higher education system is grounded on the theory that the richest and most powerful (mostly) men appointed to, in our case, the UT-Austin Board of Regents are qualified to guide the lines of training, research, and degrees bestowed. The current system is very much biased towards making the wealthy and their friends ever richer by bankrolling the exhausted trends of a failing empire.

If higher education were to rebuilt on a rational basis of what skills are likely to be needed, the problem of future higher education employment could be largely solved, if not the ability to provide for a traditional upper class lifestyle, still expected by graduates in business administration, law, and the like. We need education geared toward sensible, sustainable goals. Trying to sustain the old higher education/anticipated lifestyle goals of students’ parents is futile.

Hopefully students are beginning to figure that out.

HARTFORD, Conn — Casey Savage graduated from Trinity College in Hartford with a 3.8 grade-point average and honors. What he doesn’t have is a job.

It’s a familiar refrain being echoed at colleges and universities across the country, as the economy continues to slump and layoffs, furloughs and pay cuts dominate the employment landscape. The struggling economy means college seniors are facing one of the toughest job markets in years.

According to a survey from National Association of Colleges and Employers, the class of 2009 is leaving campus with fewer jobs in hand than their 2008 counterparts. The group’s 2009 Student Survey found that just 19.7 percent of 2009 graduates who applied for a job actually have one.

Bryan Hopkins, a senior at the University of Florida, calls the situation frustrating. “You feel frustrated because you feel now that was it all worth it,” he said. “In a perfect world, I would have walked right off the stage and into a fulltime job in my field, but I mean I have the degree now and I am still waiting.”

Yale University School of Management professor Lisa Kahn said recent college graduates will suffer the long-term effects of this recession much more than their counterparts who graduated in boom times.

Departing seniors are “suffering from the recession like everyone else is, but the effects are going to stay with (them) for much longer,” Kahn said.

Tougher Times Ahead for Grads

Kahn studied the impact of the recession in the 1980s and found that seniors who graduated then were still feeling the impact 20 years later. Today’s seniors are “going to be earning much less than their counterparts who graduated in better times and they’ll be in lower level occupations,” she said.

University of Arizona senior Reyna Nowaczyk said the lack of job prospects has left her “overwhelmed.”

“I don’t know what to do next,” she said. “I’ve done all the right things: done my fair share of internships, studied abroad. I’ve studied languages while abroad. I have my letters of recommendation from employers. I feel like I prepared myself; I feel like I’m ready. I want to work.”

But according to employment professionals, graduating seniors will need to be flexible in this economy.

That’s advice Trinity graduate Chauncy Kerr is taking. She is looking to land an unpaid internship this summer.

“You get job experience so I’m excited about that,” Kerr said. But, she added, “It would be nice to get paid.”

This entry was posted in Rag Bloggers and tagged Campuses, Economy, Unemployment. Bookmark the permalink.