Greening Up the Co-operative Movement 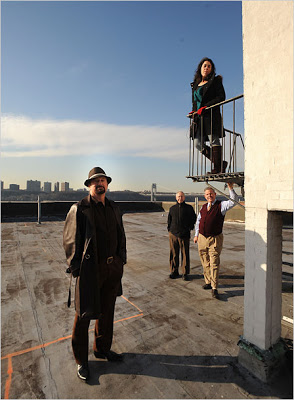 Seated at an oval table with spreadsheets and calculators at the ready, the six-member board of River Arts, a 244-unit co-op development in Washington Heights, mulled over the pros and cons of investing in solar power.

Ed Lloyd, the board president, was not convinced that the co-op would get its initial investment back.

“I don’t want us to be all caught up in green and end up in the red,” he said. “I’m as environmentally conscious as the next person but we can’t base it all on that.”

Jack Fogle, a resident who had worked for more than a year with the co-op’s energy committee to sell the idea, pressed on.

“If we take the risk, that money will pay us back for the next 30 years,” said Mr. Fogle, who is also the building’s manager.

The politics at residential buildings, which are notoriously contentious, have become even more so as environmental issues have entered the fray. At many co-ops and condominiums, the members of energy and green committees lobby and cajole their neighbors to embrace projects that sometimes require upfront money, like solar panels, but more often just demand interest and effort on the part of residents, like recycling correctly.

It can be a thankless job that sometimes is met with indifference, skepticism and even outright hostility. But environmentally motivated residents say they operate on the theory of, “If I don’t do it, who will?” as it was put by Sharon Lee Ritchie, who started a green committee in her co-op in Harlem.

While more fervent advocates can gravitate toward weighty projects — a green roof or solar panels, for example — mundane measures can make more of an impact, experts say. But no matter what the investment, environmental consciousness can be a tough sell in a bad economy, especially when it can takes years to recoup the initial cost for some projects.

At River Arts, one argument that was used to sell the board on the idea of solar energy was the savings achieved by Cabrini Terrace, another co-op in Washington Heights, which went solar in 2007 and shared its figures with the River Arts board.

Frank Rathbun, a spokesman for Community Associations Institute, a national group that represents homeowner associations, said that if co-op boards “can show savings, the homeowners are going to be a lot more receptive.”

That has been the case at River Arts, which overlooks the Hudson River on Riverside Drive. In 2007, members of an energy committee had pushed to install solar panels to produce part of the building’s electricity, but the board balked because it would take 10 years to recover the investment through energy savings, Mr. Fogle said.

Since then, new federal, state and city tax credits have become available, reducing River Arts’ net cost of a $400,000 system to $10,000 — meaning it would take about one year for the co-op to recover the investment, Mr. Fogle said. The co-op expects its solar power to eventually reduce energy costs by $7,000 a year. At a committee meeting in January to plan the presentation for board members and shareholders, tensions rose as discussions stalled on details like how much information shareholders needed to hear about the timeline for the project.

“People! People!” Mr. Fogle shouted. “You don’t need to give people more than is necessary.” He walked out of the room, returning a few minutes later in a calmer state.

Finally, at a meeting in February, the hard work seemed to be paying off.

“Financially, it sounds like the numbers are reasonable,” conceded Mr. Lloyd, the board president.

There is little question that the green movement has gained significant traction in recent years.

In New York, city officials say residential buildings produce more carbon dioxide emissions — 30 percent — than any other large sources of emissions, such as commercial buildings or transportation. Nearly two-thirds of those emissions come from the use of electricity and natural gas.

Scott M. Stringer, the Manhattan borough president, said he knew interest in greening buildings was high when he called a conference on the topic in late 2007 and a standing-room-only crowd of 500 people came.

“The green-building movement is now commonplace,” he said. “It’s a combination of economics, saving the environment and this whole notion that the measures we take enhance the quality of life,” he said.

Yet there are still battles to be fought, and not all of them related to money. At River Arts, part of the challenge is to win over apathetic residents.

One member of the energy committee, Julie Ruben, said that an informational meeting on the idea for solar in December drew barely a dozen people. The co-op residents will ultimately have to vote to approve the plan.

And at another co-op building in Washington Heights, the residents’ input was nearly avoided altogether at first. Yonah Zur, 31, a musician who lives with his wife and young son, got a compost pile going in his co-op’s backyard with the knowledge of only the few members of the building’s garden committee. He said that compost bins are often mistakenly assumed to smell and attract rodents, and he worried about the reaction from the rest of the owners.

“I wanted to make it work and then show the neighbors,” Mr. Zur said.

After eight months of composting food scraps and leaves by himself in a spot not visible from most of the building’s 120 units, Mr. Zur put up signs in the elevator last May, announcing a garden clean-up and a compost lesson. Now as many as 10 apartments use four compost bins. But one neighbor did not like the aesthetics of a tall bin that held a pile of leaves outside her window.

“She was complaining about the look of it,” Mr. Zur said. The problem was solved by moving the bin eight feet away from the neighbor’s apartment.

Many of those pushing for greening buildings argue that any step, no matter how small, helps create a commitment that can lead to more ambitious undertakings.

Ms. Ritchie, the co-op owner in Harlem, said that she did not feel it was realistic to go for big energy projects when her 241-unit co-op in Harlem already has a list of must-do capital projects. So she turned her attention to “doable” things like a clothing and fabric recycling program, partnering with Wearable Collections, a local business that does curbside pickups. 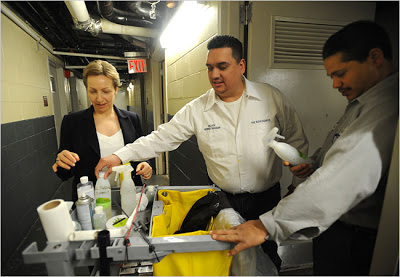 Experts from the U.S. Green Building Council, a nonprofit group that certifies buildings for energy efficiency and other environmental features, say that it is the unglamorous measures that are beneficial but often overlooked. Those include insulating steam pipes, sealing leaks around windows, weather-stripping doors, investing in a gas-fired boiler or co-generation, sub-metering electricity so owners pay for their own consumption, or even making sure lights are not left on all the time.

Ms. Ritchie, who owns an event planning and design business, said she convinced a skeptical building superintendent — “just humor me for a week,” she told him — to try out eco-friendly cleaning products, which come in such highly concentrated formulas, she said, that they now save the building $500 a month in cleaning supplies.

Still, for almost two years, her building’s green committee had only one member: Ms. Ritchie. “I just think people are busy and they’re happy to participate without spending any of their time,” she said of her rewarding but lonely greening experience.

She was overjoyed this month when seven new volunteers agreed to join her committee.

This entry was posted in RagBlog and tagged Cooperative Movement, Eco-Systems, Environment. Bookmark the permalink.

1 Response to Greening Up the Co-operative Movement