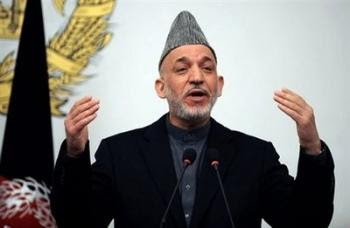 WASHINGTON — The US and its European allies are ­preparing to plant a high-profile figure in the heart of the Kabul government in a direct challenge to the Afghan president, Hamid Karzai, the Guardian has learned.

The creation of a new chief executive or prime ministerial role is aimed at bypassing Karzai. In a further dilution of his power, it is proposed that money be diverted from the Kabul government to the provinces. Many US and European officials have become disillusioned with the extent of the corruption and incompetence in the Karzai government, but most now believe there are no credible alternatives, and predict the Afghan president will win re-election in August.
President Karzai has failed to root out corruption and government incompetence Link to this audio

A revised role for Karzai has emerged from the White House review of Afghanistan and Pakistan ordered by Barack Obama when he became president. It isto be unveiled at a special conference on Afghanistan at The Hague on March 31.

As well as watering down Karzai’s personal authority by installing a senior official at the president’s side capable of playing a more efficient executive role, the US and Europeans are seeking to channel resources to the provinces rather than to central government in Kabul.

Another diplomat said alternatives to Karzai had been explored and discarded: “No one could be sure that someone else would not turn out to be 10 times worse. It is not a great position.”

The idea of a more dependable figure working alongside Karzai is one of the proposals to emerge from the White House review, completed last week. Obama, locked away at the presidental retreat Camp David, was due to make a final decision this weekend.

Obama is expected to focus in public on overall strategy rather than the details, and, given its sensitivity, to skate over ­Karzai’s new role. The main recommendation is for the Afghanistan objectives to be scaled back, and for Obama to sell the war to the US public as one to ensure the country cannot again be a base for al-Qaida and the Taliban, rather than the more ambitious aim of the Bush administration of trying to create a European-style democracy in Central Asia.

Other recommendations include: increasing the number of Afghan troops from 65,000 to 230,000 as well as expanding the 80,000-strong police force; ­sending more US and European civilians to build up Afghanistan’s infrastructure; and increased aid to Pakistan as part of a policy of trying to persuade it to tackle al-Qaida and Taliban elements.

The proposal for an alternative chief executive, which originated with the US, is backed by Europeans. “There needs to be a deconcentration of power,” said one senior European official. “We need someone next to Karzai, a sort of chief executive, who can get things done, who will be reliable for us and accountable to the Afghan people.”

Money and power will flow less to the ministries in Kabul and far more to the officials who run Afghanistan outside the capital – the 34 provincial governors and 396 district governors. “The point on which we insist is that the time is now for a new division of responsibilities, between central power and local power,” the senior European official said.

No names have emerged for the new role but the US holds in high regard the reformist interior minister appointed in October, Mohammed Hanif Atmar.

The risk for the US is that the imposition of a technocrat alongside Karzai would be viewed as colonialism, even though that figure would be an Afghan. Karzai declared his intention last week to resist a dilution of his power. Last week he accused an unnamed foreign government of trying to weaken central government in Kabul.

“That is not their job,” the Afghan president said. “Afghanistan will never be a puppet state.”

The UK government has since 2007 advocated dropping plans to turn Afghanistan into a model, European-style state.

Richard Holbrooke, the US envoy for Afghanistan and Pakistan, who will implement the new policy, said it would represent a “vastly restructured effort”. At the weekend in Brussels, he was scathing about the Bush administration’s conduct of the counter-insurgency. “The failures in the civilian side … are so enormous we can at least hope that if we get our act together … we can do a lot better,” he said.