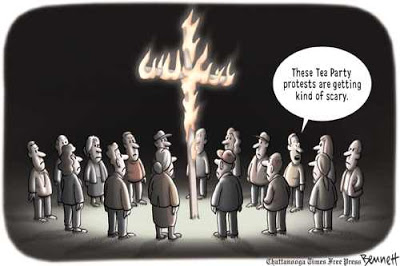 Call me evangelist for anti-racist conversion and apologist for conversations that would get us there.

“Well, let’s face it,” says John McWhorter of the Manhattan Institute speaking Sunday on CNN’s State of the Union with Candy Crowley, “when people say that they are supposed to be in a national conversation on race, they do not mean an exchange of the kind that we are having right now. What they mean is a conversion.

“Nobody puts it in so many words,” says McWhorter, “but the way that conversation is supposed to go is that white America is supposed to realize that the civil rights revolution wasn’t enough, that structural racism, et cetera, still remains prevalent, and that there is still more admitting that needs to be done and probably some sort of second civil rights revolution.

McWhorter was careful not to include all Black people in his review of those who are no longer interested in a national conversion. If structural racism does not correspond to modern reality what is McWhorter’s account for why CNN needs him on camera this week? Or why Latino activists are stretched between Phoenix and Washington this week trying to push back an anti-civil rights stampede?

This month’s national conversation — not conversion — has to do with two swift responses to NAACP President Ben Jealous, who raised the question: is Tea Party racism structural or accidental? In reply, the National Tea Party Federation “flatly rejected” the charges made by Jealous, inferring that he was the one guilty of racism. Then two prominent Tea Party activists retaliated against the NAACP.

In the first case of retaliation, a prominent Tea Party organizer put out a minstrel-style parody of Jealous. In the second case, a prominent Tea Party propagandist found video from an obscure NAACP address in Georgia, sliced the message up, and provoked reflexive national denunciations of a Black woman who had actually said something quite profound.

Meanwhile, the National Tea Party Federation, three days after flatly rejecting any knowledge of racism in its ranks whatsoever, announced that it had just expelled the cross-country Tea Party Express for refusing in turn to expel a minstrel wannabe.

What the Tea Party has proven in this July heat wave is that its members share an impulse to fight back against the NAACP through mockery, deceit, and denial. To put the case more plainly, the Tea Party movement has amply answered the question that Ben Jealous posed. Its racism cannot pass for accidental.

According to McWhorter, however, white people should never have been expected to take interest in manifesting their anti-racist conversion because the structure of racism is no longer a significant part of modern reality. And so we wonder, does McWhorter’s reading of modern reality include this kind of white intransigence.

Notice the way that McWhorter uses the term “white people” in the development of an analysis that purports to deny structural racism. If “white people” and “most black people” have joined together to disavow the need for conversations that would lead to structural conversion how is this alliance of interest to be understood? Is it structural?

In his CNN appearance McWhorter conceptualized racism as “skin color animus” or what used to be called prejudice. Of course, prejudice would seem to have very little explanatory power in describing the way Shirley Sherrod was treated by the Obama administration or by Jealous when she was denounced and forced into retirement on the basis of a three-minute video clip.

This leaves us to ask whether the actions of the Tea Party, the Obama administration, and the NAACP leadership could be coherently illuminated by some recognition that racism in the real world is structural.

Even many people who recognize the structural racism of the Tea Party movement want to sympathize with its apparent defense of common folk against the elite powers of Wall Street and Washington. But historians of the movement may not want to forget how the Tea Party movement was sparked into visibility by a ruckus that was televised from the floor of the Chicago Board of Trade (CBT).

“Are you listening Mr. Obama?” shouted the eminently charismatic Rick Santelli over the groans of CBT floor traders in Feb. 2009, as the daytime audience of the Capitalism Knows Best Channel (CNBC) was galvanized into a pro-capitalist protest against “public options” for housing and health care.

In its inception the Tea Party was a movement by “water carrying” mortgage holders against their own “loser neighbors” who were nothing but “water drinkers.” There was a slippery slope from the philosophy of mortgage relief and public health assistance straight down into the universal poverty of Castro’s Communist Cuba. Don’t forget that Obama had already been in office for several weeks. 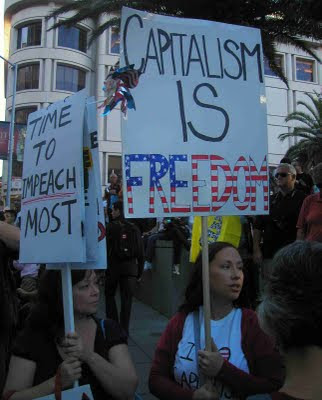 Capitalist affirmation at Tea Party gathering in San Francisco, 2009. Photo from The City Square.
Now what provoked so much fear from Chicago in the midst of a historic financial crash, as Washington and Wall Street hinted that they might have to appease the mortgage crisis? And how does our understanding of this fear relate to that thing we call the real world? The fear that ignited the Tea Party was founded upon a perception that with the Obama years we were about to experience a national lack of discipline.

From the floor of the CBT, their neighbors’ lack of mortgage discipline was intuitively extended across the crashed economy as its primary cause. Finally, the force opposed to this looming lack of discipline was named “capitalism” which was melded at gut level into the sovereign meaning of the Fourth of July. In capitalism there would be national discipline. Public options on the other hand would only bring ruin.

Soon enough the Tea Party Express was traveling across the country denouncing the kind of laxity that accompanies people who are sick, poor, and barely making rent. And where was the discipline to be found? In “free market capitalism,” of course, to which all contributors to CNBC are apparently obliged to swear loyalty oaths on videos that are played nightly on the Kudlow report.

So it’s capitalism is it? Let’s see. What does Black history have to say about the discipline of capitalism’s free market? What would a former slave have to say to Your Tea Party on any given Fourth of July? To make the claim that Fourth of July Capitalism is tantamount to moral discipline is already to expose a mind frame that is willfully negligent of Black history.

Now the point I want to make after all this recollection is actually not to be confused with anti-capitalism, because after thinking about the question for 20 years I’m not sure what the essence of capitalism comes down to. But what I do want to say is that when a movement picks up the term capitalism as the full meaning of moral discipline then what they are calling “capitalist” I am definitely against.

What Shirley Sherrod witnessed in the relationship between a poor, white farmer and a semi-wealthy white lawyer is what more people who work at the CBT need to get out and see first hand. Because if the Tea Party had been built upon experience like that, then there would be much less to worry about in terms of complicity with structural racism in the real world.

I suppose that anybody who swears by “free market capitalism” and who knows history intends to signify something in the term “capitalism” that is different from anything we have quite yet seen. They are appealing to an ideal of discipline and fairness that a “free market” would make manifest if it were allowed to exist in pure form.

But the problem with “pro-capitalist” movements is that they practically — which is to say structurally — support the existing corruptions of capitalist institutions which have nothing to do with discipline or fairness. Ask any business student what they imagine they would do if some small risk of cheating had some larger likelihood of reward. In capitalism as a lived experience, there is an expectation that because others are out to cheat you, you may hold your own buyers accountable if they do not beware.

If pro-capitalist movements practically and structurally empower further expectations of unfair actualities such as predatory mortgage lending, and if they willfully talk about history as if the unfairness of capitalism means nothing so long as we’re thinking about the mere case of Black History, then we have in a Tea Party movement what many white folks recognize intuitively as a mob to keep your distance from.

McWhorter may be correct to divide the Black community between those who are interested in the conversion of structural racism and those who are not. But he is wrong to ignore the divisions in the white community that continue to mark the Tea Party as a splinter movement from which progressive whites tend to keep their distance. The latest poll shows Harry Reid’s appeal is rising, which in Nevada means that the Tea Party Express is not a train most white folks want to ride.

In the televised hugs between Sherrod and the white farmer she saved we see what a real Tea Party movement would look like. It would be a movement where the unfairness of capitalism is recognized across the racial divides and where struggles of moral discipline remain in tearful embrace.

It is not altogether an anti-capitalist movement unless you first allow the term capitalism to be defined by the Tea Party in their supremacist way. A pure anti-capitalist movement would never attempt to save the farm for the farmer. In the hug between Sherrod and her beloved white farmer, at last, the theories of Thomas Jefferson outlive his practice.

Look again at the Global Dow. On April 15, 2010 the Tea Party movement had a hundred pro-capitalist rallies announcing to the world what would be their effective definition of capitalism here on out. Investors, who are only human after all, have been taking their money out of that capitalist system ever since.

Do we need a conversion? If you accept a deeper moral realism along the lines professed by Martin Luther King, Jr., then we know that the contradictions of class and race domination shall never have the strength to live on their own. They are contradictory to the plain meaning of what a “free market” means to a liberated mind. Therefore, if there is a Tea Party that is not playing games with minstrelized concepts, or that does not put profound conclusions in the take-out bin, and that is therefore truly interested in discipline and fairness for all, then yes of course a conversion is still needed.

The plain history of our July 4 system is a story of moral discipline breathing new life into the Constitution generation after generation. Any movement that claims—as did the Tea Party movement of 2009—that the economic survivors of that year were the only ones who actually deserved to survive have revealed only their supremacist foundations. Their conversion is therefore necessary, morally and historically. Nor will there be any national progress unless those conversions are evangelized, over and over again.

[Greg Moses is editor of the Texas Civil Rights Review and author of Revolution of Conscience: Martin Luther King Jr and the Philosophy of Nonviolence. He can be reached at gmosesx@gmail.com.]