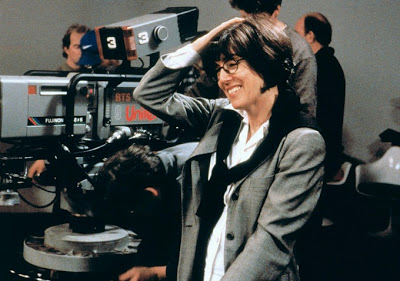 As much as she kvetches, she never whines. Her unique ability to take any pain in her life and turn it into a satiric essay or a romantic film script and have the last laugh is rare.

Nora Ephron lived a charmed life. Her parents were film writers, and she attended Wellesley. But again, she carved her own career single-handedly at a time when there were few bankable women directors in Hollywood (Penny Marshall and Barbra Streisand come to mind).

Her foray into film began as a scriptwriter when she decided to take a stab at writing a script for the film version of All the President’s Men with her then-husband Carl Bernstein, the book’s co-author. Their draft never made it to the screen, but the experience left Ephron smitten with screenwriting — something she said she’d never do because her parents had been script writers.

My first exposure to Ephron’s work came in 1983 with a book (Heartburn) and a movie (Silkwood). While Silkwood was her first collaboration with Mike Nichols (I consider Ephron to be Elaine May’s long-lost soul sister separated at birth), it was the book that had me reading non-stop. Heartburn was a poisoned dart aimed at then husband Bernstein’s cheating that led to an acrimonious divorce. Its opening lines typify her later style.

She can’t date because, like the real life Ephron, she is seven months pregnant when she discovers her husband’s infidelity. As much as she kvetches, she never whines. Her unique ability to take any pain in her life and turn it into a satiric essay or a romantic film script and have the last laugh is rare.

At heart, Ephron loved the old Hollywood films with dashing leading men and ladies. She uses that interest in her early successful films that paired Tom Hanks and Meg Ryan, by reimagining old Hollywood classics. That was the best thing about her film work. She took You’ve Got Mail from Ernst Lubitsch’s The Shop Around the Corner and made it work 50 years later for audiences and at the box office.

Her Sleepless in Seattle was also a Hollywood remake of An Affair to Remember. Only instead of the tragic ending, the couple reunites at the top of the Empire State Building. When asked what makes a director good, she said, “The best directors love actors.”

Interestingly, her directed films focused on courtship and divorce — not marriage. For Ephron, the real drama wasn’t in the day-to-day boredom of marriage. Yet the 50-year marriage of Julia Child and her husband found its way to the center of her last film, Julie & Julia. Had Ephron mellowed or had her 20-year plus marriage to writer Nicholas Pileggi given her the relationship of her life? As she wrote in a six-word biography, “Secret to life, marry an Italian.”

Her one-liners on everything from death to the purpose of life appeared in her collected essays that were witty as they were acerbic. A latter-day Dorothy Parker or a female Woody Allen are some of the descriptions of her essay writing — especially in her last pieces for The New Yorker.

Her short, satiric film critiques of recent literary/film hits are among my favorite Ephron gems. In “The Girl with the Umlaut,” she takes aim at Steig Larsson’s Lisbeth Salander and spoofs his style in a laugh out loud manner. In “No, But We Saw the Movie,” she takes on Carmac McCarthy’s No Country for Old Men as her clueless narrator confuses Javier Bardem for Benicio Del Toro.

Food and cooking have always been a part of Ephron’s DNA. Heartburn is filled with recipes — perhaps a template for Laura Esquivel’s Like Water for Chocolate. In When Harry Met Sally, the film’s iconic line (“I’ll have what she’s having”) takes place in a restaurant, and a fellow journalist contends the famous fake orgasm scene channels Jack Lemmon’s allergy scene at a diner in the Gene Saks’ movie version of Neil Simon’s The Odd Couple.

In her collection, I Remember Nothing, she takes some pointed barbs at aging, and lists all the things she will miss and others that she won’t miss after she’s passed on. She lists Nathan’s hot dogs and bacon among the foods she’ll miss. And while some see Ephron as the quintessential Jewish yenta, she once said, “You can never have too much butter — that is my belief. If I have a religion, that’s it.”

When I saw her and sister Delia’s play off-Broadway in March, Love, Loss and What I Wore, I laughed myself silly (“Any American woman under 40 who says she’s never dressed as Madonna is either lying or Amish”) and then some when she described their play as “The Vagina Monologues without the vagina.”

Best of all, her sage entreaty to a graduating class at Wellesley: “Above all, be the heroine of your life, not the victim.”

Nora, I miss you already. Reconsider.

[Gregg Barrios is a journalist, playwright, and poet living in San Antonio. Gregg, who wrote for The Rag in Sixties Austin, is on the board of directors of the National Book Critics Circle. His play I-DJ premieres in July at Overtime’s Gregg Barrios Theater in San Antonio. This article was first published at the San Antonio Current. Contact Gregg at gregg.barrios@gmail.com. Read more articles by Gregg Barrios on The Rag Blog.] 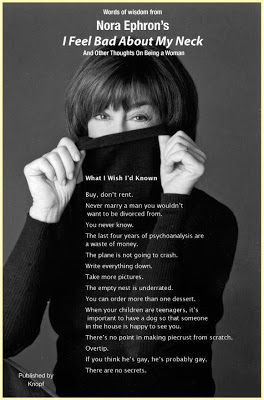