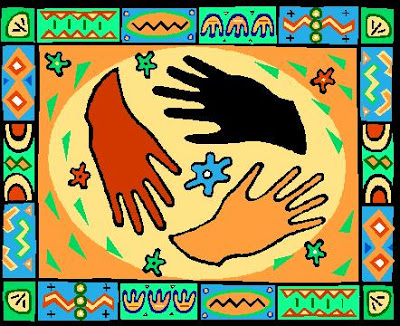 Art from race class and gender.
Similarities and differences:
The political economy of capitalism

“The War on Women has many dimensions — social, cultural, psychological — but in many ways women’s issues are class issues. That makes the war on women a class war, among other things.” — Richard Eskow, Campaign for America’s Future Blog, November 16, 2012

I was planning my latest blog entry when I saw an essay by Richard Eskow entitled “The War on Women is a Class War.” Coincidentally the subject of the political consequences of class, race, gender, ethnicity, and sexual preference was precisely the subject I wished to address.

Eskow presented compelling data to show that as income levels rise the percentage of women in the higher categories declines, cuts in anti-poverty programs disproportionately affect women, on a worldwide basis austerity measures disproportionately hurt women, cuts in Social Security and Medicare in the U.S. would punish women more than men, and finally reductions in taxes and growing inequality in wealth and income over the last decade have disproportionately benefited men over women.

As I was planning my essay I was thinking about the central features of the capitalist mode of production that has dominated most of the world since the sixteenth century and how, politically, it has made maximum use of differences to protect its fundamental features.

Marx used the term “exploitation” to refer to that system of production in which the workers produced value based upon their time and energy and the capitalists sold the products of their labor above the cost of labor.

There has always been conflict over how much workers were to be paid and ultimately who would control the work process, the technology, and the profit. Marx called this “class struggle.”

Because of unequal political power there was a tendency for wages to decline except when workers joined together and fought for the improvement of their lives. Creating divisions among male and female workers and workers of different races and ethnic backgrounds often weakened workers’ struggles to achieve economic justice.

Capitalism regularly endured crises as demand for products and places to invest profits declined and profits became so large that capitalists could not figure out how to invest them to gain more profit. In our own day, capitalists shifted dramatically from producing goods and services to financial speculation and promoted political institutions to serve the needs of financialization. And politics entered the picture when the largest capitalists more or less successfully shaped political institutions to maximize their interests.

Libraries of books describe the historical development of capitalism and debate about how the system works and who benefits from it. However, what remains basic to understanding capitalism as an economic system is that it creates workers who dig the coal, harvest the crops, clean the hotel rooms, teach the kids, and do everything else to keep the system going.

In a capitalist system almost everybody is a worker and, as the system requires ever-expanding profits, the system strives to reduce the differences among the kinds of work that people do to basic units of physical and mental labor. Marx called this “proletarianization.”

A central feature of the “political” economy of capitalism is the drive to divide workers and to use the political process to reduce workers’ realization that they have fundamentally shared experiences; that they all are in one way or another “exploited.”

A signature feature of capitalist political systems is their effort to create and exacerbate differences; differences by race, gender, ethnicity, sexual preference, and spiritual identities. The old slogan puts this best: “divide and conquer.”

So today as progressives reflect on the recent election and the future, it is important to get beyond narratives that in the main emphasize difference. Eskow’s essay concerning the class war on women serves as a useful reminder that what divides us could also unite us in a common struggle.

In the months ahead we should rediscover the ways in which we share experiences as workers in a capitalist system, at the same time as we recognize different experiences based on race, gender, sexual preference, and ethnicity.

One of the intriguing ideas embedded in the notion of  “21st century socialism,” is that in a capitalist system workers are exploited in different ways and suffer different degrees of pain, but the process of exploitation has a common structure and purpose. And after long years of reflection and political practice, and many false starts, we can now integrate our awareness and respect for difference into our conceptualization of what in human experience unites us.