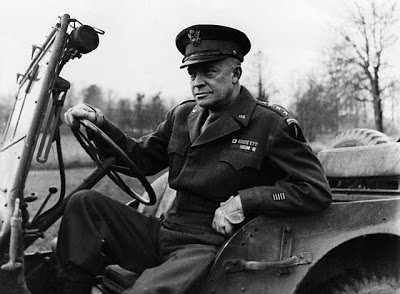 I teach about United States foreign policy from the 1940s until the Obama Administration. I do briefly discuss the emergence of the United States as a world power in the 1890s, the so-called Spanish American War and the crushing of liberation forces in both Cuba and the Philippines, and date the onset of the Cold War with the Russian Revolution and Western intervention of military forces to overthrow the new Bolshevik regime in 1917.

But my narrative is largely about the period of the Cold War and its implications for United States foreign policy since 1991.

This week I just began to discuss the foreign policy of the Eisenhower Administration. I tell the students that the trajectory of United States policy throughout much of its history is imperial but that within that general characterization different administrations have varied in their approach to the world.

What is interesting about the Eisenhower era is that the president projected competing images of imperial America. He did say upon assuming office that “every warship launched, every rocket fired signifies… a theft from those who hunger and are not fed, those who are cold and are not clothed.”

This speech made in the spring of 1953, included a plea for East-West dialogue and a diminution of the escalating tensions between the two powers, the Soviet Union and the United States. Of course, many of us remember with fondness Eisenhower’s “farewell address” warning of the encroachment of a “military-industrial complex” on American life.

But as historian Blanche Wiesen Cook pointed out in her important book, The Declassified Eisenhower (1984), the president, while passionate about avoiding a third world war, articulated and authorized very contradictory policies. Wiesen Cook reports on a document, National Security Council Document 5412, that led to policies the president adopted (they were foreshadowed by the interventionism and covert operations launched by the Truman administration in the late 1940s). The language of NSC 5412 is as contemporary as today’s news.

NSC 5412 recommended that the Eisenhower Administration continue its “overt” diplomacy, including calls for peace with the former Soviet Union. In addition, however, diplomacy should be supplemented, it suggested, by “covert operations.” Central Intelligence Agency activities should be authorized to “create and exploit troublesome problems for International Communism.”

Activities should be approved to further induce suspicion and conflict between the Soviet Union and the People’s Republic of China, exacerbate tensions inside Eastern Europe, and impair the image of the Soviet Union and “International Communism” every place in the world, including inside non-Communist nations where left political movements may hold some legitimacy.

In short, every effort should be made to develop underground resistance and facilitate covert and guerrilla operations and ensure availability of those forces in the event of war.” Specifically NSC 5412 asserted such operations should include

At the time that NSC 5412 was still secret, Eisenhower’s Secretary of State, John Foster Dulles, was proclaiming a policy of “liberation” which promised to “rollback” Communist regimes we abhorred. In addition, he made it clear that we might use “massive retaliation,” or nuclear weapons, to defend against the scourge of “International Communism.”

The rest of my course will describe United States policies in Iran, Guatemala, Hungary, and Cuba in the 1950s; the continuation of militarism on the Korean Peninsula; the escalating war in Vietnam; and U.S. policies toward Brazil, the Dominican Republic, and Chile.

When we get to the 1980s and beyond materials will be presented about Afghanistan, Iraq, Venezuela, and, in our own day, ongoing support for repression of the Palestinian people, a NATO war on Libya, and claims about Iran producing nuclear weapons. Attention will be given to the U.S. global presence reflected in 700 bases in 38 countries supplemented by private contract armies everywhere and a military budget that is half that of the world.

In a recent example of media complicity with government distortion, Howard Kurtz, a television pundit who moderates a show critiquing the media, reported that a West Coast radio station played a narrative by a man claiming to have been a soldier in Iraq who killed numerous innocent civilians.

So I have to conclude from my own lectures that the historical record of United States foreign policy is defended by repeated lies; for example about who we were protecting in Korea and if two U.S. vessels in Vietnamese waters were attacked by North Vietnamese PT boats.

In addition, the foreign policy establishment, both government and media, claimed that Juan Bosch and Salvador Allende were agents of International Communism, that Palestinians had no claim to the land from which they were ejected, and anti-government rebels in Afghanistan were freedom fighters. Both government spokespersons and the media communicated uncritically the claim that Iraq had weapons of mass destruction.

To assist misrepresentations organizations funded by the National Endowment for Democracy proclaim that they in fact represent the interests of the people in countries in which they covertly operate.

Therefore, ever since the onset of the Cold War, as NSC 5412 codified in 1954, United States foreign policy decision-makers authorized covert operations, which if uncovered would allow them to “plausibly disclaim any responsibility.” The Kurtz example suggests that the media will
readily collaborate with such government misrepresentations.

Documents such as NSC 5412, the historical record of United States foreign policy, and news information about it, leaves little reason to believe what the American people are told by their government about its role in the world.