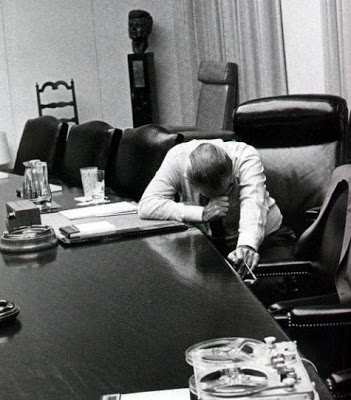 He has inherited from George W. Bush the beginnings of a horrific quagmire. How he handles it will determine, more than any other decision, his future and that of a deeply wounded nation…

Lyndon Johnson was once on the verge of becoming one of America’s greatest presidents.

But with a single wrong turn into Vietnam, LBJ plunged himself and the nation into a ghastly tragedy that still makes us all weep and bleed.

It is NOW! up to us to make sure Barack Obama does not do the same.

Even the corporate media show signs of understanding the parallels between Vietnam and Afghanistan. So many of us are alive today who remember March, 1965, and all the horror that followed, that there is simply no excuse for allowing this lethal mistake to be repeated.

LBJ inherited the momentum of the New Frontier, the murder of John Kennedy and a huge 1964 electoral mandate. He turned them into a string of civil rights and social welfare victories that still vastly enhance all our lives.

But LBJ also inherited from JFK the beginnings of the war in Vietnam. LBJ’s choice was to escalate or pull out. Recent biographies indicate he had a strong premonition that the war was futile, and that it would do him in. A century from now, historians will still agonize over why he took the plunge anyway.

Likewise, Obama’s most critical decision today does not have to do with health care or energy. There will be bills on both. How much they help or hurt us will be a matter for debate, and for future legislative and legal battles.

But there will be no gray area in Afghanistan. If Obama chains himself to some kind of “victory,” he and what’s left of our nation are doomed.

As in Vietnam, the goal would seem to be to install a regime run by the United States and to “pacify” the country into accepting it. The last foreigner to win like that in Afghanistan was Alexander the Great, about 2300 years ago. Since then the British and Soviets have been among the many to crash and burn in this “graveyard of great powers.”

When LBJ escalated, the draft cards started burning and the protests began in earnest. But it was already too late. By 1968 more than 550,000 American troops were stuck in Southeast Asia and the war raged for yet another seven years. Millions of Vietnamese and more than 58,000 Americans died. Tens of thousands were terminally traumatized. The toxic human, economic and ecological impacts still ravage both nations.

At some point, LBJ realized what he had done. His extant image is not of a victorious, canonized Lincoln or FDR, but of the exhausted shell of an on-his-way-out president, slumped over a table, listening to a tape from his son-in-law in Vietnam (the photo is by Jack Kightlinger, July 31, 1968).

Obama could all too easily share LBJ’s fate. His mandate to make change is unmistakable and his potential for success is tangible.

But another trap has been set. He has inherited from George W. Bush the beginnings of a horrific quagmire. How he handles it will determine, more than any other decision, his future and that of a deeply wounded nation that still hasn’t recovered from the Southeast Asian catastrophe.

LBJ apparently thought he could not “lose” Vietnam because right wingers would blame him for an ensuing “success of world communism.”

Despite the billions spent in blood and treasure, the last Americans fled from a Saigon rooftop on April 30, 1975. No triumphant wave of global communist aggression ensued. By 1991, due largely to its fiasco in Afghanistan, the Soviet Union and the “world communist conspiracy” definitively disintegrated.

Today’s right wingers like Condolezza Rice shout that “losing Afghanistan” will mean more terror attacks. It’s utter nonsense. But the warning, carried by the screaming Foxist media, is that unless he drags us all into Southwest Asia, Obama will be held personally responsible for all future mayhem.

Some White House advisors could well be saying the same thing, just as JFK’s “Best and Brightest” warned LBJ not to pull out of Vietnam.

Today General Stanley McChrystal plays the role of William Westmoreland, the prime architect of Vietnam’s military catastrophe. As did Westmoreland, McChrystal is telling the public an Afghan war can be won if only we “stay the course.”

In the 1980s I debated Westmoreland on two college campuses. He told me, with a poker face, that we actually “won the war” by “buying time” for a set of non-communist Southeast Asian dictators (including Singapore’s Lee Kwan Yew, Indonesia’s Suharto and Ferdinand Marcos of the Philippines, all of whom brutalized their people and stuffed billions of dollars into their personal Swiss bank accounts).

If he prevails, General McChrystal may someday have similar things to say.

But we cannot let this happen. Afghanistan cannot be controlled any more than Vietnam could. Effectively fighting terror demands an intelligent, coordinated international effort, not a blundering unilateral plunge into yet another hopeless overseas quagmire.

It also requires a revived prosperity, a winning agenda for social justice, and a Bill of Rights that is honored and in tact.

All of this is in Obama’s reach. But ONLY if he stays out of Aghanistan, and any other military quagmire that might beckon. That would include Iran, where the crisis has internationalized, and is of a very different sort.

Afghanistan, should Obama choose to go there, will be ours and ours alone, with no victory possible and no way out that does not resemble the one from Saigon.

If we had known enough to do it, we should have begun marching against the Vietnam War in 1961, when John Kennedy first committed 11,000 troops there. With a full-blown anti-war movement, perhaps we could have stopped LBJ from committing personal and national suicide in 1965.

Today we have no excuse. This administration is teetering on the edge of catastrophe. A military plunge into Afghanistan would doom Barack Obama and the rest of us to tragedy and impoverishment beyond even LBJ’s worst nightmares.

The moment is now. Health care, yes! Energy and the climate, yes!

But first and foremost: STOP THIS WAR!!!