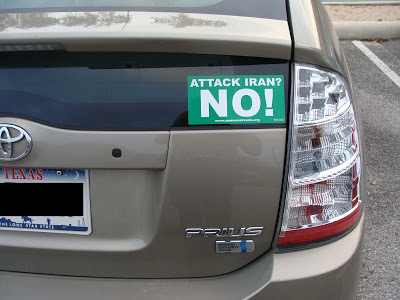 Bumper sticker on a car in Texas. Photo by Zereshk / Wikimedia Commons.
Our future depends on
stopping an attack on Iran

The global Occupy Movement has come to life just in time.

War is the health of the corporate state. The 1% needs its endless cash flow to stay in power.

As the slaughters in Iraq and Afghanistan transform into something less visible, the 1% war machine must have a new profit center. The pretext for this latest war is the spectre of a nuclear-armed Iran. It’s a tawdry rerun of the lies George W. Bush used to sell the 2003 attack on Iraq. It’s no surprise those “weapons of mass destruction” were never found — or that Bush could later joke about it.

The hypocrisy of the 1% railing against bombs allegedly flowing from Iran’s “Peaceful Atom” program comes in unholy tandem with the corporate push for a “nuclear renaissance” peddling these same reactors all over the world. (It helps to remember that the nuclear industry once tried to sell 36 “peaceful” reactors to the Shah).

Stopping the attack on Iran is absolutely vital to our hopes for social justice and democracy. The occupy movement holds the key.

The slaughter in Iraq and Afghanistan has been horrific, but pales beside the bloodshed that could come next. Iran is a far more advanced country, with 76 million people. It’s powerful, diverse, and sophisticated, with significant ties to Russia, China, India, and throughout the mideast. In the 1980s it fought a land war with Iraq that killed a million people. Does the 1% expect us to embrace a rerun?

It’s up to our newly energized grassroots movement to stop this madness before it happens.

Remember that peace movements have been critical in shaping the course of history. For example, Richard Nixon’s “secret plan” to beat Southeast Asia into submission included the use of nuclear weapons. But he refrained, in part because of his well-justified fear of a national upheaval.

Global demonstrations failed to stop George W. Bush from attacking Iraq. Today the GOP wannabes are again howling for war. There are certainly advisors within the Obama Administration arguing — as they did for Bush in 2003 — that an ongoing war might be a ticket to re-election.

We must find nonviolent ways to stop this war in Iran. Old tactics and new — time-tested strategies and ones not yet imagined — will surface and resurface in the coming months. The de facto universities, debating societies, strategizing collectives, and action groups that help define the Occupy Movement will give birth to a new generation’s means of making social change. If we work hard enough at it, one or more of them will hold the key to our future. Somewhere, somehow, the means for stopping the next war must emerge.

The truly great news is that we all are now party to every organizer’s dream: a spontaneous eruption of the global dispossessed. It is a thoughtful, sophisticated, diverse, energized populace, ready to change the world — and compelled to find the nonviolent means for doing it.

Step one is to cut off the endless military spending that is the lifeblood of the 1%, and to begin starving out the warfare state.

It’s the only way to a world built on social justice and ecological survival.

So let’s find that fork in the road… and take it. See you in the streets.

1 Response to Harvey Wasserman : Stop the Attack on Iran