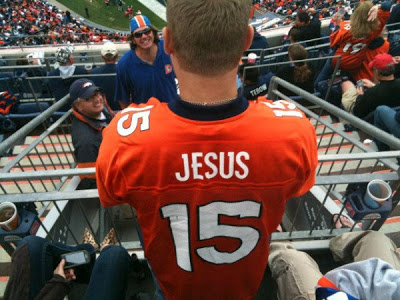 One of the hottest items on the sports marketing scene is the Tebow number 15 jersey with “Jesus” on the back.
Tebow redeemed?
Tim Tebow is awful,
but he finds a way to win

“You are what your record says you are.” It’s a classic lunch pail NFL phrase, courtesy of retired coach Bill Parcells. It means forget how good you or your team think you are. Forget your stats. Forget all the ways you came up just short. The end results define the entire journey.

It’s the amoral slogan of the sports world’s soul. It allows us to cheer for unsavory individuals and root for teams that vacuum our wallets clean. You are what your record says you are and winning excuses all.

But this consecrated commandment of sports is being challenged like never before. If you are what your record says you are, what does that possibly tell us about the man with the top jersey sales in the NFL, Tim Tebow?

The Broncos quarterback is 4-1. His presence has undeniably revived a moribund team. He has led the Broncos on winning fourth quarter drives in all four of his victories. If you are what your record says you are, then Tebow at 4-1 must be considered at this moment, one of the best.

And yet… he’s just awful. I don’t write that because Tebow is a Focus on the Family spokesperson who has a series of religiously-tinged political views I find abhorrent. I write it because I have been watching football since I was sucking a bottle, and I have two working eyes.

Tim Tebow’s completion percentage is 44.8%. Take away his magical fourth quarters and the number is closer to 30%. This kind of awful is in the “Shaq free throw percentage, Mario Mendoza batting average” sports hall of fame.

But he’s not awful in the turgid unwatchable way that, say, a Kate Hudson movie is awful. He’s fascinating/awful. He’s Reefer Madness awful. He’s old Nic Cage in Vampire’s Kiss awful. Tim Tebow throws a football like someone heaving a ham-shaped grenade. It needs to be seen to be believed. I’ve never used this phrase to describe an NFL quarterback, and hope I never have to again, but he’s “thrillingly campy.”

Watching him is like watching Sarah Palin be interviewed by someone off the Murdoch payroll. Disaster lurks, but the prurient/erotic ardor of their admirers fills the air around them and you cannot look away. The National Review’s Rich Lowery once said, presumably while crossing and re-crossing his legs, that Sarah Palin “sent little Starbursts through the screen.”

Tebow’s fans shake with the same puritanical spasms, as they wear number 15 jerseys with Jesus, instead of Tebow, stitched on the back. He’s the promise ring of NFL quarterbacks and I see a spectacle from which I cannot avert my eyes.

Thrilling and campy. In the last three games, he’s gone 9-20, 10-21, and a simply unreal 2-8 passing the ball. He’s inspired sentences like this one from ESPN’s Ian O’Connor:

As a professional football player, Tim Tebow makes no sense. He is among the most unartful dodgers in NFL history, a god-awful quarterback for about nine-tenths of your average game before voila, just like that, he is magical enough to make a New York Jets season go poof in the night.

The Denver coaching staff, who turned to Tebow after a listless 1-4 start, have turned their playbook into an index card. It’s the offensive equivalent of the flat tax. And like the flat tax, it fails miserably for the great majority.

The Broncos punted eight straight times vs. the Jets. Tebow started 6-15 passing. Yet their defense is stalwart and, more important, they believe in Tebow. In other words, they feel that if they can keep the game close, Tebow will find a way to pull it out for them in the fourth quarter. He hasn’t let them down. But how?

Denver coach John Fox has broken with decades of NFL orthodoxy by allowing Tebow to use a system that gives the quarterback the option to run the ball. Here he looks in his element, playing with purpose. Tebow is hardly a Michael Vick, but he’s big, strong, and hits an open hole as well as most running backs. He’s rushed for almost 400 yards at about seven yards a carry.

That Tebow has been given the chance to run the option is testament to his coach. It’s also a testament to the racial double standards that have historically defined the quarterback position. The best option QB’s over the decades — like Oklahoma’s Jamelle Holieway or Nebraska’s Tommy Frazier — were terrific runners and NCAA national champions, albeit with questionable arm strength. They were also African American and NFL opportunities were non-existent. If they did get a chance, like the great Brian Mitchell who was a star college quarterback, they were told to change positions.

This stereotype of what makes a good “field general” affected white option quarterbacks as well, like Heisman winner Eric Crouch of Nebraska. Despite having a set of unorthodox talents, they were told they didn’t fit the mold. When running quarterbacks showed up with the proper arm strength — like Donovan McNabb or Michael Vick — the player would be harangued by the press and coaching staff, told that they had to change their style top-to-bottom if they wanted to succeed in the NFL. They were informed that they had to drop back and run only as a last resort.

It’s good to be Tim Tebow. You get to be adored while going 2-8 passing. You get a playbook simplified and tailored to your strengths. You get to prove all your haters wrong.

But it’s not Tim Tebow who’s been redeemed. Not yet, anyway. Not after five games. Its every option QB — black or white — told that the NFL wasn’t for them. You are what your record says you are and Tim Tebow is 4-1. Let’s see, if nothing else, if this provides more opportunities for quarterbacks who in the past didn’t fit the mold and were blocked at the door.

[Dave Zirin is the author of The John Carlos Story (Haymarket) and just made the new documentary Not Just a Game. Receive his column every week by emailing dave@edgeofsports.com. Contact him at edgeofsports@gmail.com. This article was also posted to The Nation. Read more articles by Dave Zirin on The Rag Blog.]

1 Response to SPORT / Dave Zirin : The Redemption of Tim Tebow?