Surprising Facts About Who’s Watching What 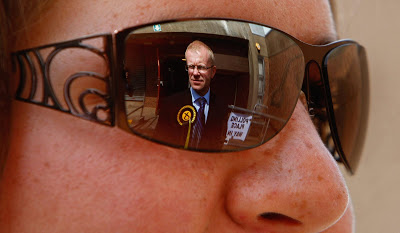 You may be surprised, as I was, that a recent poll found that more Americans than ever are paying attention to national political news. But this does not necessarily mean that American democracy is in good shape.

Here are the key summary statistics from the poll: 36 percent follow news about national politics very closely, 42 percent somewhat closely, 16 percent not too closely and just 6 percent not at all. With seemingly little newspaper readership and even relatively low numbers for network news shows, not to mention people being consumer with surviving financially, these numbers are worth attention. Especially surprising is that 6 percent figure for people not following national politics at all. Frankly, it just does not seem compatible with what usually seems like massive disinterest in politics.

Here are some other numbers that merit your consideration: those following politics very closely are just 30 percent for Democrats, compared to 41 percent for Republicans and 37 percent for independents. What’s with Democrats? Are they so happy with the performance of the Democrat controlled Congress and the White House that they do not feel it necessary to following national political news? If so, they may be far more delusional than loyal, especially if Republicans get their act together enough to make major advances in the congressional elections in 2010.

Wait, there are some more fascinating data. For men, 42 percent follow political news very closely, much higher than the 30 percent for women. Are women naturally less interested in politics, or are they just a whole lot busier?

And dig this: Older Americans, 65 and above, have a striking 46 percent following politics very closely, far greater than the 19 percent for those age 18 to 29. Young people probably have more to lose with a lousy political system than older people, but obviously are either more disinterested or cynical.

What about education level? No surprise here. Those with a high school education or less have just 26 percent paying very close attention, compared to 41 percent for college educated.

And for income level, a similar result: those making $75,000 or more yearly have 45 percent paying close attention, compared to just 26 percent for those making less than $30,000.

An awful lot of people that suffer the consequences of political decisions should be paying a lot more attention to political news. If they did, they might vote differently, if they vote at all. If corruption of American politicians by corporate and other special interests is ever to be killed, it will take a lot more Americans caring much more about political events.

This entry was posted in RagBlog and tagged Electoral politics, Partisan Politics. Bookmark the permalink.