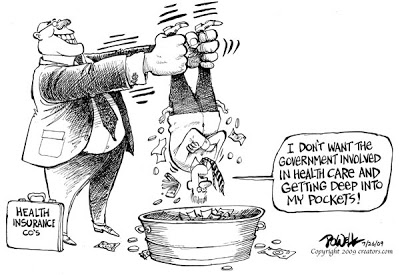 It’s becoming obvious that these Repubs and Blue Dogs have been bought off by the millions of dollars the lobbyists are throwing at them. To them, getting re-elected is far more important than providing health care for ordinary Americans.

Republicans and “Blue Dog” Democrats keep telling us there is no need for a public health insurance option. They want us to believe the private insurance companies can solve all our health care problems (even though these are the very people who have caused those problems).

It’s gotten so bad that even Democratic leaders like Harry Reid (Senate Majority Leader) is now saying a bill could be passed without a public health insurance option. Some are even saying a co-op of private insurance companies could work just as well (even though they can’t tell us how these co-ops could work as well as a public option).

It’s becoming obvious that these Repubs and Blue Dogs have been bought off by the millions of dollars the lobbyists are throwing at them. To them, getting re-elected is far more important than providing health care for ordinary Americans. Otherwise, they would not be proposing as ridiculous a concept as co-ops for private insurance. A concept that amounts to little more than a gigantic payday for private insurance companies.

I would like for the Repubs and Blue Dogs to explain to me how these for-profit private companies with huge overheads are going to solve all the problems they themselves created. The truth is they can’t explain it. That’s why they are resorting only to lies and scare tactics about public health insurance.

In the modern industrialized world, the United States is the only government that does not have a government-run single-payer health insurance system. Did you ever wonder why none of these countries have returned to a system of private insurance coverage? After all, the Repubs and Blue Dogs tell us government can’t do it as well as private business can.

The reason they haven’t gone back to a private plan is because, regardless of what the right wing says, there are some things the government does better than private companies (such as military defense, fire and rescue protection, police protection, road and bridge building and maintenance, etc.). Whether the Repubs and Blue Dogs like it or not, health care insurance is one of those things.

Don’t let them lie to you. They are far more interested in protecting the pocketbooks of their corporate masters, than in seeing you get the best health care available. A “reform” package without a public insurance option is nothing more than a continuance of the current broken system.

But it’s beginning to look like that might happen. Listen to what Majority Leader Harry Reid has to say, “It’s really premature for me to lay out what should be in this bill.” That’s not strong leadership. In fact, that’s no leadership at all. The Majority Leader should be putting his foot down right now and demanding the reform be real and actually fix our broken system. He should be demanding a public insurance option.

Tell your congressmen that any reform must include a public insurance option. If it doesn’t, it is not worthy of support.

7 Responses to Health Care : True Reform Must Include Public Option