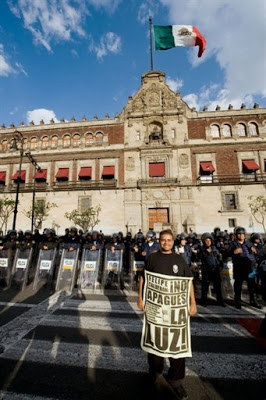 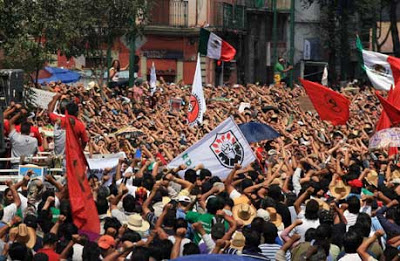 ‘With one stroke of a pen Calderon has ruined our lives.’

MEXICO CITY — During the first week of October, the increasingly unpopular government of Felipe Calderon stepped up its ongoing war of words against the Mexican Electricity Workers Union (SME), one of the nation’s oldest labor organizations founded at the apogee of the landmark Mexican Revolution in 1914 when workers repeatedly shut down the Canadian-owned Mexican Light & Power Company.

Now with the centennial of the Revolution on deck in 2010, the SME’s survival as a union is in jeopardy and it may never make it to the birthday party.

Following the nationalization of electricity generation and distribution under President Adolfo Lopez Mateos in 1960, the SME (“Esmay”) won collective bargaining agreements for the newly created Luz y Fuerza Del Centro that distributes about a fifth of the nation’s energy to Mexico City and four surrounding states.

Mexico’s second power utility, the Federal Electricity Commission (CFE), services the rest of the country and its workers are represented by a “charro” (company) union under the thumb of the Institutional Revolutionary Party (PRI) that ran the lives of Mexicans from the cradle to the grave for 71 years until it was displaced from power by Calderon’s rightist PAN in 2000.

Although the SME had longstanding ties to the PRI, it maintained a modicum of critical independence. Communists and Trotskyists wielded influence in union circles and decorated the walls of the union headquarters with proletarian murals. The Sindicato Mexicano de Electricistas has always been good for 40,000 boots on the ground when it comes to social protest.

After the 1985 Mexico City earthquake that took up to 30,000 lives, SME workers rescued victims trapped in the rubble of fallen buildings and worked tirelessly around the clock to restore power in working class colonies. In contrast, the PRI-run government abandoned “los de abajo” (“those down below”) to their own fate.

Three years ago, after hotly contested presidential elections, the SME cautiously lined up with Andres Manuel Lopez Obrador (AMLO) after Calderon was awarded victory over the leftist leader in fraud-marred balloting. Calderon has never forgiven the union’s 66,000 members — 44,000 active workers and 22,000 pensioners — for this partisan sin.

The Sindicato Mexicano de Electricistas is built on a democratic structure although it has not always been a paragon of democracy. Strikes can only be called by referendum and plebecite and negotiated settlements are ratified by general assemblies in which every vote is counted. Union officials and members of its executive board are elected every three years but the vote-taking is staggered and the union always seems to be in the process of electing its officials.

When last spring Martin Esparza, a 45 year-old veteran official, sought a third term as SME secretary-general, he was opposed by union treasurer Alejandro Munoz in an election that was redolent with mudslinging — Esparza accused Munoz of playing footsy with Calderon’s then-personal secretary Cesar Nava, now president of the PAN, and Munoz charged that his rival had pocketed moneys set aside for the construction of a new union office building.

When Esparza was re-elected by a little more than 300 out of 66,000 votes, Munoz appealed to Calderon’s hardnosed Secretary of Labor Javier Lozano not to recognize Esparza as secretary general of the SME. Lozano was eager to comply, refusing to sign a “nota de toma” or official recognition of Esparza’s re-election. As a result, Luz y Fuerza del Centro cut off all check-off dues and subsidies to the SME and the union was unable to meet its payroll.

As is union tradition, Esparza mobilized his loyalists and 10,000 workers encamped outside the Labor Secretariat in the south of the city adjacent to the Periferico or ring road, this megalopolis’s most vital traffic artery, threatening to shut it down. Rumors circulated that SME workers would “baja el switch” (diminish electricity distribution) and security forces were put on alert at the end of September — the criminalization of social protest has been the most salient feature of Calderon’s three rocky years at the wheel of state.

Javier Lozano is Felipe Calderon’s hatchet man. For the past few years, he has been seeking (with little success) to dismember the Miners and Metalworkers Union that, like the SME, dates back to the Mexican revolution. His encounters with the Chinese businessman Ye Gon are the stuff of legend — Mr. Ye alleges that the labor secretary forced him to stash $200 million USD from a Calderon slush fund in his palatial Mexico City mansion, ordering the pharmaceutical kingpin who was granted citizenship by the president’s predecessor Vicente Fox, to either “cooperate” (“coopeles” in fake Mexican Chinese) or have his throat slashed (“cuello.”) When Ye Gon rebelled, he was jailed.

The Lozano-Calderon assault on the SME obeyed the same logic. At the nub of the dispute is 1100 kilometers of fiber optics that would be run through Luz y Fuerza power lines by a private Spanish transnational — the concession was handed down by 1998 by then president Ernesto Zedillo to the Madrid-based WS Communications Corporation whose chief Mexican stockholders are two ex-energy secretaries Ernesto Martens and Fernando Canales Clariond.

For arcane reasons probably related to the reluctance of Carlos Slim, owner of the near-monopoly phone company Telmex and the richest tycoon in Latin America, the concession was repeatedly modified and did not kick in until 2008. By then, Esparza, in his second term as boss of the SME, was proposing that Luz y Fuerza be awarded the fiber optics concession for the so-called “triple play” (telephone, television, and internet) connection. 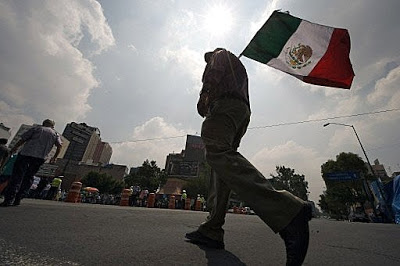 A laid-off worker carries a Mexican flag during a protest at “Luz y Fuerza del Centro.” Photo from AFP.
Saturday, October 10th: Something odd was in the air. Weather forecasts prognosticated a 40% chance of “tormentas electricas” (electrical storms.) That afternoon, Mexico would face off against El Salvador at the mammoth Azteca Stadium in the run-up to next year’s World football Cup in South Africa. The home team had already clinched a ticket to Jo’berg and the outcome against the hopelessly outgunned Central Americans was never in doubt.

Nonetheless, the nation’s two-headed television monster Televisa and TV Azteca, both of which had spent the past week trashing the SME for its workers’ “exorbitant” salaries (6000 pesos a month, about $500 Americano) and Luz y Fuerza’s over-the-top rates (the government sets the rates), launched into hours of relentless ballyhoo replete with Mariachis, fight songs, and scantily-clad cheerleaders.

The contest as expected was no contest with Mexico’s national team pouring in four quick goals. After the lopsided victory, as is traditional is this football obsessed country, tens of thousands of fans descended on the monument to the Angel of Independence on posh Reforma boulevard to celebrate and Mexico City mayor Marcelo Ebrard dispatched city cops to police the party which often gets unruly. Around 11 p.m., the police moved in to wind down the fiesta.

At the same hour and just blocks away, 5000 Army and Federal Police troops (the Federal Police is drawn from the military) were forcing their way into the central Luz y Fuerza installation and 103 other power stations in the capital and adjoining states at gunpoint. They met with little resistance from the SME skeleton crews inside the plants on a Saturday night. One worker, Fernando H., a 22-year veteran of Luz y Fuerza, had only time to grab his jacket before he was pushed into the street, leaving a mountain of memorabilia he had accumulated down the years behind. Once the plants were cleared, the Army threw up metal barricades to keep the workers at bay.

By midnight, an extraordinary edition of the Official Diary (one had never been published on a weekend before) was rolling off government presses containing President Felipe Calderon’s decree dissolving Luz y Fuerza del Centro and, as a consequence, the union that kept the state company running. Striking such a low blow on a Saturday night when no one was watching constitutes a “Sabadazo.” Remember Richard Nixon’s Saturday Night Massacre?

Sunday, October 11th: Word of the takeover flared like wildfire in the colonias where SME workers live. Everyone in Mexico but me has a cell phone now and the shocking news spread from ear to ear. Thousands were gathered outside the Sindicato‘s downtown offices on Antonio Caso Street by 3 a.m.. Martin Esparza closeted with his executive committee to decide on a plan of action. By first light, the crowd had spilled out onto the nearby esplanade of the Monument of the Revolution where the bones of the heroes of that glorious struggle are entombed.

In mid-morning, the Secretary General emerged from his inner sanctum arm-in-arm with his rival Alejandro Munoz and the two led 20,000 SME members to the heavily barricaded Interior Secretariat several blocks away. Fenced off from the old colonial building by thousands of police and army troops, the workers sat down in the street.

Meanwhile, inside the complex, Calderon’s brain trust was trying to put a happy face on the seizure of Luz y Fuerza at a tightly controlled press conference during which only the “prensa vendida” (bought-off press) was allowed to ask questions.

Gomez Montt, Cevallos’s burly law partner, postulated that the President had been forced by limited government resources to shut down the company because it had become a bottomless sinkhole of subsidies in the midst of a crushing economic downturn that had left the government without sufficient funds to even buy a fresh batch of swine flu vaccine.

The President would no longer tolerate throwing good money after bad to sustain the privileges of “elite” workers at the expense of 26,000,000 poverty-stricken Mexicans — the Calderon bureaucracy counts 26,000,000 extreme poor but most workers live in and around the poverty line and would indeed themselves descend into “extreme poverty” if deprived of their jobs as Calderon had just ordered.

Then the 350-pound finance minister Augusto Carstens took the mic to sweeten the pot. Workers who signed off on their own liquidation would receive two and a half years worth of salary — an additional bonus if they did so in the next 30 days. Carstens presented a blizzard of data to justify the 20,000,000 peso boodle that it would cost the government to shut down Luz y Fuerza — the money is thought to be drawn down from nearly a billion dollars in World Bank credits granted last April for environmental mitigation. The World Bank and the International Monetary Fund have a track record for favoring the privatization of state electricity companies in Latin America.

There were few questions from the prensa vendida.

By nightfall, once the workers had retreated from the Interior Secretariat, Felipe Calderon went on national television to explain the flimflam to the nation. His conscience was clear. He was doing the right thing for Mexico — despite the fact that he had just deprived 66,000 workers of their livelihood (the number is closer to 300,000 since each Mexican family has an average five members) in a country that has been whacked by the steepest economic downslide since the Great Depression and where unemployment now exceeds 16%.

SME veteran Fernando H. stood stiffly across the avenue from the central Mexico City Luz y Fuerza plant, staring forlornly at his now police-occupied former place of employment. “With one stroke of his pen, Calderon has ruined our lives.”

[John Ross’s monstrous El Monstruo — Dread & Redemption in Mexico City will be published by Nation Books November 3rd. Northern Californians can get an earful Friday the 13th at Northtown Books in Arcata and Modern Times on the 18th in San Francisco’s Mission District. Ross, who will also be traveling with his recently published Iraqigirl, the highly praised diary of a teenager growing up under U.S. occupation, is scouting venues for 2010. Write johnross@igc.org if you have any bright ideas.]