Health of All Is Affected by Preventable Pollution 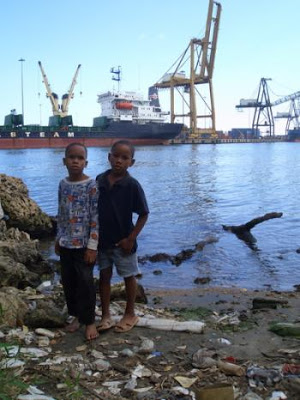 UXBRIDGE, Canada – Gold mining and recycling car batteries are two of the world’s Top 10 most dangerous pollution problems, and the least known, according a new report.

“The global health burden from pollution is astonishing, and mainly affects women and children,” said Richard Fuller, director of the New York- based Blacksmith Institute, a independent environmental group that released the list Tuesday in partnership with Green Cross Switzerland.

“The world community needs to wake up to this fact,” Fuller told IPS.

In previous years, the Blacksmith Institute has released a Top Ten list of toxic sites. The Institute continues to compile a detailed database with over 600 toxic sites and will release the world’s first detailed global inventory in a couple of years.

However, this year, rather than focus on places, it wants to bring specific pollution issues to world attention. And in particular highlight the health impacts — a 2007 Cornell University study that 40 percent of all deaths worldwide are directly attributable to pollution, he said.

Remediation and preventing much of this pollution are not only possible but cost-effective, especially when compared to other international efforts to improve health in developing countries.

Sometimes it is simply a matter of information and alternatives, as Fuller learned on a recent investigation in Dakar, the capital of Senegal, where children had died from lead poisoning. “Women from some poor areas of Dakar were hoping to make some money recycling car batteries and ended up accidentally killing their children,” he said.

In the tropics, car batteries only last a year or two and so there is a thriving recycling industry. However, much of this is done by very poor people who break open the batteries with axes and melt them down on open fires. Lead dust fills the air and children playing nearby inhaled the toxic lead dust, and some died.

“It is very difficult to die from lead poisoning, it takes an awful lot of lead,” Fuller said.

Fuller and colleagues measured the lead levels in the blood of surviving children and found levels 10 times the maximum allowed in the U.S. Lead is a potent neurotoxin and children are especially sensitive, as it affects their developing nervous systems and brains. “These are now the brain-damaged children of Dakar,” he said.

Blacksmith arranged to have the site in Dakar cleaned up but because it is an important source of income for the poor, the batteries are still collected but are now being shipped to proper recycling facilities. The World Health Organisation is trying to treat the affected children, he said.

“There is no simple, universal solution. It has to be solved on step by step, one place at a time basis,” Fuller noted.

Another of the biggest overlooked pollution issues comes from artisanal and small-scale mining involving some 15 million miners, including 4.5 million women and 600,000 children, the report finds. As much as 95 percent of the mercury used to recover the gold ends up in the environment. That mercury represents 30 percent of all mercury emitted into the global environment each year from all sources including power plants, according to the U.N. Industrial Development Organisation.

“It’s an enormous problem that transcends boundaries. That mercury ends up in the tuna we eat here in North America,” Fuller said.

Mercury is another potent neurotoxin and is dangerous in extremely small quantities. Hundreds of kilogrammes are used every day for gold recovery. “Artisanal miners are the poorest of the poor and you can’t just tell them to stop,” he said.

There are safer and more effective ways of recover gold using a simple tool called a “retort” but education and retraining is required. Blacksmith and its partners have had good success in teaching and then paying a leader in the community to train local miners on the safer technique.

“It doesn’t take that much money to solve these pollution problems,” he said.

And the pollution that affects the health of nearly a billion people and impairs countries’ economy development could be fixed in just 20 to 30 years with a concerted effort by the international community. “Governments are becoming interested in this. I’m cautiously optimistic,” Fuller said.

Education and other international development assistance efforts will fail without reducing the pollution burden that affects the mental and physical capacity of so many people. Even with a downturn in the global economy, the argument for cleaning up pollution is so “compelling that it will not stop countries from taking action”.

“Clean air, water and soil are human rights,” he said.

The World’s Worst Pollution Problems list is unranked and includes:

• Groundwater contamination: pollution of underground water sources as a result of human activity

• Artisanal gold mining: small scale mining activities that use the most basic methods to extract and process minerals and metals

• Metals smelting and other processing: extractive, industrial, and pollutant-emitting processes

• Radioactive waste and uranium mining: pollution resulting from the improper management of uranium mine tailings and nuclear waste

This entry was posted in RagBlog and tagged Environment, pollution. Bookmark the permalink.