Well, here’s a story, in his own words, of a criminal who walked away from his crimes scot free. That makes a fairly strong case that all the criminals currently in the White House and other parts of the federal administration will also walk away scot free. Once again, shame for my heritage.

This archive is remarkable, and contains all the transcripts of Kissinger’s secret tapes. 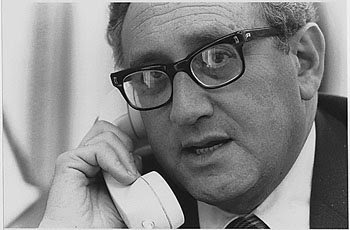 “We can bomb the bejesus out of them all over North Vietnam.” Archive Publishes Treasure Trove of Kissinger Telephone Conversations
Edited by William Burr / December 23, 2008

Comprehensive Collection of Kissinger “Telcons” Provides Inside View of Government Decision-Making; Reveals Candid talks with Presidents, Foreign Leaders, Journalists, and Power-brokers during Nixon-Ford Years
National Security Archive Electronic Briefing Book No. 263 – Part 1
Washington, D.C. – Amidst a massive bombing campaign over North Vietnam, Henry Kissinger and Richard Nixon candidly shared their evident satisfaction at the “shock treatment” of American B 52s, according to a declassified transcript of their telephone conversation published for the first time today by the National Security Archive. “They dropped a million pounds of bombs,” Kissinger briefed Nixon. “A million pounds of bombs,” Nixon exclaimed. “Goddamn, that must have been a good strike.” The conversation, secretly recorded by both Kissinger and Nixon without the other’s knowledge, reveals that the President and his national security advisor shared a belief in 1972 that the war could still be won. “That shock treatment [is] cracking them,” Nixon declared. “I tell you the thing to do is pour it in there every place we can…just bomb the hell out of them.” Kissinger optimistically predicted that, if the South Vietnamese government didn’t collapse, the U.S. would eventually prevail: “I mean if as a country we keep our nerves, we are going to make it.”

The transcript of the April 15, 1972, phone conversation is one of over 15,500 documents in a unique, comprehensively-indexed set of the telephone conversations (telcons) of Henry A. Kissinger—perhaps the most famous and controversial U.S. official of the second half of the 20th century. Unbeknownst to the rest of the U.S. government, Kissinger secretly taped his incoming and outgoing phone conversations and had his secretary transcribe them. After destroying the tapes, Kissinger took the transcripts with him when he left office in January 1977, claiming they were “private papers.” In 2001, the National Security Archive initiated legal proceedings to force the government to recover the telcons, and used the freedom of information act to obtain the declassification of most of them. After a three year project to catalogue and index the transcripts, which total over 30,000 pages, this on-line collection was published by the Digital National Security Archive (ProQuest) this week.

Kissinger never intended these papers to be made public, according to William Burr, senior analyst at the National Security Archive, who edited the collection, Kissinger Telephone Conversations: A Verbatim Record of U.S. Diplomacy, 1969-1977. “Kissinger’s conversations with the most influential personalities of the world rank right up there with the Nixon tapes as the most candid, revealing and valuable trove of records on the exercise of executive power in Washington,” Burr stated. For reporters, scholars, and students, Burr noted, “Kissinger created a gift to history that will be a tremendous primary source for generations to come.” He called on the State Department to declassify over 800 additional telcons that it continues to withhold on the grounds of executive privilege.

The documents shed light on every aspect of Nixon-Ford diplomacy, including U.S.-Soviet détente, the wars in Southeast Asia, the 1969 Biafra crisis, the 1971 South Asian crisis, the October 1973 Middle East War, and the 1974 Cyprus Crisis, among many other developments. Kissinger’s dozens of interlocutors include political and policy figures, such as Presidents Nixon and Ford, Secretary of State William Rogers, Governor Nelson Rockefeller, Robert S. McNamara, and Soviet Ambassador Anatoli Dobrynin; journalists and publishers, such as Ted Koppel, James Reston, and Katherine Graham; and such show business friends as Frank Sinatra. Besides the telcons, the Kissinger Telephone Conversations: A Verbatim Record of U.S. Diplomacy, 1969-1977 includes audio tape of Kissinger’s telephone conversations with Richard Nixon that were recorded automatically by the secret White House taping system, some of which Kissinger’s aides were unable to transcribe.

A series of unforgettable moments are captured in the transcripts, not least involving Kissinger’s complex and difficult relationship with Richard Nixon. Repeatedly, the national security adviser used his skills in flattery and connivance to help build up the president’s image and stay in his good graces. During the Jordan crisis in September 1970, Kissinger told the media that he had awakened the President to brief him on King Hussein’s military actions against Palestinian guerillas. But a transcript of his call to the President the next day recorded him as informing Nixon: “in light of the fact that there was nothing you could do, we thought it best not to waken you.”

The telcons also illustrate other Kissinger’s efforts to spin the media, monitor and control the process of decision-making, disparage rivals, keep important associates, such as his patron Nelson Rockefeller, in the loop, and win over critics:

In the April 15, 1972, conversation about bombing North Vietnam, Nixon recalled that bombing had failed to defeat Ho Chi Mhin’s forces in the past.

Nixon: “Of course, you want to remember that Johnson bombed them for years and it didn’t do any good.”

Kissinger: But Mr. President, Johnson never had a strategy; he was sort of picking away at them. He would go in with 50 planes; 20 planes; I bet you we will have had more planes over there in one day than Johnson had in a month.

Thanks to Mariann Wizard and Jeff Segal / The Rag Blog