Herdshares, Melamine and the Crazed Priorites of the ‘Regulators’ 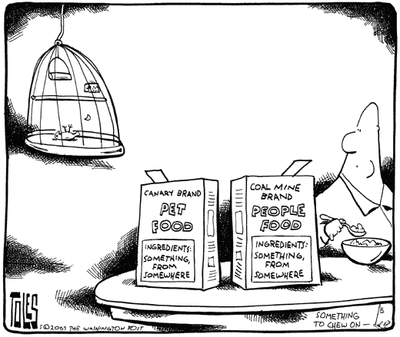 I wonder what sort of regulatory model we have arrived at that finds it commendable to break up small groups of people wanting to raise and consume a natural product with no harmful properties and yet ignores a massive, fraudulent, intentional contamination of food with industrial toxins.

[Jack Kittredge is a former political activist and SDS member who is now an organic farmer in Massachussetts. A version of this article appeared in the newsletter of the Massachussetts Chapter of the Northeast Organic Farming Association (NOFA). This is an excellent piece, pointing to the serious dangers of melamine and the skewed priorities of the FDA and other “regulators,” and we think it deserves a wider audience.]

Some friends involved with the Northeast Organic Farming Association have recently been finding and passing along fascinating (if somewhat chilling) news about developments on the industrial and local food fronts.

Frank Albani forwarded a 13-page document that is the first clear explanation I have seen on melamine. Melamine is the white powder derived from petroleum used in the production of plastic goods. It has nearly the same chemical structure as the milk protein casseinate, but with extra nitrogen ions. It has been added to milk and other foods as a very cheap way to boost the apparent protein content of the food.

If ingested, however, the extra nitrogen ions prevent the compound from being absorbed or excreted by the kidneys. It eventually forms kidney stones that block the tubes that cleanse and excrete urine. This leads to intense pain, swelling, bleeding and eventual death. Emergency surgery can remove the stones, but by then there is often irreversible kidney damage and life-long dialysis, or regular blood-washing hooked up to a machine in a hospital, is necessary.

In 2007 over 50,000 United States cats and dogs died suddenly and investigators found that pet food from China contained high levels of melamine. Starting in 2008 an increase in the number of infant kidney stone cases in China was reported. In August of 2008, the Chinese milk powder Sanlu tested positive for melamine. In September, pressured by New Zealand, China tested a broad line of milk-based food products, many of which showed melamine content. New Zealand, Australia and most EU nations issued recalls and public warnings. The US, however, remained silent.

Billions of dollars worth of milk-based Halloween and holiday candy continue to pour out of China to our shores. Some of the familiar brand names offering products containing dairy ingredients from China include: Kraft, M&M, Nabisco, Nestle, and Snickers.

So much for news on the industrial food front. On to the local angle.

Steve and Barbara Smith operate Meadowsweet Dairy in the Finger Lakes region of New York and process raw milk from their cows into products like yogurt, butter and cream for the 120 shareholding families in their herdshare. (In case you haven’t heard of herdshares, they are legal arrangements whereby consumers purchase a share of a herd of cows and hire a farmer to milk the cows and provide the consumer with the milk—or milk products—from the cow he or she already owns. The idea takes advantage of the almost universal exemption for owners of cows to legally consume their cow’s unpasteurized milk products.)

I interviewed the Smiths for the “Families and Farming” issue of The Natural Farmer in 2001 and found them to be warm and wonderful NOFA farmers and parents, and their lemon kefir simply delicious!

Despite no cases of health or other problems with Meadowsweet Dairy, however, New York’s Department of Agriculture and Markets has been trying to shut them down. In the Empire State, raw milk permits allow the farm to sell just unprocessed raw milk — no cream, butter, yogurt, or other “processed” raw milk products. They apparently see the herdshare as a ruse and an attempt to sell raw milk products outside the law.

Jill Ebbott alerted me and several others to the excellent blogs by David Gumbert regarding federal and state efforts to shut down raw milk dairies, including the Smiths’. Most upsetting when I read these was the news that a New York state court has now ruled against the Smiths, Judge John C. Egan, Jr. saying that herdshares give no exemption from regulation. He ruled that the shareholders were consumers “based on the plain meaning of the word” and that the state had the power to search the dairy, open and seize containers and products, and regulate its operations.

The state is now aggressively following up on this victory by going against other local farmers. In a late November press release the Department of Ag and Markets says their inspectors are organizing squads “dedicated to administering and enforcing the State’s food safety laws and regulations to protect the public health…”

I sometimes wonder what sort of regulatory model we have arrived at in this country that finds it commendable to break up small groups of people wanting to raise and consume a natural product with no harmful properties and which they believe is healthful for their families, and yet ignores a massive, fraudulent, intentional contamination of food with industrial toxins.

I don’t want to believe that there is a deeper villain here. Could it simply be easier to go after the Smiths and the local families they serve than to pick a fight with large corporate food companies that have lawyers and PR departments and friends in high places? Could it be that the FDA is just acting out the anti-regulatory beliefs of the Republicans while the NY zealots are responding to a liberal, Democratic and big government agenda?

Or are some of my friends right — those who believe that our public health enforcers’ fetish for sanitizing is a conscious effort to squeeze out the small farmer and food artisan, leaving only one food system, the industrial, global one. Then, with a population half sick and with no alternatives to regain natural good health, the pharmaceutical and food conglomerates will have us where they want us.

As Gumpert concludes, we have an important fight on our hands — for the sake of our health and our family’s health, we need to keep small farmers and food producers alive and thriving. And as Michael Pollan suggests, we need to stop buying any product of the food industry that needs to have a label; it is no longer a food. If enough of that happens then we can have our sustenance from men and women who know us, want our trade, and are willing to hold to high standards to deserve it.

2 Responses to Herdshares, Melamine and the Crazed Priorites of the ‘Regulators’