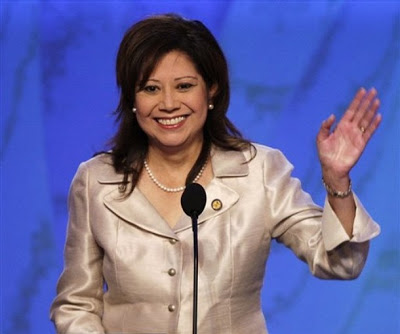 Hilda Soliz: Obama’s pick a good one.
‘The daughter of Mexican and Nicaraguan immigrant laborers, Hilda Solis brings the most solid progressive credentials of any member of the Obama cabinet — including Obama himself.’
By Roberto Lovato / December 19, 2008

In what will be the first progressive appointment of his administration, President-elect Barack Obama invited Southern California Congresswoman, Hilda Solis, to join his cabinet as the Secretary of Labor. This is especially welcome news to labor and immigrant rights groups who have constituted Solis’ primary base in her rise to national prominence.

The daughter of Mexican and Nicaraguan immigrant laborers, Solis brings the most solid progressive credentials of any member of the Obama cabinet — including Obama himself. She has won abundant praise and wide support because of her positions on labor rights, immigration issues, environmental protection and women’s rights, to name a few. Her appointment reflects the growing power and influence of the labor and immigrant struggles of Southern California and across the country as her trajectory, like that of L.A. Mayor Antonio Villaraigosa, took rapid upward turn thanks to the political energy and power unleashed after the struggles against Proposition 187 in California. For those looking for hope in the great labor and immigration struggles we’re still engaged in, look no further at what your work has wrought: Hilda Solis, Secretary of Labor.

Full disclosure: I know and have worked on a number of issues with Hilda since we fought Proposition 187 in California in the early 90’s and have, since then, found her to be nothing, if not a smart and capable fighter and an upright person. In addition to celebrating Hilda’s political capabilities, I am also likely being moved by the fact that I’ve never seen someone whose extraction so closely resembled my own (Central American immigrant unionist household) enter the Star Chamber of global power, except maybe to clean it. May she enlighten it with the warmth and brilliance of Southern California and the Américas. In sum, I can say without reservation, that this really is one to celebrate as I am about to go do as soon as the this period in my sentence drops…

1 Response to Hilda Soliz : A Progressive Choice for Labor