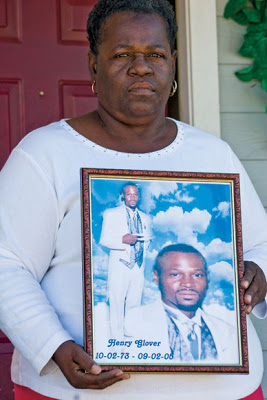 Edna Glover holds a portrait of her son, whose remains were found behind a police station in New Orleans after Katrina. Photo by Chandra McCormick and Keith Calhoun / The Nation.

‘After the storm, White vigilantes roamed Algiers Point shooting and, according to their own accounts, killing Black men at will– with no threat of a police response.’

A new report in The Nation documents what many have claimed for years — for some Black New Orleanians the threat of being killed by White vigilantes in Katrina’s aftermath became a bigger threat than the storm itself.

After the storm, White vigilantes roamed Algiers Point shooting and, according to their own accounts, killing Black men at will– with no threat of a police response. For the last three years, the shootings and the police force’s role in them have been an open secret to many New Orleanians. To date, no one has been charged with a crime and law enforcement officials have refused to investigate.

The facts are finally seeing the light of day. Now we must demand action. Given Louisiana’s horrible record when it comes to criminal justice and Black folks, it’s the only path to justice.

In the two weeks after Hurricane Katrina made landfall, the media created a climate of fear with trumped-up stories of Black lawlessness. Meanwhile, an armed group of White vigilantes took over the Algiers Point neighborhood in New Orleans and mercilessly hunted down Black people. “It was great!” said one vigilante. “It was like pheasant season in South Dakota. If it moved, you shot it.”

The Nation’s article tells the story of Donnell Herrington, Marcel Alexander, and Chris Collins — a group of friends who were attacked by shotgun-wielding White men as they entered Algiers Point on September 1, 2005. As they tried to escape, Herrington recalls, their attackers shouted, “Get him! Get that nigger!” He managed to get away. Alexander and Collins were told that they would be allowed to live on the condition that they told other Black folks not to come to Algiers Point. Herrington, shot in the neck, barely survived.

And there’s the story of Henry Glover, who didn’t survive after being shot by an unknown assailant. 2 Glover’s brother flagged down a stranger for help, and the two men brought Glover to a police station. But instead of receiving aid, they were beaten by officers while Henry Glover bled to death in the back seat of the stranger’s car. A police officer drove off in the car soon afterward. Both Glover’s body and the car were found burnt to cinders a week later. It took DNA analysis to identify the body.

Then there’s the story of White militiamen who tried to drive their Black neighbors from their homes. Reggie Bell, who lived just two blocks down the street from the vigilantes’ ringleader, was told at gunpoint, “We don’t want you around here. You loot, we shoot.” Later, another group of armed White men confronted him at his home, asking, “Whatcha still doing around here? We don’t want you around here. You gotta go.”

These are only a few of the stories of Black folks who were accosted in Algiers Point, and you can read more in The Nation. But unless you speak out, we may never learn the full extent of the violence. Journalists have encountered a wall of silence on the part of the authorities. The coroner had to be sued to turn over autopsy records. When he finally complied, the records were incomplete, with files on several suspicious deaths suddenly empty. The New Orleans police and the District Attorney repeatedly refused to talk to journalists about Algiers Point. And according to journalist A.C. Thompson, “the city has in nearly every case refused to investigate or prosecute people for assaults and murders committed in the wake of the storm.”

The Nation’s article is important, but it’s just a start. For more than three years now, these racist criminals have by their own admission gotten away with murder, while officials in New Orleans have systematically evaded any kind of accountability. We have to demand it.

Color of Change asks you to join them in calling on Louisiana Governor Bobby Jindal, Louisiana’s Attorney General Buddy Caldwell, and the U.S. Department of Justice to conduct a full investigation of these crimes and any police cover-up.

[James Rucker served as Director of Grassroots Mobilization for MoveOn.org Political Action and Moveon.org Civic Action from the fall of 2003 through the summer of 2005, and was instrumental in developing and executing on fundraising, technology, and campaign strategies. ColorOfChange.org exists to strengthen Black America’s political voice. Our goal is to empower our members—Black Americans and our allies—to make government more responsive to the concerns of Black Americans and to bring about positive political and social change for everyone.]

In this Nation Institute exclusive video, reporter A.C. Thompson talks with innocent victims and ruthless vigilantes about his expose on shootings of black New Orleans residents fleeing the city in the wake of Hurricane Katrina, and police misconduct after the storm. Video by Hidden Driver, supported by the Nation Institute.