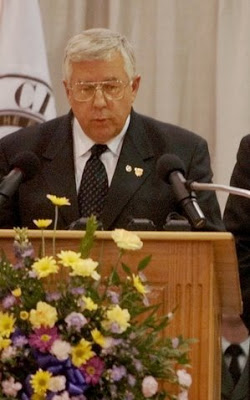 These guys on the right are intent on waging some class struggle. It’s past time to give them a taste of the real thing in return. Expose the Money behind them, and work to isolate them and take them down, and stiffen the spine of any waverers. Obama said he’d sign EFCA if it was put on his desk. Let’s make sure ‘our’ Reps don’t decide to trade it.

‘Solis has a strong reputation as a friend of labor — her father was a Teamster, and as a congresswoman, she marched on a high-profile grocery-store picket line in her Southern California congressional district.’

The nomination of Rep. Hilda Solis has yet to be approved by the Senate Health, Education, Labor and Pensions Committee — even though her confirmation hearing two weeks ago was among the first for Obama’s cabinet picks.

The committee, chaired by Sen. Ted Kennedy of Massachusetts, could not say Thursday when it would hold a vote.

Even if the committee approves Solis, her nomination could be blocked by a Republican senator on the floor.

The committee’s ranking Republican, Sen. Mike Enzi of Wyoming, has been pressing for more detailed responses to questions posed on several issues, including the Employee Free Choice Act or card check bill.

The legislation would allow workers to organize simply by handing in enough cards expressing their preference. Under card check, union membership rose steadily in the past century until 1947, when Congress, under pressure from business, began requiring secret ballot elections. Unions claim the election campaigns allow management to dissuade workers with threats. Businesses argue that card check allows unions to pressure workers unduly to organize.

When asked Thursday whether he was satisfied with the answers Solis has given, Enzi said: “What answers?”

“She doesn’t even recognize her own record when giving the answers,” Enzi said. “Right now there are people who don’t want her out of committee. It’s not just me.”

Enzi said that while senators traditionally confirm a president’s nominations, “there’s also the obligation to really get it down on paper what their beliefs are.”

Solis has a strong reputation as a friend of labor — her father was a Teamster, and as a congresswoman, she marched on the picket line during a high-profile grocery-store picket line in her Southern California congressional district.

She voted for the Employee Free Choice Act in the House in 2007. The bill later died in the Senate but is being resurrected in this Congress.

The business community has targeted defeat of the bill among its top goals this year, engaging in a multi-million dollar campaign against it. A full-page ad in Thursday’s Politico portrays congressional leaders, including Senate Majority Leader Harry Reid, as ignoring what opponents call the union “power grab.”

The bill’s progress is being watched on The Strip as it would enable workers at the remaining nonunion casino properties in Las Vegas to more easily join unions.

At Solis’ confirmation hearing two weeks ago, she repeatedly dodged questions about the bill, saying she could not express her opinion on it because she and Obama had not yet discussed the issue.

At the time, Solis’ responses seemed strategic — a way to avoid giving fodder on a hot-button issue to those who may oppose her nomination.

Enzi said he hoped the nominee would talk with the president about the bill, “get an answer, give us an answer.”

The White House did not immediately respond to a request for comment.