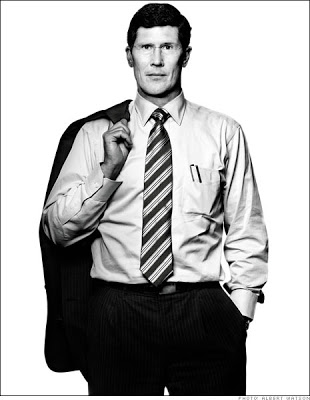 If you enjoy an item which carries a punch line — esp. one which is unexpected–then this item deserves your reading.

Clarification: a blogger started the story that the $35,000 spent by Thain for a commode was a toilet while actually a commode is a piece of furniture (a kind of chest of drawers one places in a bathroom which was originally designed for the placement of a large bowl of water with which to use for washing of the face along with towel racks place, usually, on each side). The interpretation of commode as a toilet bowl is appealing but inaccurate. Still, the item is worth the reading for the punch line.

‘Thain was CEO of Merrill Lynch, the big brokerage firm. On a good day, Merrill is worth zero. A week before it was about to go out of business, Thain sold this busted bag of financial feces to Bank of America for $50 BILLION.’

John Thain is the guy that looks like a Clark Kent doll you saw grinning from page one of your paper Friday morning. Thain was just fired by Bank of America because the square-jawed executive demanded a $30 million bonus after losing $5 billion in just three months at the bank’s Merrill Lynch unit. In addition, Thain spent over a million dollars redecorating his office while, at the same time, the U.S. Treasury was bailing out his company with billions in aid. Thain’s office re-do included the installation of a $35,000 toilet bowl.

Thain was robbed. He shouldn’t have been fired; he should have gotten a $60 million bonus — and Obama should immediately hire him as Secretary of the Treasury in place of that tax-dodging lightweight that’s been nominated, Timothy Geithner.

Thain was CEO of Merrill Lynch, the big brokerage firm. On a good day, Merrill is worth zero. A week before it was about to go out of business, Thain sold this busted bag of financial feces to Bank of America for $50 BILLION.

I’d say that’s worth a bonus.

But it gets better. When the bag broke and another $5 billion in losses were discovered at Merrill, Thain went to the U.S. Treasury and got ANOTHER $20 BILLION to cover Bank of America’s bad financial bet — from us, the taxpayers.

Now that certainly deserves a bonus. And let’s face it, a butthole that big needs a $35,000 toilet.

Instead, the guy that paid the $50 billion, Bank of America Chairman Kenneth Lewis, is keeping his job. Lewis is the same guy that just spent billions more on buying Countrywide Financial, the sub-prime mortgage loan sharks that have brought America to its knees and put Bank of America into effective bankruptcy. (Note to Mr. Lewis: the only thing worse than getting cancer is PAYING for it.)

But dumber than Lewis is the loser who OK’d paying Bank of America for its losses on Merrill, who traded a pile of turds for a stack of gold — our gold from the U.S. Treasury. That was Tim Geithner, Obama’s pick for Treasury Secretary, who’s now answering questions at Senate confirmation hearings about his funky tax filings.

Tiny Tim was head of the New York Federal Reserve Bank during the Bush regime. Along with Bush’s Secretary of the Treasury, Geithner came up with that $700 billion bail-out that loaded banks with loot on their way to insolvency. Bank of America got $25 billion of it to spend on Thain’s company Merrill. That was before the extra $20 billion was weedled by Thain.

So why, President Obama, have you given us Tiny Tim to save our sorry nation’s economic behind? What’s with that?

In another life I was an economist. Really. So here’s the economic facts of life: Our valiant young president is going to have to borrow a trillion dollars to bring our economy back from the grave. He’s got to borrow it, no choice about that. But who in their right minds will lend it to us? I can tell you the number one job of a new Treasury Secretary will be to con Saudi sheiks and Chinese apparatchiks into lending us another trillion (they’ve already lent $2 trillion).

Who in the world can talk them into it?

The answer came to me after I went this afternoon to see my proctologist, a brilliant doctor with one eye and really long fingers. (OK, I made that up.) The good doctor told me that hoary old joke about the heart and brain and rectum getting into a fight about which one was more important. When the higher organs made fun of the butt-end, the rectum went on strike. After a month, the brain and heart couldn’t take it any more — the whole body was about to explode. So they told the rectum, ‘You win.’ And the rectum said, Now you know why an asshole’s always in charge.

There’s our answer. Instead of an easily duped, incompetent weasel like Geithner for Secretary of the Treasury, what we really need is a lying bucket of evil snot, a flaming red take-no-prisoners asshole. A guy like Thain that can sell a piece of crap like Merrill for billions — twice — is just what we need to shake down the sheiks. “America for Sale! Cheap!”

And Thain comes with his own gold-plated toilet.

[Greg Palast is the co-author of Steal Back Your Vote, a comic book co-authored with Robert F. Kennedy Jr. Watch Palast’s investigative reports on BBC Television’s Newsnight and in Rolling Stone Magazine. For more info go to GregPalast.com.]