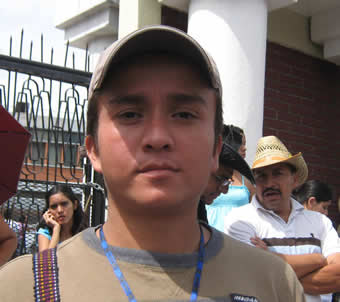 Walter Tróchez, 25 years old, a well-known LGBT activist in Honduras who was an active member of the National Resistance Front against the coup d’etat there, was assassinated on the evening of December 13, shot dead by drive-by killers.

Tróchez, who had already been arrested and beaten for his sexual orientation after participating in a march against the coup, had been very active recently in documenting and publicizing homophobic killings and crimes committed by the forces behind the coup, which is believed to have been the motive for his murder. He had been trailed for weeks before his murder by thugs believed to be members of the state security forces.

In an open letter documenting this wave of political assassinations of Honduran queers he’d written last month entitled “Increase in hate crimes and homophobia towards LGTB as a result of the civic-religious-military coup in Honduras,” Trochez had written that “Once again we say it is NOT ACCEPTABLE that in these past 4 months, during such a short period, 9 transexual and gay friends were violently killed, 6 in San Pedro Sula and 3 in Tegucigalpa.”

At the end of this open letter, Tróchez declared that “As a revolutionary, I will always defend my people, even if it takes my life.” Sadly, that’s what happened.

American University Assistant Professor of Anthropology Adrienne Pine has translated into English on her blog a statement about the Tróchez murder by the Centro de Investigación y Promoción de los Derechos Humanos (CIPRODEH — the Center for the Investigation and Promotion of Human Rights in Honduras), which you can find here.

In a moving statement about the Tróchez murder, the influential Honduran youth organization Los Necios said:

We met Walter fighting; we quickly saw within him an indisputable leader in the defense of human rights. As a member of the gay, lesbian, trans, and bisexual community he converted himself into a reference of this struggle in which the Honduran youth has developed with dedication from the breast of the Resistencia Contra el Golpe de Estado (resistance against the coup d’etat).

Recently he felt the direct threat of the fury of the irrationality, the reaction and the stupidity of the obsolete structural power that sadly today exists in Honduras. The repressive forces that serve the businessmen and kill Hondurans kidnapped him and warned him that he should silence himself, Walter, as was to be expected, said no.

It was a relief to know that he bravely escaped from the grip of the beast and it was heartwarming to see him again in the streets this past Friday 11 of December when the force of the La Resistencia was felt in the streets, of course the compañero Tróchez headed the march of the pueblo (nation). Walter Tróchez was shot in betrayal this past December 13; such is the method of cowards…”

(Full text in English of this statement is here.)

Adrienne e-mailed me that “Walter has been one of the most important figures in the LGBT community in Honduras for years. Unfortunately, most of what’s written about him is in Spanish. A volunteer is translating one of his last open letters to the resistance condemning the large number of targeted political assassinations of members of the LGBT community since the coup, which I am pasting below (in case you read Spanish). That letter will be available in English on my website…[here].”

Amnesty International has issued a statement calling for an investigation of the murder, which you can read website here.

Radio Mundo’s web site has a good article, in English, on the murder here .

Walter Tróchez’s November 16 e-mail describing assassinations of Honduran LGBTers since the coup, in Spanish, is here.

[Doug Ireland is a veteran political journalist. His blog is here.]