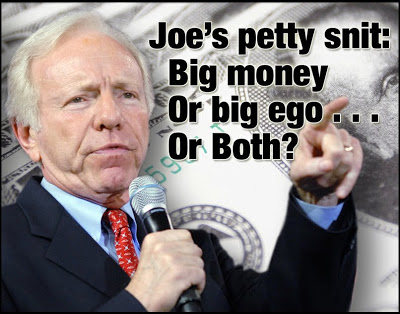 MoveOn.org, one of the largest political action committees in the country is, as I post this, just about $75,000 short of raising one million dollars for a campaign to neuter Senator Joe Lieberman’s single-handed attempt to stall or kill historic health care reform.

Their appeal for 10 bucks is unambiguous: “First, we’re going to launch a huge ad campaign to make sure every last Connecticut voter knows that Senator Lieberman is blocking strong reforms. Then, we’ll push Senate leaders to strip him of his chairmanship and seniority. Finally, we’ll work to defeat him in his next election. We can do this.”

This has resonated with enough people to make them pitch in almost one million bucks to slow down this supposedly independent Senator who lost his Democratic bid in 2006 and now seems to be representing only his mercurial petty whims instead of the state of Connecticut… which is a solidly blue state. It went 60% for Obama in 2008. Polls in Connecticut show Lieberman is already in trouble. Thirty percent of Lieberman voters in 2006 later said they would not vote for him again, and, in another poll, he trailed one possible Democratic opponent by a whopping 44 points.

Whether it is big buck political donations from the health insurance and pharmaceutical industries that has has caused his total flip flop on health care reform, or a bruised ego, is not clear. His steadily building Little Caesar rage from feeling he has been snubbed by his caucus seems to many to be driving his decisions.

While holding Democrats hostage for his crucial 60th vote he seems oblivious to his pariah status and seems willing to possibly kill health care reform before it can finish the long hammering-out process ahead. What a legacy that would be for proud, independent Joe. But he gets his gold plated Congressional health insurance plus a fat annual retirement no matter what. He and his colossal ego could ride off into the sunset with no health care worries and plenty of walking around money, happy to say to hell with America.

It has to be more than inflated chutzpah. Maybe, in his delusional state, he also sees his reelection as a sure thing because he is so right and so loved.

Or maybe he has been watching too many WWII Kamikaze movies.

If you have had enough of Loony Lieberman and want to donate a couple of bucks to the MoveOn campaign, here’s the link: