Honduras : The ‘Election’ and the Resistencia 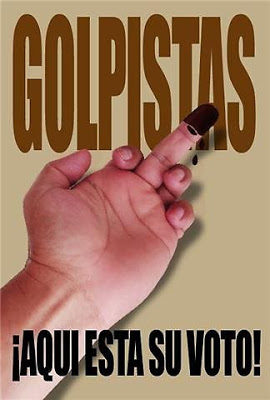 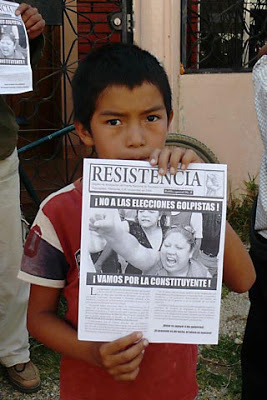 With a nod of approval from the U.S. State Department, the de facto president of Honduras, Roberto Micheletti, has announced he will take a leave of absence from office beginning on November 25 and will return on December 2, the day the country’s legislature is scheduled to convene to decide whether Manuel Zelaya should be reinstated to the presidency.

State Department spokesman Robert Wood said at a press briefing on November 20 that Micheletti’s leave will “allow some breathing space for the process in Honduras to go forward” and will “allow for the people of Honduras to focus on the elections,” to be held on Sunday, November 29.

“Micheletti hasn’t resigned,” Zelaya declared. “This is a crude maneuver, a blunder of his that stains the electoral process, that stains Honduran democracy.” And Patricia Rodas, foreign minister in the Zelaya government, warned that the golpista regime may be planning covertly to incite disorder in the country during his absence so that Micheletti can return to office early in order to make a show of restoring order, thus saving the country from the violence of anti-coup forces.

“If there should be some general disturbance of order and security that threatens the peace of the nation and the security of the Honduran people,” Micheletti declared when he announced his leave, “let there be no doubt… that I will resume my duties immediately and will order vigorously and firmly whatever measures are necessary to guarantee order.”

In the meantime, resistance to the golpista government and rejection of the elections inside Honduras and elsewhere continue unabated. As announced by the Frente de Resistencia contra el Golpe de Estado, the umbrella organization opposing the coup government, demonstrators have hindered candidates from holding campaign rallies, especially in poor and working class areas, where opposition to the coup is strongest. In particular, in the towns of La Esperanza and Intibucá, in a mountainous area of western Honduras, anti-coup residents recently prevented altogether a rally for Partido Liberal presidential candidate Elvin Santos.

The golpista government has threatened proponents of a boycott of the elections with severe reprisals. Micheletti has said anyone advocating publically for abstention will be prosecuted and that “those who create or advocate or attempt to advocate disturbances at the polling places will be dealt with seriously and severely in accordance with the law.”

A number of candidates for local offices, including many aligned with the Partido Liberal, the party of both Manuel Zelaya and Roberto Micheletti, have withdrawn from the race in protest of the coup. The leftist Partido Unificación Democrática, which has opposed the coup consistently, nevertheless decided recently not to withdraw from the race as a party, although a number of individual candidates have done so.

Honduran human rights groups report that employers are threatening to fire workers who do not vote.

In anticipation of the elections, the government has reportedly added 5,500 army reservists to the 12,000 military personnel and 14,000 members of the national police already patrolling the streets and has increased its public displays of military force, particularly in those residential areas where opposition to the coup government is strongest.

The government has instructed hospitals to prepare for an increase in patients in the next few days by emptying the wards of patients who can be discharged safely and by postponing elective surgeries.

According to La Jornada of Mexico City, the Honduran armed forces have been instructing mayors throughout the country to report leaders of the resistance living in their towns.

Outside Honduras, the United States and Panama appear to be the only countries willing to recognize the elections as legitimate, with suggestions that the U.S. will send election observers now that Micheletti has announced his leave of absence. On the continent, in addition to the Organization of American States, Brazil, Argentina, Venezuela, Bolivia, Nicaragua, Guatemala, and Ecuador have all denounced the elections as illegitimate.

2 Responses to Honduras : The ‘Election’ and the Resistencia