Ted McLaughlin : The Backpacks of Moberly 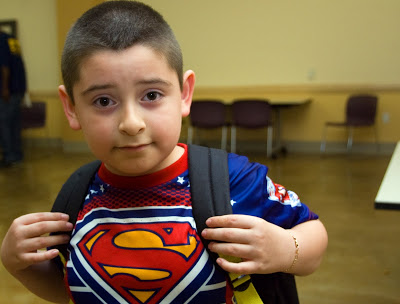 A quiet way of helping:
The backpacks of Moberly, Missouri

…we began to realize that some of these children go home to houses where they literally may not eat over the weekend. And we couldn’t just sit back and not do anything to help them.

“Every Friday afternoon, the backpacks are placed carefully on the floors of the hallways in the elementary schools of Moberly, Missouri. There are 106 of them: 106 backpacks, each of them with no child’s name and with no individual owner.”

Those are the opening words in a heart-rending story by CNN contributor Bob Greene that I recommend you read. It is a story about the harshness and unfairness of life, but it is also a story that will restore your faith in humanity.

What’s so special about those backpacks? Not much. It is what’s in them and the fact that they are placed there every Friday that makes them special.

Here’s how Francine Nichols, the staff member in charge of the backpack program, tells it, “We serve breakfast at school, and we serve lunch. But we began to realize that some of these children go home to houses where they literally may not eat over the weekend. And we couldn’t just sit back and not do anything to help them.”

So the teachers and administrators of the Moberly elementary schools started the backpack program. When a staff member learns of a student in need, they contact the parent(s), and if they will allow it, the child is added to the backpack program and is told privately that a backpack will be waiting for him/her in the hallway on Friday. Most of the food is supplied by a food bank 30 miles from Moberly.

The idea is that the child can grab a backpack, sling it over his/her shoulder and walk out with the other kids. No one says or does anything that would single out the child — there is no profit to humiliating a child in need. They just pick up the backpack and go.

Ms. Nichols says, “We’ll fill each backpack with soup, with ravioli in a can, with canned fruit, with cereal bars, with juice. We make sure that the food is the kind that a young child can prepare himself or herself, if need be. Because some of these children live in single-parent homes, and when that parent works, not only does it mean that there might not be enough food in the house, but there may not be anyone to fix the meal for the boy or girl.”

And for those of you who may be thinking the recession is getting better, the backpacks tell a different story. Last year there were 34 backpacks set out in the hall. This year there are 106 of them.

Moberly is not the only school district to try and help kids on weekends away from school. But I especially like the way Moberly does their backpack program. They go out of their way to try not to humiliate the child in need — these children face enough hardship without having to endure that.

Too often today we forget just who the poor are. The fact is that most are just decent people who are going through a tough time and trying their best to struggle through and put their lives back together. For most, the struggle is temporary and help is needed for only a finite period of time.

In our distant past, neighbors could help out by discreetly providing what was needed, and a friendly storekeeper would give and carry credit for a longer period than normal without demanding immediate payment, or a community church would help with food or rent without bragging or demanding religious devotion. But those times are gone forever.

Today, most people don’t even know their neighbors (let alone want to help them), and credit is something given only to those who really don’t need it by banks and businesses that charge exorbitant interest rates. Even churches that offer help often want to do it publicly so as to get maximum publicity for their “good deeds,” or they demand a certain fealty to their religious beliefs.

Although many right-wingers don’t want to admit it, it has become necessary today for the government to assume responsibility for helping the poor. This is right and proper, because here in America we are the government. And it is the responsibility of every citizen to help those less fortunate than ourselves.

There are still those who believe the help must come from private sources and not the government, but in our modern world that is simply not possible. Government has had to assume the responsibility because the private entities are either no longer there or have utterly failed to get the job done.

Sadly, even “we the people,” acting through our government, have not done a very good job. Although some programs like Food Stamps and Aid To Families With Dependent Children have been passed, the grinches in government have made sure those in need must humiliate themselves and dance publicly through hoop after hoop to meet the most onerous of conditions — just to receive too little help, insuring that many remain in a circle of poverty.

We could and should do much better, but we seem to prefer spending our money on wars and war materials, corporate welfare and bailouts, foreign aid which allows dictators to amass fortunes and other such nonsense.

That is why I was so impressed by the unobtrusive little backpacks of Moberly. By people wanting to help without fanfare and without humiliating those in need. Well done. We could all learn from your example.

This entry was posted in Rag Bloggers and tagged Charity, Poverty, Public Schools. Bookmark the permalink.

2 Responses to Ted McLaughlin : The Backpacks of Moberly